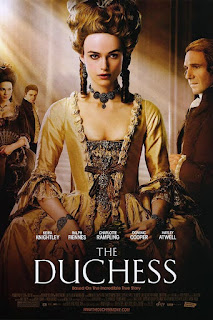 My main memory of The Duchess is seeing the trailer while watching Mamma Mia in the cinema. The first shot was Keira Knightley’s face, met with an overwhelming groan from the female-dominated audience. There is something about Knightley that seems to get people’s goat.  If you’re one of those who struggle to warm to Knightley as a performer, this probably isn’t going to be the film that changes your mind.

In the late 18th century, Lady Georgiana (Keira Knightley) marries the absurdly wealthy, but older and duller, Duke of Devonshire (Ralph Fiennes). She wants a meeting of minds. He just wants an heir. The marriage flounders – and gets worse when the Duke in turn starts an affair with Lady Bess Foster (Hayley Atwell), Georgiana’s closest friend. As her home-life becomes a menage-a-trois, with the Duke treating both women as wives (with their agreement) she begins to experience deeper feelings for the dashing Charles Grey (Dominic Cooper), an ambitious politician.

So, first things first, Keira Knightley. She does a decent job. She’s pretty good. But, rather like Jonathan Rhys Meyers, it feels like her best is a 7/10 performance. She’s dedicated, she’s really striving here – but always feels like someone trying rather than truly natural and unforced. She brings Georgina’s glamour and does a decent work of her bewildered hurt, but she (and the film) don’t communicate her intelligence and political activism, so she never really develops as a character. You can’t really put your finger on her doing anything wrong as such, it’s just a performance where you always see the acting, and never feel the naturalism.

It’s particularly noticeable here as her two supports –Fiennes and Atwell – are such accomplished performers. In many ways, the film would have been improved with Atwell in the lead. As it is, as the third corner of the triangle, she has just the right mix of guilt, warmth and mercenary self-interest. In a terrific low-key performance, Fiennes manages to turn a character the film always wants to push into being a bullying villain into a man who feels alive, real and often understandable if not (whisper it) even rather sympathetic.

The film is desperate to turn Georgiana into a suffering victim, and to push Devonshire into the role of a domestic despot. But in fact, most of Devonshire’s actions are quite forward thinking: he adopts and cares for his bastard daughter (conceived pre-marriage), he saves Bess’ children and cares for them as his own, he condones a quiet affair from his wife, he treats her with the utmost public respect and allows her to spend time with her son by another man (although this is relegated to a caption at the end). The only problem is he clearly doesn’t love her, while he clearly does love Bess. Hardly able to believe he wasn’t as besotted with Georgiana as the film is, the film works overtime to try and turn someone a little dull, with some surprisingly generous views, into a monster.

In order to make it categorical who is “right” and who is “wrong”, the film chucks in a gratuitous marital rape scene that feels so out of character and over-the-top, it actually makes you step out of the film. Did it really happen? There’s no evidence of it, and it flies in the face of virtually every other action the Duke does in the film. It’s probably also in there to further contrast Georgiana’s joyless couplings with the Duke against her passionate rumpy-pumpy with Dominic Cooper’s Charles Grey (here re-imagined as a penniless adventurer and radical, rather than the son of an Earl) Like Knightley, Cooper has the glamour and dash for the high-class Mills and Boon plot the film is peddling, but fails to convey Grey’s intellect and political ideals.

The film has deliberate echoes of Princess Diana throughout – the crowded marriage, the glamourous outsider marrying into a great family, the sense that her dashing public image made him look like a dullard. And like much of the public reaction to Charles and Diana in real life, the film can’t compute why Devonshire didn’t love this public idol, overlooking the fact that they shared no interests and had nothing in common. Many of Georgiana’s negative aspects are downplayed to help this – the gambling addiction that left her bankrupt is no more than high spirits here.

Basically this is a film interested in style over substance, aiming to turn a fascinating story about a menage-a-trois into something very straightforward and traditional about a husband who treats his wife badly. Now the style is great – Rachel Portman’s score is brilliant, the photography luscious, the make-up and costumes gorgeous – but the substance often isn’t there. The idea of Georgiana’s celebrity is only briefly touched upon, and her intellect barely at all.

Not content with airbrushing out her less appealing characteristics, even her positive ones are done few favours by this candyfloss depiction of her life – one of the first women to take a prominent role in the British political scene, a published writer of novels and poems, and a famously charismatic social figure, here she is little more than a mannequin on which to hang elaborate period hairstyles and costumes, who talks about being a free-spirited intellectual without doing anything that corresponds with these interests.

It shoves in dramatic events which feel out of step with both the characters and the events to push the film towards being as straightforward as possible. Knightley does a decent job – and Fiennes is extremely good as the Duke – but it settles for being something safe and traditional rather than a really interesting look at the cultural moods of the time, or the complexities of the real people it claims to portray. It shares it’s subjects beauty, but reduces her to blandness.
Email ThisBlogThis!Share to TwitterShare to FacebookShare to Pinterest
Labels: 2013, Biography, British Films, Charlotte Rampling, Costume drama, Dominic Cooper, Hayley Atwell, Keira Knightley, Ralph Fiennes, Saul Dibb