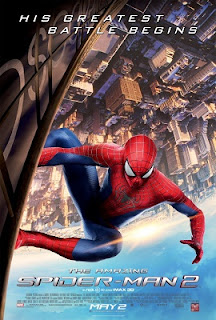 The Amazing Spider-Man 2 was set to launch a Spider-Man franchise that “would last a THOUSAND YEARS!!!”. It didn’t. In fact this bloated, poorly constructed, overlong mess killed those plans stone dead. It says a lot that a film which took $709 million worldwide is considered a flop. But the reaction to the film was so meh that there was no desire to see any further films about this Spider-Man. On every count the film is a catastrophic failure.

Peter Parker (Andrew Garfield) is enjoying the life of a super-hero, while struggling to maintain his relationship with Gwen Stacy (Emma Stone) due to his guilt over her father’s death. That sentence, by the way, demonstrates how schizophrenic this film’s tone is: a hero who loves life and simultaneously is plagued with guilt? He’s also obsessed by finding out what happened to his parents (killed off in a superfluous pre-credits flashback, setting up a mystery the film loses all interest in). At the same time, he must take on obsessive loner fan Max turned supervillain Electro (Jamie Foxx), and old friend Harry Osborn turned supervillain Green Goblin (Dane DeHaan).

After a so-so remake of Sam Raimi’s first Spider-Man, Sony seemingly decided to skip Spider-Man 2 and jump straight to a remake of the reviled Spider-Man 3. Many of that film’s disastrous mistakes are made again: romantic tension that never feels real, action sequences that feel like trailers and, worst of all, stuffing the film to the gills with villains (at least four characters can lay claim to being major primary or secondary antagonists). It also makes its own mistakes, chucking in endless references to a dull, confusing ‘mystery’ around Peter’s parents (that will never now be resolved).

On top of all that, there is something so nakedly grasping about Amazing Spider-Man 2 it’s almost impossible to love. It’s such a greedy film that almost every conversation and stray camera shot tries to set-up potential future movies (the low point being a camera pan down a room full of devices that will become the weapons of future baddies). The plot gets constantly drifts down side alleys as it frantically tries to establish enough plots for the studio to keep churning out films over the next five years. This also means it goes on forever without any real sense of impetus developing in the story.  The action is so nakedly shot with an eye on the trailer, that nearly each fight is literally shot with a crowd of people watching behind barriers, cheering events on.

Whatever happened to the trick of making a successful franchise being to make a good movie? Imagine a film focused on a single villain plotline, and played that off against a relationship drama (something like, say, Spider-Man 2). That might have been something worth seeing, that might have made you think “well I enjoyed that, I wouldn’t mind seeing another one”. But this film is little more than an extended trailer for films to come – it’s as soulless and empty as a piece of marketing puff.

Any ‘emotional’ moments are placed so blatantly as filler between the action that they carry no resonance. Does anyone give a toss if Gwen Stacy goes to London or not? Was anyone actually moved at all when she (spoiler!) dies at the end? For all of Spider-Man 3’s faults, at least when Harry Osborn went bad it resonated, as audiences had seen his and Peter’s relationship play out over two films. Here Harry is introduced, the next scene he and Peter openly say they are best friends, then they barely spend any further time together before Harry’s “shocking” volte-face. If the film can’t be bothered to spend any time earning it, why should I spend any time investing in it?

Andrew Garfield’s Peter Parker has his fans, but I’ve found him (in both films) an insufferable, cocky prick. Garfield is a very good actor, but his direction to play Parker as a young buck completely fails. His wisecracking persona works as Spider-Man, but falls flat as Peter, who never seems particularly sweet, relatable or endearing in a way Tobey Maguire managed so well. The parental plotline doesn’t help here either: having spent the first film not really giving a toss about the death of Uncle Ben, here he outright obsesses over his parents in a way that just doesn’t ring true, particularly as it carries with it an implicit rejection of Aunt May. His borderline controlling/stalkerish behaviour with Gwen Stacy is also pretty hard to stomach (he spends half the film telling her what to do, the other half either following her or openly stating he will never let her go – okay weirdo…)

It’s quite damning that despite all this, Garfield (and to be fair, Emma Stone) is the best thing in this lifeless pile of stodge. Jamie Foxx is so hilariously miscast as Electro it skewers the whole movie (surely part of the reason why he is in it so little). Foxx can’t resist showing the audience all the time that he (the actor) is far smarter, cooler and popular than the character – his contempt for the role drips off the screen. DeHaan overacts wildly as Harry, bested only by Giamatti’s cartoonish overblown shouting. Field cashes her cheque with professionalism as Aunt May.

People aren’t stupid. They can tell when they are being ripped off. And they can tell when a studio flings bangs and bucks at the screen with no heart and soul behind them, when a film’s been made by people who want to fleece fanboys, rather than create something that speaks to their love of the material. It’s the problem with both of these Garfield Spider-Man films (and to a certain extent Raimi’s last one). They are soulless, dead films made by committees. They listen to all the worst cries of the fans and then try to give them everything at once. They end up giving them nothing. Which is what this film is: a big, empty pile of nothing.
Email ThisBlogThis!Share to TwitterShare to FacebookShare to Pinterest
Labels: 2014, Andrew Garfield, Box office bombs, Comic books, Dane DeHann, Emma Stone, Felicity Jones, Franchise Killers, Jamie Foxx, Marc Webb, Paul Giamatti, Sally Field, Spider-Man