Sullivan: I’m going out on the road to find out what it’s like to be poor and needy, and then I’m going to make a picture about it.
Burrows [his butler]: If you’ll permit me to say so sir, the subject is not an interesting one. The poor know all about poverty and only the morbid rich would find the topic glamourous. 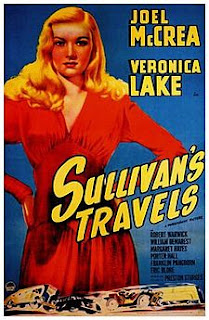 Preston Sturges was one of Hollywood’s first writer-directors, a whip-sharp satirist. In Sullivan’s Travels he turned his guns firmly on Hollywood, satirising the industries self-importance. However, what he did so well was to counterbalance this with a genuinely insightful look at the urban poor and a celebration of the magic of the movies. The fact that he managed to cover this all in one movie – without making the film feel wildly inconsistent in tone – is quite some accomplishment.

John L. Sullivan (Joel McCrea) is a Hollywood director tired of making shallow crowd-pleasers. He wants to make a serious, social-issue film (called O Brother Where Art Thou?). When studio heads point out he knows nothing about the working man, Sullivan declares he will head to live the life of a drifter until he understands them. After several false starts, it isn’t until he meets a girl (Veronica Lake) that he starts to truly experience the life of the poor.

I’ve mentioned Sullivan’s Travels shifts in tone. In many ways, it’s a film that wants to have its cake and eat it – to be a satire of self-important move-making, and at the same time be an important movie. The extent to which it succeeds is a matter of taste: I can imagine plenty of people being thrown by the sudden shift in tone that kicks in for the final 40 minutes, after the slapstick and screwball comedy of the opening hour. But that’s partly the point. Sullivan’s Travels works because it puts all the objections you could make to a film “teaching” real people about their lives in that first hour – so you feel disarmed heading into the final half hour when the film does just this.

So that first hour first: it’s very funny. The scattergun satire of Hollywood folks is brilliantly done. The fast-paced dialogue of Sullivan and his studio bosses discussing his plans is wonderfully funny – how could you not like an exchange like this:

Sullivan: I want this picture to be a commentary on modern conditions. Stark realism. The problems that confront the average man!
Studio head #1: But with a little sex in it,
Sullivan: A little but I don’t want to stress it.

What’s sparkling about the exchanges is that Sullivan is just as out-of-touch and elitist as the suits, but with a higher degree of self-delusion. His attempts to head off onto the open road and live the life of the drifter are hilariously inept – his first sees him travelling with a “support team” (including a doctor, chef and media man); the second sees him accidentally return back to Hollywood. Sullivan wants to make a film about real people, but Sturges stresses he is as clueless and confused about the subject as any other rich Hollywood snob. The film has a glorious mixture of verbal acrobatics and slapstick pratfalls to demonstrate the comedy of this extraordinarily rich man (who at one point off-handedly runs through the features of his vast home) trying to relate at a distance to the poor.

It takes his meeting with Veronica Lake’s unnamed Girl for him to begin to understand the drifter’s life. Lake’s character remains unnamed, which is another joke on Hollywood – earlier Sullivan discusses women in films with the phrase “There’s always a girl in the picture”, so the plot shoe-horning a Girl in (without even naming her) as a sort of beggar Viola is, in itself, a neat parody of the structural conventions of Hollywood films. Anyway, it’s the introduction of this character that serves as Sullivan’s gateway into seeing what the world is like. Disguised as a boy (which allows plenty of neat gags in itself) the Girl takes Sullivan on a tour of shanty-towns and soup kitchens.

It’s here the tone of the film slowly shifts towards seriousness as we finally get to see the lives of paupers, in a film satirising a Hollywood director who wants to make a film about that subject. It’s wonderfully meta! Sturges shoots these scenes with tenderness and simplicity, without dialogue and scored only by gentle music. There are some small laughs on the way – but we never laugh at the poor and the overall impression is of the quiet dignity of these people just struggling to get by. It couldn’t seem further away from Sullivan’s privileged expectations. It’s quiet and it’s dignified.

Sullivan ends the film (for various reasons) as part of a chain-gang, and finally true suffering and gains the strength of character to acknowledge his own vanity. In one of the film’s most magical sequences, Sullivan watches a film with his fellow convicts and a poor black congregation. Unlike a sequence earlier where he watched a film with the urban middle class (hilariously then every possible breach of cinema etiquette is made, from crunching loud food to babies wailing) this audience are transported by the magic of a Walt Disney cartoon.

This sequence is justly famous, not only for its innocent charm, but also its ahead-of-its-time treatment of the black congregation. The congregation is open-hearted, intelligent and generous. There is a marvellous (and moving) rendition of Go Down Moses and the black working class is contrasted with the dehumanising conditions of the chain gang. The whole sequence points out the underlying social injustice of America during this era. It’s wonderful – so well done you forget the film (in its jauntier first half) had a crude “white face” gag with its forelock-tugging black chef.


That’s the kind of film this is – a real mixture of genres, of views, of satire on social commentary mixed with real social commentary… Sturges throws almost everything at the wall here, and nearly all of it sticks. The underlying theme, if there is one, is the nature of class and privilege in America. Sullivan is well-off, from a rich background. He finds himself on a chain-gang when he is mistaken for the bums he is attempting to find out more about – but when he is revealed as a rich film director he is immediately released, despite still being guilty of the offence he was arrested for in the first place. In America, money talks and everyone else walks.

Sullivan’s Travels is probably not going to be everyone’s taste. Watching it, I missed the comedy of the first half during the more serious second half, cleverly done as the build of expectations was (how can you criticise the film, when the film is already criticising itself successfully?). Sure parts of it are dated, but it contains so many different types of film-making (screwball wit, Chaplin-esque pratfalls, animation, social realism, melodrama, romantic comedy) it’s almost a film school essay. It also manages to make its changes of tone throughout feel like natural developments.

All this and I’ve hardly mentioned the performances. The cast is full of brilliant character players, all of whom get their moments to shine – Sturges cast from a pool of regular actors, and he was a superb judge of distinctive faces and unique vocal delivery. Veronica Lake is very good – endearing but also sharp and smart as the Girl – but the film is totally anchored by Joel McCrea’s superb, low-key, straight-forward performance which resists all temptations to wink at the camera.

Sullivan’s Travels feels like a little known masterpiece – but it deserves being known better. It’s original, it’s funny, it’s moving, it’s clever and it’s packed full of great moments. It’s a wonderful example of old-school Hollywood looking harshly at itself – not only at its shallowness and formulaic nature, but also at its self-importance and self-satisfaction – but still acknowledging that the escapist pleasure it can give to people is valuable, that it can be a force for good, for all its faults. It tries to have its cake and eat it – but do you know what? It’s probably one of the very few films that pulls that off.
Email ThisBlogThis!Share to TwitterShare to FacebookShare to Pinterest
Labels: 1941, Hollywood satire, Joel McCrea, Porter Hall, Preston Sturges, Robert Warwick, Screwball comedy, Veronica Lake, William Demarest