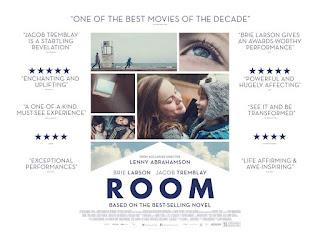 Several years ago, I read a book on the train while coming back from Manchester. I wasn’t even sure why I had bought it: the cover made the story look fluffy and empty and (horror of horrors) it was narrated by a child. Surely a recipe for a tiresome read. I couldn’t be more wrong: I couldn’t put it down. Room was sensitive, it was heartbreaking, it was life-affirming, it was fantastic. If that’s not a tricky act to follow, I don’t know what is.

Room tells the story of Ma (Brie Larson) and her son Jack (Jacob Tremblay), who live together in a small room, with one skylight and no contact with the outside. Ma has built a whole world of childish adventure and excitement for Jack in this room, and their days are filled with games and laughter. But the audience knows better: at night Jack sleeps in the cupboard, ordered never to come out as Old Nick (Sean Bridgers) comes into the room and sleeps with Ma. Ma (or Joy) is a woman in her early twenties, kidnapped and trapped in this room for seven years.

Room is an extraordinary piece of film-making, which really captures the compelling richness of a fantastic novel. However, one thing I think is very interesting about this film is the varied reactions it receives from people. I watched this film with my wife, and we had quite different reactions to it: she found it bleak (despite having a positive ending), while I found it (like the book) a hopeful and positive film, a life-affirming story about the conquest of innocence over adversity.

Abrahamson has perfectly captured the tone and style of what was already a hypnotic and engaging book. In the book, the entire story is interpreted through the eyes of the child. The reader knows the situation is far more dangerous and sinister, but we see the confined world of the room from the viewpoint of a child who literally knows nothing else. The book requires the reader to tell themselves the “full story” between the lines of the child’s perceptions.

In the film this is much harder to create – we can see everything for ourselves. What Abrahamson and Donoghue (who adapted the script from her own novel) do so well is keeping the child at the centre, and filtering much the film through him – we don’t see or experience anything Jack doesn’t. This means that Abrahamson is able to bring some of the love Jack feels for the room around him into the story – an opening montage of their daily routine, including eating, play and exercise, shows that to a kid, this could be seen as a fun place to live.

It’s also, for Jack, an extraordinarily safe place: he knows every inch of his universe, and never encounters anything that he does not know or has not seen before. The struggle for Jack is not to escape the room, but to grow up – to accept the existence of a wider world around him and leave childhood security behind. It’s a theme in that helps make the film universal, despite its extraordinary circumstances, as a heartfelt coming-of-age story. Abrahamson’s skilful and brilliantly subtle direction threads this concept through the entire story, undercutting its potential bleakness and providing it with warmth and depth.

The fact that this was (for me anyway!) an uplifting film demonstrates with what grace it has been put together. The alternative story that runs underneath Jack’s full understanding is handled with sensitivity but unflinching honesty. Joy may go out of her way to protect Jack from what is really happening to her – imprisoned and routinely raped several times a week – but the viewer understands far more. When Jack says there are days when “Ma just needs to sleep all day” we know the causes of her feeling – and the quiet shot of Joy silent and still under a duvet speaks volumes of the mental strain she is under.

So why is this uplifting? Because for me, this story is about Joy’s struggle to keep her son innocent, to keep him safe and to protect him from the reality of what is going on around him. To make sure that his father never has a piece of him. In this she is completely successful: in fact, her focus is so overwhelmingly on protecting Jack that later in the film, when events remove the need for this, she herself undergoes a terrible mental collapse. But the message throughout is Joy’s overwhelming love for her son and her desire to protect him: and this makes her story, in a strange way, a triumph.

Joy’s story also seems (eventually) positive, due to the power of Brie Larson’s performance. Winner of a well-deserved Oscar, Larson is unflinching in her empathy for Joy’s situation, her dedication to the role apparent in every frame. She never allows Joy to become weak – she may be trapped, she may suffer from depression, but she has an inner strength that has developed from her fixation on the welfare of her son. She is uncompromising though in playing the reality of the emotional burden Joy is carrying both for herself and her son.

Larson also deserves much credit – as does Abrahamson’s direction – for the simply breathtaking work from Jacob Tremblay as Jack. It’s no exaggeration to say that without a child capable of delivering a performance like this, the film could not have existed. Tremblay’s performance is completely natural, totally unforced and deeply affecting. We totally invest in his fate. He has the pressure of carrying huge chunks of the film and does so with complete confidence. He and Larson have a totally natural chemistry between them, a bond that seems unshakeable.

This is a film I found profoundly moving – there are several moments (at least three) where I felt a lump in my throat and tears in my eyes: moments of sadness, but also moments of triumph and moments of simple human warmth. It’s a spoiler to even say that there are other people in this film, but the second half of the film widens the story and subtly changes its nature: it is a survival story from the start, but it’s also one of adjustment and recovery. This later act of the film is as wonderfully told as the first part, rich with empathy and human emotion.

Room is a truly wonderful film, a small scale story about huge and powerful themes that wears its greatness very lightly. Lenny Abrahamson’s direction – both technically and in its control of actors and story – is exceptional, creating a film that balances dozens of tones with aplomb. Like I said, it’s a film that invites you to take many readings from it: it’s a film about a victim, that feels like a triumph story; a film about a confined world that teaches us about the wider world; a film about imprisonment that feels like a celebration of freedom. It’s an extraordinary work, and there isn’t enough praise for Larson and Tremblay. I can’t imagine not being moved again the next time I see this – it’s a film for the ages.
Email ThisBlogThis!Share to TwitterShare to FacebookShare to Pinterest
Labels: 2015, Brie Larson, Joan Allen, Lenny Abrahamson, Literary adaptations, William H. Macy