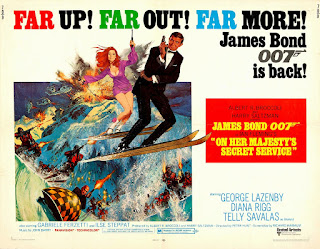 After You Only Live Twice, Sean Connery was through with Bond. Despite the producer’s pleas, Connery was off. The producers were hit with a conundrum – should they recast and start again? Or recast and pretend nothing has changed? They went with the second option and spread the net among the world’s actors, and hired… a man whose only screen work was in a chocolate advert.

Bond (George Lazenby) is on the hunt for villainous SPECTRE head Blofield (also played by a new actor, Telly Savalas). Following a lead, he meets and begins to fall in love with daughter of a Count, Tracy di Vicenzo (Diana Rigg), before infiltrating Blofield’s alpine HQ disguised as an expert in heraldry (seriously that is the plot). There he uncovers a plot for world domination that involves a dozen attractive young women, a deadly virus and the usual collection of inept SPECTRE henchmen.

It’s become a bit retro-cool to reassess OHMSS as the finest James Bond film. This always seemed odd to me: this series, more than any other, is so closely tied in with the personality and skills of the lead actor – and this film has the weakest of the lot. But compared to the two slightly tired films that came before it (YOLT and Thunderball), this one does have more narrative ambition and offers a freshness and sweep in its filming, as well as a compellingly filmed series of action pieces.

Really though you can’t talk about OHMSS without mentioning the Lazenby-sized elephant in the room. Poor George. Watching Lazenby you can never forget this is a guy who landed Bond on the basis of (a) he looked good in a tuxedo and (b) he broke a stuntman’s nose when he auditioned.  But let’s start with the positives. Well he can fight – jeez louise this guy can fight. Lazenby’s Bond is possibly the most physically aggressive until Craig. He’s totally at his ease in the fast-paced fisticuffs that fill the movie. He looks very believable when he’s asked to do anything athletic or dangerous looking. I’ll also cut him some slack that he is given a terrible wardrobe of clothes here (could he look more camp?) and that he spends a significant chunk of the film disguised as a camp heraldry expert.

It’s just a shame that anything involving acting is a bit too much of a stretch for him. His delivery of his dialogue is flat and lifeless. For a large chunk of the film, his voice is all too obviously dubbed (by George Baker). He’s frankly not that funny, despite having several gags (including of course “This never happened to the other fellow”) which are actually pretty good. He can’t bring any real emotional depth to the romance. His chemistry with Diana Rigg is pretty middling, although he does a decent job of his grief at her (spoilers!) death. But it’s the voice that you keep coming back to. It’s grating – flat, dull and monotone. Even though the material makes Bond more human than ever, Lazenby’s underwhelming performance doesn't make us feel any closer to him.

The producers were clearly aware of the problem, so crammed the film with as many references back as they could manage, as if to reassure audiences “Yes Connery has gone, but don’t worry it’s still Bond!”. So we get a scene of Bond flicking through a desk full of knick-knacks from previous films (the film even plays snatches of the scores). M, Q and Moneypenny work overtime to treat Bond exactly the same. All this attention to continuity of course only goes so far – despite the fact they both spent a fair bit of time with each other in the previous film, Blofeld doesn’t even remotely recognise Bond when he rocks up at Blofeld’s base pretending to someone else, disguised by nothing but a pair of glasses. For a film determined to hammer home the continuity more than any other in the series (until Spectre) this doesn’t make a lot of sense.

So the real question: can you have a great Bond film, when Bond himself in it is pretty dreadful? Can you really enjoy the film when the whole time you almost force yourself to picture any of the other Bonds in place of the one you’re actually watching? Well OHMSS gets pretty close to success despite the fact it has a black hole at its centre, which is a tribute to it. This one feels closer to Ian Fleming than almost any other film in the series. It’s the straightest adaptation of the source since From Russia With Love. Lazenby’s more human take on the role (sentimental, scared at times) does feels closer to Fleming’s Bond than Connery’s Ubermensch. This doesn’t mean the plot isn’t utter bobbins – but at least it’s very Fleming-esque bobbins.

In fact the producers threw everything except the kitchen sink at this one. There’s a car chase (in the middle of a car rally), a helicopter-led storming of a SPECTRE base, no end of punch-ups, a barrage of battles, ski-chases down the alps, a final battle in a toboggan (surely the only film until Cool Runnings to build up to a climatic encounter in a winter-sports event). Many of these sequences are terrific, and Hunt films everything with a grounded realism (despite the ludicrousness of so much that happens) that makes everything immediate and exciting. He also combines this with an ability to shoot moments of epic action with sweep and majesty.

It’s also quite refreshing in how it treats its romantic lead. Diana Rigg is not only (by far and away) the best actress to play a Bond girl until the Craig years, but she is allowed to create a character who feels a worthy partner to Bond. Tracy is brave, determined, can take care of herself, rescues Bond at one point and gets to do all the driving (and is extremely good at it). Sure the film has its old-fashioned moments (when her father encourages Bond to court her, he charmingly states: “What she needs is a man... to dominate her! To make love to her enough to make her love him! A man like you!”. Okay…), but as far as it goes this is pretty advanced stuff for Bond at the time.

The plot is nonsense of course, and Telly Savalas feels like a strange choice for Blofeld (he’s far too gritty, aggressive and, above all, American!) but the action is really well counterpointed with the relationship between Bond and Tracy. Tragically, this film has exactly the rich, deep and emotional material Connery was crying out for. The love story – despite Lazenby’s limitations – feels genuine and sweet and the final tragic ending is, by far and away, the best bit of acting Lazenby gives in the entire film. But you keep imagining what it would have been like if Connery had been in this film, or indeed anyone who could actually act (even Moore could have made a lot more of this material).

That’s the problem with OHMSS. Bond films depend on their Bond – and when the Bond lacks any real charisma and struggles to deliver on anything other than the physical side of the business, your film is always going to be in trouble. Which is a real shame, because nearly everything else about this film is actually really good. It feels fresh, exciting and real in a way others felt tired and over familiar. It’s got some excellent action and excitement. It’s shot and edited with real vibrancy. The action set pieces are exciting. It’s got a sweet romance at its centre. You just don’t really connect with or care about the hero. And for a film series that rests so heavily on the lead, that is pretty terminal.
Email ThisBlogThis!Share to TwitterShare to FacebookShare to Pinterest
Labels: 1969, Bernard Lee, Diana Rigg, George Baker, James Bond, Peter R Hunt, Spy thrillers, Telly Savalas