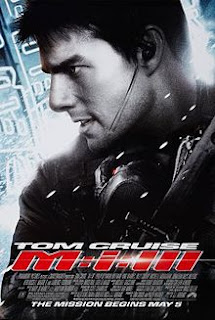 If there is one thing Tom Cruise does better than anyone in the movies, its run. Man, can that guy run well on camera. It’s not as easy as you’d think – watch people run in real life, and they probably look galumphing and awkward. But Tom looks as sleek as a gazelle. Every stride stresses his authority and unflappable coolness. I mention it because Tom does a lot of running in this film. The dénouement is basically him running over a mile and half, nearly in real time, a lot of it one long shot.

JJ Abrams came to Mission: Impossible off the back of his successful TV series, Alias, in which Jennifer Garner’s undercover agent takes on a variety of disguises, working in a team, on a series of missions to get impossible-to-obtain artefacts against terrific odds. JJ Abrams carries the formula that worked so well in that series straight into this one.

The whole film plays out like an Alias movie. It even uses that series regular gambit of an opening scene throwing us dramatically into the story before flashing back “72 hours earlier”. Just like Alias, we have our lead trying to make a relationship work without saying what they do for a living, a family feeling in the team’s relationship, a geeky tech guy with a heart of gold, double and triple agents, glamourous locations – it’s everything an Alias fan could want, with Cruise’s Ethan Hunt essentially Sydney Bristow in all but name. This also brings out the best in Cruise, who looks like a man born again in the role.

Mission: Impossible: III is truly delightful, big-screen fun, rebirthing the series and placing team interplay firmly back at the centre, setting the tone and template the next two films have followed. Ethan Hunt (Tom Cruise) is in semi-retirement, training agents and planning to marry Julia (Michelle Monaghan). However when his young protégée Lindsay Faris (Keri Russell) is captured while investigating sinister arms dealer Owen Davian (Philip Seymour Hoffman), Hunt sets out to rescue her – and finds himself up to his neck in shady and dangerous goings-on.

Every action scene in the film is brilliantly entertaining (the mid-film drone assault is wind-it-back-and-watch-again exciting.). Of course, Cruise takes more than his fair share of the juicy moments – including a crazy jump off the roof of a Hong Kong building that has to be seen to be believed – but Abrams makes this a team movie in the way neither of the two previous films had been. Each member brings crucial skills to the table, and has moments to shine. Pegg takes the stand-out role of a witty, nerdy tech back at the base (sure enough his role was expanded later), but each feels an essential part of the story.

It also helps that the film has a terrific baddie to bounce off – the series has not had a better villain than Hoffman’s ice cold arms dealer. Sure Davian is pretty much a part Hoffman could play standing on his head – but he’s got just the right balance of rage and ruthless intellect.

If you want to see a single example of why this film works, take a look at that opening scene. Who could resist a film that opens with a scene as masterfully directed as this, sizzling with tension and ending with a smash cut to black over a gun shot and into the opening score? Hoffman and Cruise are excellent (Hoffman’s ice-cold control providing a great contrast to Cruise, who runs the gamut of defiant, furious, faux-reasonable, desperate and pleading), but it sets out the huge stakes for the film, it keeps us nervily waiting for the film to catch-up with what we’ve seen, and it tells us how vitally important what Davian wants is to him – and how desperate Hunt is to protect Julia.

Abrams has a perfect understanding of dramatic construction.  Everything in the film is carefully established and set-up, so we always understand the dangers and the threats. MI3 also uses its macguffin extremely well. What do we learn about “the Rabbit’s Foot”, the possession of which is of such vital importance? It’s small enough to fit in a suitcase, it’s stored in a round glass tube, it’s got a biohazard label and it’s worth millions. That’s it, but it doesn’t matter: Abrams establishes the most important thing – it’s dangerous and Davian wants it more than anything. Everything spins out from that with smooth efficiency.

The pace never lets up, but the characters and their relationships are never left behind. In particular Monaghan and Cruise’s relationship is skilfully established in surprisingly few scenes, and something we end up really rooting for. Abrams never goes overboard – the film is stuffed with action and excitement but never feels bloated or indulgent: the final confrontation is particularly effective because it is fairly small scale and is focused on the Hunts’ relationship.

Mission: Impossible 3 is one of the most joyful entries in a film franchise that deserves a lot of kudos for (by and large) focusing on plot, story and character alongside action sequences that have a feeling of tangible reality about them. It’s not completely perfect – a shock reveal about a turncoat in the IMF is hardly a surprise, considering the small number of candidates and the actors playing them – but it’s about as close as you can get to an endless enjoyable fairground ride.
Email ThisBlogThis!Share to TwitterShare to FacebookShare to Pinterest
Labels: 2006, Action Films, Billy Crudup, Eddie Marsan, JJ Abrams, Jonathan Rhys Meyers, Keri Russell, Laurence Fishburne, Michelle Monaghan, Mission Impossible, Philip Seymour Hoffman, Simon Pegg, Tom Cruise, Ving Rhames