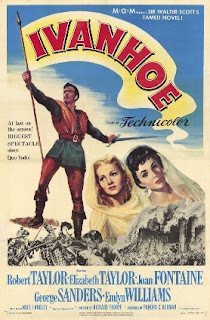 Adapted (very loosely) from Sir Walter Scott’s novel, Ivanhoe was another instalment in Hollywood’s battle to drag people away from their new-fangled TV sets. This rivalry meant technicolour spectacles like this were the most valued animals in a studio’s stable, which probably explains why Ivanhoe was the MGM film nominated for Best Picture in 1952, while The Bad and the Beautiful (which set a record for most Oscar wins for a film not nominated for Best Picture) and, almost unbelievably, Singin’ In the Rain were overlooked.

Noble knight Ivanhoe (Robert Taylor) finds Richard the Lionheart (Norman Wooland) locked up in Austria. Returning to England, he looks to raise funds to rescue the King – mostly by putting the gentle squeeze on Jewish banker Isaac of York (Felix Aylmer) while flirting with his daughter Rebecca (Elizabeth Taylor). He must also reconcile with his father (Finlay Currie) and his sweetheart Rowena (Joan Fontaine), and prevent wicked Prince John (Guy Rolfe) and his sidekick Sir Brian (George Sanders) from taking control of the Kingdom.

Bless, this film looks quite dated now. The bright primary colours of the costumes are endearingly sweet, with our heroes dressed in capes and tights with all the delight of primary school children in a play. You need to tune into its simplicity – failing to do so means you’ll struggle to watch the final battle scenes as characters go toe-to-toe with all-too-obviously bouncy rubber swords (at one point, a sword literally bends and snaps back into place after a strong blow). The film is crammed with fights, jousts, sieges and battles – there is precious little room for plot, dialogue or character, but at least you get a maelstrom of action (even if it rarely makes much sense).

At the centre of it all is Robert Taylor as Ivanhoe. As in his other roles, Taylor is as stiff and lifeless as a board, while his transatlantic vowels clang with even more painful obviousness amongst the cut-glass and ‘ever-so-’umble’ accents from the cast of jobbing British actors. Taylor squares his jaw and does his best with the derring-do – although, as per usual, he makes Ivanhoe such a dull person, you can hardly raise the slightest interest in him. Inexplicably every woman in the film (i.e. both of them) are head-over-heels in love with him.

But then all the heroes in this film are stick-in-the-muds. Harold Warrender is the most arrogant, least fun Robin Hood you’ll ever see. Finlay Currie gives swagger as Ivanhoe’s father, but is basically a pompous windbag. Emlyn Williams as comic relief “Wampa” is so tiresome you’ll breathe a sigh of relief when he burns to death in a fire. Joan Fontaine is so saintly opposite the balsawood Taylor that you find it unlikely that we will ever hear the pitter-patter of little Ivanhoes.

The bright spots are the villains. Guy Rolfe has huge fun as a moustachio-twirling, scheming Prince John. George Sanders gets the most out of Ivanhoe’s rival Sir Brian (can you think of any other film with a villain called Brian?), although the part (and the film) is far beneath him.

Brian is of course infatuated with the Jewish Rebecca (played with a radiant charisma by a very young Elizabeth Taylor). If the film has any claim to being a more than just a gaudy knight’s tale, it’s in its treatment of its Jewish characters and careful exploration of anti-Semitism in medieval England. Taylor and Felix Aylmer (as her father) give sensitive performances as put-upon, civilised people, ill-used by those around them and expected to lend support at the drop of a hat. Ivanhoe’s assumptions that they (a) have tonnes of money and (b) will feel duty-bound to help Richard are met with a quiet regret and a pointed comment that Richard’s own anti-Semitism track-record is hardly that good. Later Rebecca is placed on trial, her Jewishness central to accusations of sorcery. Persecution is an underlying theme of the film – and although it ends with all right as rain, the threat of it throughout much of the action makes the film feel more substantial than it is.

The main problem is it’s not made with any inspiration. Thorpe is a mediocre director, and the editing flashes through some parts of the story almost too fast to follow what’s happening. The ending suffers in particular from this economy: suddenly we cut from Brian and Ivanhoe fighting to the death, to Richard arriving with an army of knights, Brian being killed largely off-camera, a quick dying speech from him, then Richard announcing everything is fine in the kingdom. It’s all so sudden, it feels like they just ran out of film so needed to wrap it up quickly.

Still, Ivanhoe is fairly good fun despite all of this. It doesn’t require any concentration – and is hardly a minor-classic, let alone any other form of classic – and it has some truly hit-and-miss performing, but it barrels along ago. It may be workmanlike in the extreme, but its bright primary colours mean there’s always something to look at.
Email ThisBlogThis!Share to TwitterShare to FacebookShare to Pinterest
Labels: 1952, Basil Sydney, Elizabeth Taylor, Emlyn Williams, Felix Aylmer, Finlay Currie, George Sanders, Guy Rolfe, Historical epics, Joan Fontaine, Robert Taylor