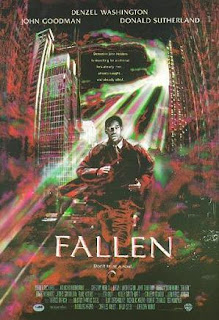 Every so often, a film comes round that you know, while you watch it, is a fairly average, unspectacular piece of film-making. But for some reason something about the film just clicks with you and you end up enjoying something basically nothing special. For me, Fallen is one of those films.

What’s particularly nice about having this film as a bit of a guilty pleasure is, I’m pretty sure, most people have never heard of it. Detective John Hobbes (Denzel Washington) has recently been present at the execution of a notorious serial killer. Moments before his death, the killer grabs his hand and mutters a message in a strange language. As a copycat killer continues the crimes – and begins to frame Hobbes – the detective slowly realises his nemesis is no man, but a demon, able to possess humans by touch. He failed to possess Hobbes – and now wants to destroy his life.

There is nothing really new here: Hobbes is straight out of film noir, while the plotline of his mentally handicapped brother raising a son is pure TV-movie of the week. The demon possession idea is not exactly new (although it’s snazzily shot) and the demon quickly heads the way of most creatures in these films: foul-mouthed and delighting in sex and violence. There is a secret underground movement of those aware of the demons on Earth (fortunately we only see one of them) combatting their evil. Nothing really new.

But Fallen makes these elements seem somewhat fresh. The idea of the demon moving from person-to-person via touch is very interestingly presented. At one point Hobbes has a conversation with the demon, as it switches from host to host. Later Gretta (Embeth Davidtz) is pursued down the street by the demon, moving swiftly from person to person in a chain of touching hands. The various actors do a good job of conveying a single consistent character for the demon (fortunately he favours possessing recognisable character actors from US TV drama). Hoblit’s direction has plenty of these interesting new ways of presenting things. He’s also able to keep a good air of menace throughout the film.

It’s not perfect of course. The investigation of the demon’s background hits all the familiar beats from Dante to the Bible. Hobbes must be the only person in the world who (having decoded a message) has to ask A NUN whether the word “Apocalypse” means anything to her. A detective who has never heard of the word apocalypse? Times have changed: it’s the sub-title to an average X-Men film now. At least one character is so obviously set-up as a candidate for long-term possession, you immediately suspect he’s innocent.

But the film has a fine closing scene, and a decent twist which plays with your initial expectations. It also gives you plenty of clues throughout (from the first shot of the film) about how the action might play out, more than enough for you to work it out for yourself. The idea of the “final confrontation in the wilderness” is again a familiar one, but the supernatural element makes this feel different. It’s actually a twist I didn’t see coming first time around (I was young at the time, not sure if I would be caught again today) – but it’s well presented and doesn’t cheat the audience.

Probably the main reason the film works so well though is Denzel Washington. Here is an actor giving a performance probably beyond the material, encouraging others to lift their game. He perfectly captures both Hobbes’ dedication and his purity of soul, with plenty of little touches that never feel heavy handed. He makes the plotline with his brother hugely sweet. He gets the balance just right between scepticism and dawning horror. It’s a real professional performance that plays off his charisma very well – imagine how awful it would have been with Keanu Reeves in the lead.

But I love that twist ending, and I’m a sucker for these demonic possession films (like disaster films or period epics) so I’ve seen this 3-4 times and really enjoyed it each time. As well as Washington, John Goodman and Embeth Davidtz give very good performances, and there is always enough mystery that you never feel you are racing  far ahead of the film (of course we know from day one it’s about demonic possession, but the characters never feel dense catching up with us). Fallen is a high quality piece of B-movie thrills. If you haven’t heard of it, do check it out.
Email ThisBlogThis!Share to TwitterShare to FacebookShare to Pinterest
Labels: 1998, Denzel Washington, Donald Sutherland, Elias Koteas, Embeth Davidtz, Gregory Hoblit, James Gandolfini, John Goodman, Supernatural thriller, Thrillers