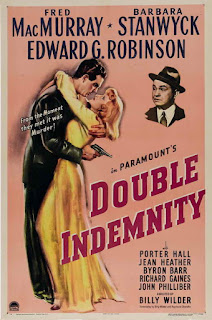 In the wake of the Second World War, morally complex and dark (in every sense of the word) stories spoke to a nation coming to terms with what it had been through. Out of this was born a new genre: film noir. Double Indemnity might just be the best example and one of Billy Wilder’s best films.

Walter Neff (Fred MacMurray) is a bored insurance salesman, smitten with the sexually alluring Phyllis Dietrichson (Barbara Stanwyck), wife of a potential client. When she suggests that, with his help, they could get rid of her husband and collect a massive insurance payout on his death, Neff is quickly won over. But murder is a hard thing to get away with – particularly when Neff’s colleague and close friend Barton Keyes (Edward G Robinson), the best investigator in the business, smells something amiss in the ‘accident’.

Phyllis is a woman who understands the power of sensuality, who is well aware of how she can use her body and aloof mystery to get what she wants out of men. But even more than that, Stanwyck’s wonderfully cold performance suggests she hardly seems to care about anything at all: in fact the impression is almost that she is locked into moving forward, passing through husbands and lovers, leaving men dead on the wayside. That’s the magic of Stanwyck in this film: can you remember a character as unremittingly, unapologetically sinful, manipulative and conscience-free as this?

Of course Fred MacMurray’s Walter Neff is the perfect rube for this fiercely intelligent and determined woman. MacMurray’s slight B-movie blandness – his lack of star quality, his everyday, folky unimaginativeness – is perfect for the overconfident, slightly smarmy, laziness of Neff. It’s never said outright, but you suspect that the attraction of the danger Phyllis offers is escape from his own dull life. Does he love Phyllis? I would say almost certainly not – but is he horny for her? You better believe it. It’s a man on the cusp of a mid-life crisis getting a chance to throw himself into a sex-driven affair.

What do these two think of each other? Both of them seem barely capable of trusting each other, using sex and flirting almost as a filler between bouts of mutual suspicion. Does she care for him even a little behind her use of him? And does he feel anything like a bond with her inbetween the bouts of sex? They stumble so quickly into the plan that it almost feels like they are going through the motions – she is so used to manipulation and murder, it’s all she knows; he is so bored with his life that the excitement of violence and murder with his sex seems impossible to resist.

And Wilder lets sex run through this whole film. From Phyllis’ long descent down her flight of stairs at her first entrance to the irresistible anklet, everything about Stanwyck in this film is about the power of her sex. The dialogue exchanges between Neff and Phyllis crackle with magnetism. Later, Wilder skilfully shoots a sex scene without showing a thing: we cut from the two of them kissing on a sofa, to their positions shifted, Phyllis fixing her dress and Neff reclining smoking.

It helps that the dialogue is scintillating. Each exchange is packed with crackling and quotable lines. You get a perfect marriage here between Wilder’s acerbic cynicism and dry wit, and Raymond Chandler’s arch, spiky, carefully constructed dialogue, with its gritty poetry. I mean just watch the exchange here – perfection.


And they write some knock-out speeches too – but then you would if you had an actor as brilliant as Edward G. Robinson to deliver them.


Neff’s voiceover uses the technique where it should be used – not to tell us information any well informed viewer can already work out for themselves, but to allow us insight into Neff himself and his situation, that complements and develops our appreciation of the picture (it’s also beautifully well delivered by MacMurray). I’d also add it’s the same conceit as Sunset Boulevard – its lead character narrates the film mortally wounded – and it works just as well here, stressing the disaster that hangs over every action by our anti-heroes.

Added to this, the film looks beautiful. The shadows have an all-consuming inky depth. Cinematographer John Seitz is not afraid of turning the lights down and down, and the darkness absorbs and consumes the whole picture. It allows striking lighting effects – the blinds that seem to be in every room allow slits of light through them that draw lines across the faces and bodies of the actors (as many viewers have commented, it also has the effect of making half the characters appear like they are behind bars). The darkness looms in from the corners of the frame, trapping the leads into the action – and into their own disastrous decisions.

Wilder’s skilful camera placement is what makes this film really work. He presents action constantly in challenging and different ways, never doing the expected. During the actual murder (committed while Phyllis drives), the camera never looks at Neff committing the crime, but closely follows the look of almost sensual satisfaction on Phyllis’ face: she never once looks at what is happening in the seat next to her, but her face makes us experience the killing in an even more disturbingly intimate way than watching it would be.

But what makes this film truly brilliant and unique is that its main relationship isn’t even the one you expect. Neff and Phyllis may have an electric physical relationship, but the real romance in the film is between Neff and his colleague Keyes. These two share a deeply close and personal bond. Theirs is a friendship that skirts around a platonic romance – made sharper of course as Keyes is the only man who stands a chance of working out what exactly is going on. There is a fine visual motif throughout of Neff lighting matches (with his thumb!) for Keyes – a gesture that feels both manly and intimate.

Keyes is played by a career-best Edward G. Robinson. Robinson blazes through the big speeches – but with a confident skill that never makes them feel like showboating moments. He gives Keyes an eccentric brilliance, mixed with a delicate humanism. To be that good at sniffing out wrongdoing and deceit from his fellow men, you can’t help feeling that he must have a pretty good idea about what human fallibility feels like. It’s this warm human understanding that Robinson does so brilliantly. It’s also what helps to make this relationship so moving. It’s hard not to share the obvious awkward discomfort MacMurray gives to Neff when he feels as if he is letting down his friend, and betraying the trust between them.

It’s this that makes Double Indemnity stand out. It’s a film that’s actually about the relationship between two men – part friendship, part father-and-son, part romantic – their love for each other, which happens to have an irresistible femme fatale thrown into the middle. It feels like a very unique and different approach – a touch of Wilder magic if you will – that makes the film stand out. It’s also what lies behind the link it has with audiences, the human interest that makes you come back again and again to this film about two ruthless killers.

This is a film in which everyone was at their best. MacMurray never did anything again to match it, Stanwyck seized the part with such commitment that she spawned countless imitators, Robinson is just magnificent. Wilder’s direction is perfect, the film looks ravishing, the script is to die for. Double Indemnity may not only be the most influential film noir ever. It might also be the best.
Email ThisBlogThis!Share to TwitterShare to FacebookShare to Pinterest
Labels: 1944, Barbara Stanwyck, Billy Wilder, Edward G. Robinson, Film noir, Fred MacMurray, Murder mystery, Porter Hall