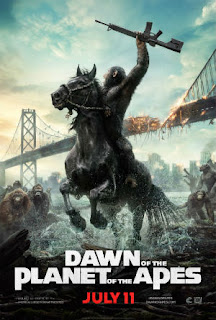 In 2011, Rise of the Planet of the Apes was another attempt to relaunch the money-spinning ape vs. human franchise. Unlike Tim Burton’s disastrous 2001 effort, it took a stance that felt truly unique. Sure, it still felt the need to reference back to the original film in places, but it was a terrific piece of story-telling. Anticipation was high for this sequel – and it met those expectations.

Ten years after the outbreak of a virus that has decimated the human race, the apes have built their own community in the forests near San Francisco, led by Caesar (Andy Serkis). A human party, led by Malcolm (Jason Clarke), enters the forest looking to restart a hydroelectric dam to supply power to the human’s San Francisco community. As the two communities collide, Caesar and Malcolm must work out a truce, despite the doubts of human leader Dreyfus (Gary Oldman) and Caesar’s lieutenant, former lab-chimp Koba (Toby Kebbell).

Dawn is an intelligent and visceral piece of film-making, which enrichens the first film in the series, as well as offering a surprisingly deep analysis of human (and ape) nature. Marry this  up with some quite astonishing special effects, and staggering work from the actors creating the apes through motion capture, and you have a hugely rich science fiction film that helps to cement this trilogy as the finest version of the Apes story so far. It’s also damn good fun.

Even more than the first film, Dawn places apes front-and-centre. The film is book-ended with close up shots of Caesar’s eyes, the determination and resolve in them springing from very different causes. The questioning of the nature of humanity revolves around Caesar – the leader balancing the urge to protect his own people against a willingness to support the needs of his people’s only potential threat. Caesar is the most humanitarian character– yet his determination to view other apes as does himself prevents him from seeing Koba’s treachery. It’s his own generosity that is his Achilles heel.

Andy Serkis, the Master of Motion Capture, has mastered this art like few other actors, but his performance as Caesar is his triumph. The degree of emotion he is able to communicate is astounding, while his physicality is extraordinary – it’s a perfect marriage of ape traits and human characteristics. It’s a triumph as well of special effects, but you quickly forget this and embrace the character you are watching. Serkis gives Caesar a deep hinterland of warmth and emotion, a desperation to protect what he has built, touched with a hint of blindness to the reactions his dismissal of Koba’s concerns will have on someone so damaged.

What’s interesting is that, although the film swings heavily in favour of the Apes, it’s the humans who become the victims of aggression, and the humans who are the most open (or desperate) to negotiation and co-operation. A simpler film would have turned Gary Oldman’s Dreyfus into a despotic counterpart to the traumatised Koba. Instead, Dreyfus proves surprisingly open to negotiation, demonstrates great affection for his followers, weeps ecstatically over finally being able to turn his tablet back on and look at photos of his family and only resorts to drastic measures after the human colony seems doomed.

The villain of the piece is Koba (remarkable work from Toby Kebbell). The film, though offering many indicators of Koba’s ruthless lack of regard for any life but his own, gives us reasons (even though these are sometimes stated directly for his feelings and the trauma that lie underneath them. The film doesn’t short change us on Koba’s obvious bravery in battle or his ability to inspire troops. Koba’s inability to adjust his thinking (unlike any other character in the film) leads to the violence. Just as Caesar’s urge to see all apes as meeting his own standards allows violence to grow around him, so Koba’s urge to judge all humans by the standards he has given them leads him to sacrifice countless ape lives in a bloody attack.

These themes of divided loyalty and the damage our own urges (for both good and evil) play out in a cracking storyline, packed to the rafters with action, shot with a confidence and skill by Matt Reeves. Despite being a film that always feels about larger themes, it wears this rather lightly, and offers more than enough popcorn thrills to please any Ape action fan. Koba’s assault on the human stronghold is both grippingly exciting, but also unbearably tense – the film embraces the grim sacrifice and slaughter of war. The final confrontation between Caesar and Koba is shot with a giddying, vertigo-inducing sharpness.

The ape effects are, it goes without saying, extraordinary. These are expressive, living, breathing characters – a brilliant meeting of some wonderful acting and brilliant special effects. Could you imagine a few years ago a film being anchored by a special effect ape played by motion capture? You quickly forget that they are not ‘real’ and accept them as genuine characters. Even more so than Rise, Caesar and the apes are front-of-centre and this is Caesar’s story. Serkis is of course a huge part of this – his influence and dedication to the motion capture and ape portrayal is superb.

Dawn of the Planet of the Apes is a terrific and thought provoking epic film, one that deepens, darkens and enriches the previous film and leaves an audience with not only a lot to consider but also highly thrilled. Unlike the previous film it doesn't shoe-horn in weak references to earlier films, but concentrates on telling a terrific and character-led story. It’s another terrific entry into a series that feels like it could become one of the great science fiction trilogies.
Email ThisBlogThis!Share to TwitterShare to FacebookShare to Pinterest
Labels: 2014, Andy Serkis, Apocalyptic dramas, Gary Oldman, Jason Clarke, Keri Russell, Kodi Smit-McPhee, Matt Reeves, Planet of the Apes, Science fiction, Toby Kebbell