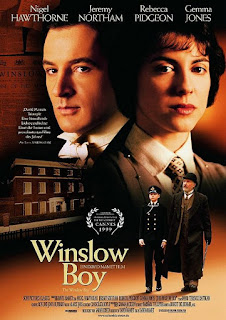 David Mamet surprised those who associate him with macho, alpha-male led drama with this sensitive and faithful adaptation of Terence Rattigan’s play. After his young son Ronnie is sent down from naval college for stealing a five shilling postal order, Arthur Winslow (Nigel Hawthorne, terrific) will stop at nothing to clear his name, supported by his suffragette daughter Catherine (Rebecca Pidgeon, excellent in a difficult role). They recruit Sir Robert Morton (an electric Jeremy Northam) to champion Ronnie’s case, as the scandal rocks the nation.

There can’t be many film adaptations of plays that so completely avoid “opening up” the play. The settings and dialogue of Rattigan’s original are kept largely as is. This means that – just as in the play – all the major dramatic events happen off-stage and are reported in dialogue. The campaign to clear Ronnie’s name? Apart from flyers and newspaper prints in Winslow’s home, you’re not seeing that. Morton’s advocacy of the case in the House of Commons? The smallest of scenes. The crowds outside the Winslow home? A faint echo on the soundtrack. The pivotal court case itself? Not a single shot. If ever a production made Rattigan feel more like Chekov, I’m yet to see it.

This theatricality is not necessarily a bad thing. I’ll admit it may create a film a bit too contained and low key for some. But catch this in the right mood and Mamet’s carefully considered staging brings many of its smaller moments and personal interactions into shape. Would a film full of triumphal courtroom scenes have so perfectly captured anti-climax and confusion that can come after an event that has dominated your whole life comes to an end?

This approach also allows the relationships to come front and centre – in particular the growing attraction between Catherine and Morton, treated lightly and subtly but with huge warmth. Catherine here mirrors the main plot. Her suitors are, in turn: an upright military careerist (whom she loves, but we care little for), a gentle non-entity (whom we like but she is bored by) and the imperious Morton – on the surface someone she shares few opinions with but, subconsciously, recognises a deep kinship with. Like the public reaction to the campaign, the attitudes of these people to Catherine represent the wider reactions happening off-camera. The Morton-Catherine story is a beautiful romance in which not a single word of overt, direct affection passes between the two characters, but volumes are increasingly spoken in each glance.

Mamet’s approach also allows plenty of stagy touches to translate really well to film. The film is clearly divided into acts, and each one returns us to the Winslow home, each time in less pomp than before (by the final scene it’s stripped down to bare essentials). Arthur Winslow is less and less sturdy each time we see him, the character shrinking ever closer to old age and infirmity. Each member of the family increasingly pays heavier prices, as their financial security is sacrificed (though Mamet certainly understands the characters’ very British acceptance of these turns in fortune).

The other major benefit is that the acting comes to the fore. I’m not sure Jeremy Northam has been better than he is here: the one downside of not staging the courtroom scenes is that we will never get to see Northam play them! His Morton is a perfectly pitched imperious upper-class professional, whose exterior hides a compassionate and selfless concern for “right”. The film’s most electrifying moment is his hostile examination of Ronnie, a dynamic verbal assault that rips into the film’s quiet austereness, crackling with tension. Northam is so good, at one point I am sure he muffs a line – but he carries it off with such brilliance (the austere man awkwardly burying his feelings) that Mamet keeps it in (take a look around 2:10 here and make up your own mind!). It’s also a beautifully real moment – the man of words, briefly revealed by them. This scene is, by the way, a masterpiece of unspoken emotions and affection (from both actors).

The other main performers are equally strong. Nigel Hawthorne mixes his cuddly avuncular wit with hints of the monomaniacal obsessiveness that leads Winslow to drain his resources, and strength, in pursuit of justice. While the film doesn’t always acknowledge the sometimes self-destructive effects of Winslow’s passion – and only hints at how much Winslow sees the accusation against his son as a personal affront, as if questioning his son’s honesty is questioning his own – Hawthorne keeps the character morally rigid yet sympathetic and understandable.

Rebecca Pidgeon, the director’s wife, is practically an open target for suggestions she only got the part through nepotism. Such views are unjust. While her accent seems a little forced, her performance as the slightly distant, intellectual, prickly and driven Catherine is spot-on. The crusade begins as her father’s obsession, which she shares. Their characters then evolve so naturally that you only realise at the conclusion that she has become the lead character, and the main driver of the crusade, for quite some time.

I’ve seen The Winslow Boy three or four times now. The first time I saw it I was thrown (disappointed) by its staginess, its surface stateliness. However, since then I’ve grown to appreciate its careful, respectful lack of showiness more and more. It’s an intelligent, well-handled adaptation, crammed with wonderful performances. Yes it’s sometimes a little too “Masterpiece Theatre”, but when it can deliver such stirring, and moving, moments as it does – well you could never refuse it a place in your heart. Let Right Be Done.