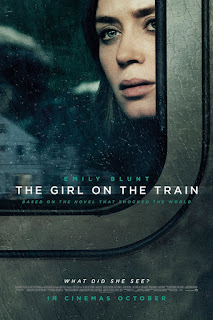 Rachel Watson (Emily Blunt) is a lonely, divorced alcoholic who takes the train into New York every day to spy on her husband (Justin Theroux) and his new wife (Rebecca Ferguson), whose house the train passes. However, she also becomes obsessed with the seemingly happy marriage of her ex’s neighbours (Luke Evans and Haley Bennett), who live an apparently Instagram-perfect life of coffee on the balcony and candlelit sex in their perfect living room (with the curtains conveniently left open – everyone leaves their curtains open in this film, no matter what they are doing). When the picture-perfect wife goes missing, she inveigles her way into their lives to try and help.

This is not a good film. It’s not a terrible film, but it’s a flat and lifeless one – a plot-boiler that simmers along without ever really getting exciting.  The story feels like it’s been pulled together from crumbs swept from the table of Gillian Flynn. It’s a hotchpotch mess, tangled, unclear and not that interesting. I can’t be the only person un-intrigued by the mystery of who shags who among the middle classes. Even a murder doesn’t spice it up. The small cast makes many mysteries obvious – when one character is found to be pregnant, but two of the three male characters we’ve been introduced to have been ruled out, you don’t need to be Poirot to work out who the father might be. Even the title is a call back to better thrillers, with its Girl with the Dragon Tattoo styled title.

The story drifts on and on, never really getting anyway or explaining anything properly. It doesn’t help that it’s mediocrely filmed. Look at the lean, compelling and sharp film David Fincher made of (the much better) Gone Girl. Then look at the murky, plodding, dull execution here. Particularly damningly it’s a shock to find out this is less than 2 hours, because it feels a hell of a lot longer.

The story has been switched from the book’s original London to somewhere outside Manhattan, which doesn’t help either. There is something quite small scale and domestic about the story that the sweeping vistas and huge houses of wealthy American suburbia don't match up with. The very concept of the film – seeing into houses from commuter trains paused at signals – doesn’t even work removed from London’s architecture (the train in this film stops regularly on a huge expanse of track due to rail works that go on for ever and ever). Edgar Ramirez’s psychiatrist keeps the name Kamal Abdic (with its suggestion of middle Eastern roots) but now seems to be Mexican. Everyone in the film looks like a fashion model. Lots of other small moments just don’t make sense in the way they would have done in the original setting.

Emily Blunt is pretty good in the lead role, much better than the film deserves. Okay the drop-dead gorgeous Blunt doesn’t even remotely look like the overweight, sweaty alcoholic described in the book. But she nails her drunk acting, and carries the emotional heft of the film rather well, with an engaging vulnerability. She is, perhaps, even a little too engaging – the book’s original version of her character is apparently pretty unlikeable. The script trims away her needy obsessiveness, and creepy stalker tendencies. But Blunt is a little too likeable, and a little too sophisticated (despite prosthetic eyebags), to really convince as the pathetic Rachel. The switch to America doesn’t help here either – basically Brits make better losers than Americans tend to.

The rest of the cast are okay, but there is hardly a stand out among them. I have to admit I found Haley Bennett and Rebecca Ferguson (with their identikit blond hair dyes) hard to tell apart at times (this may be due to staying up all night watching the 2017 British election the night before).

By the end, when the killer is revealed (with a graphically suggestive flashback) you’ll find it hard to really care. In fact the final reveal is so clumsily put together all the implications aren’t clear at all. It’s a load of fuss about nothing. Taylor is trying to turn a pulpy novel into an arty thriller – but he doesn’t have the cinematic know-how to do it. He’s far too bland and middlebrow. Maybe that makes him a suitable match – a derivative director for a derivative book – but it hardly helps make this a good film. If he’d gone for a more B-movie approach, playing up the dark satire you could find in the story, then we could have had something interesting here. But he didn’t and we don’t.
Email ThisBlogThis!Share to TwitterShare to FacebookShare to Pinterest
Labels: 2016, Allison Janney, Edgar Ramirez, Emily Blunt, Haley Bennett, Justin Theroux, Lisa Kudrow, Luke Evans, Rebecca Ferguson, Tate Taylor, Thrillers