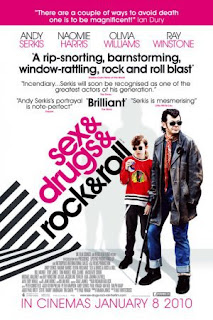 Ian Dury, one of the leading new wave British musicians of the late 70s, has his life brought to the screen in an eclectic and inconsistent film with flashes with genius. The film covers Dury’s life, from his early polio to initial success and later revitalisation. Front and centre is the effect disability has on Dury’s life, and the relationship with his son, wife and girlfriend.

The film’s main claim to fame is Andy Serkis’ brilliant performance as Dury. The role is a perfect match for Serkis’ vocal range and physicality. As a reconstruction of Dury’s style and manner it is triumphantly perfect (he has a standing invitation from the Blockheads to tour with them as Dury). What Serkis does really well here though is to delve into the heart and mind of Dury, to bring out the emotional confusion, pain and mixed desires within him – to believably present someone confusingly in love with two people, but causing both of them great pain. A man who can idolise the relationship his late father had with him, but confusingly repeat many of the mistakes of his isolated later childhood with his own children. Serkis burns up the screen, and motors the film – he’s the heart, the lungs and most of the brain as well.

It needs this ­tour-de-force of committed resurrection from Serkis, boiling with righteous indignation and cheeky charm, as the film itself is a little uninteresting to anyone not already into this era of British pop. In fact, I’d go so far as saying some initial study of Dury is pretty much essential to understand what is going on – and above all to understand the impact of various moments on the wider world. The film is rather confused in explaining the impact of this band on the cultural scene, and tends to fly too quickly over events.

It’s also stylistically an odd film. It starts with a fantastic device of Dury presenting the film like a compere at a surreal lecture, or music gig. Filmed in a concert hall, Dury runs through the events and even drags onto stage at times, like props or exhibits, moments from his past. It’s a rather avant garde idea, returned to only sporadically throughout – I suspect limited access to the filming location may have had something to do with it – but it sets up an expectation of a film that will be a bit more thematically and structurally daring than it eventually becomes. The film has a scattergun range of filmic styles, from animation to surrealist recreation, as if the director had a host of ideas about how to make the film, and threw them all in, rather than make something tonally consistent.

Away from the stylistic flourishes, you are constantly reminded that this film follows a pretty familiar series of music biog tropes: the early struggles, the success, the drugs, the loss of form, the triumphant return. The film does mine some interesting material from the relationship between Dury father and son, but even this is fundamentally a “Dad and Lad” story we have seen before.

So what makes the film stand out is the performances. Naomi Harris is heartfelt and sweet as Dury’s lover, while Olivia Williams is excellent as his understanding, undervalued wife. There are decent supporting turns from the rest of the cast, while Bill Milner underlines his promise as a performer with an intelligent turn as a son pushed into being a rebel.

It’s a decent rock biography, but depends too much on you already knowing the story – and forgiving the fact that it’s not nearly as different from other films as it likes to think it is.
Email ThisBlogThis!Share to TwitterShare to FacebookShare to Pinterest
Labels: 2010, Andy Serkis, Bill Milner, Biography, Luke Evans, Naomie Harris, Noel Clarke, Olivia Williams, Ray Winstone, Toby Jones