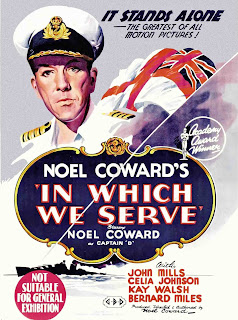 Only the British would make a wartime propaganda film about a sunk ship where over half the crew gets killed (the Navy nicknamed the film In Which We Sink). It says something about this endearingly muddle-headed country that the stories that appeal most to us are those that celebrate our struggles against adversity. It was filmed in the aftermath of the Battle of Britain but before the Battle of El Alamein – the British considered themselves safe from invasion, but still saw victory was a long way off. In that climate, the film’s attitude of knuckling down and doing your duty to achieve a distant dream must have resounded profoundly with millions of people.

Based on the early war career of Louis Mountbatten, this “story of a ship” revolves around the Torin, a destroyer captained by E.V Kinross (Noël Coward). The ship is dive bombed and sunk by the Luftwaffe, and the captain and survivors cling to a lifeboat, waiting for rescue. While they wait, the crew remember their lives back home in flashback – in particular the captain, CPO Hardy (Bernard Miles), and able seaman ‘Shorty’ Blake (John Mills). Can you imagine an American propaganda film with a plot like that?

It’s easy to mock a film like In Which We Serve today. Its stiff-upper-lipped, duty-led, hierarchical world has been lampooned countless times since Peter Cook’s pitch-perfect Bernard Miles impersonation in Beyond the Fringe. (Early in the film, watching Kinross at home, I remembered Eddie Izzard’s spoof: “Don’t go to the war Daddy / I must they won’t start without me…”). The first 30 minutes, with its clipped dialogue, fast-paced delivery and stiff-backed, formal playing style takes a while to tune into. But it’s worth it, as the establishment of this carefully controlled exterior is what makes the later sections, with strong emotions just below the surface, so moving.

Coward was of course primarily a man of the theatre, and this was his only original film script. His collaboration with experienced film-makers produced a stirring, skilfully crafted epic that reflects on several levels of British rank and society, and not only shows us “why we fight” but also “why we should fight”. Coward is credited as the principal director, but much of the direction (and the film’s skilfully constructed structure in the editing suite) comes from his co-director David Lean, here making his directing debut.

Lean’s expressive hand is clear in the brilliantly composed sequences on board the ship itself, both in action and at ease. An example of the fluid editing, is where the camera follows the progression of a missile through the ship, passed from crew member to crew member, each given some brief moments to show their quiet determination and resolve. Similarly, the sequences on the drifting lifeboat have a claustrophobic intensity about them. The flashbacks are carefully placed to allow our understanding of the characters and their backgrounds to grow each time.

The scenes back home are remarkable for their dramatic simplicity. Coward understood the stories that move are those of normal people. The sailors’ home lives – from the captain down – are domestic, calm, happy and above all normal. Very little happens: one sailor gets married, the captain plays with his children, the Petty Officer teases his wife. This regularity makes their courage under fire all the more stirring: truly ordinary people doing the extraordinary. Some critics have called Coward’s attitude to the working classes snobbish, but there is no disdain at all here – instead there’s a paternal admiration with genuine warmth.

This warmth extends even to a stoker who cuts and runs during action. It would be easy to use this moment to amplify the braveness of the others. Instead, in a moving speech to the men, the captain takes the blame onto himself for not supporting the young man earlier. The mortified stoker, in a wonderful little scene, struggles to express his shame to a barmaid, not in anger but in a quiet, confused guilt. The film never condemns or judges him – he is quietly shown returning to his duties. There is no explicit moment of redemption, just a sense of a man who has let himself down, resolving quietly to do better.

The opening sequence covers the lifespan of the ship – from its construction and commissioning, to its launch, early actions and sinking, with the implication of a nation coming together. Later scenes mix theatrical touches with documentary realism. A marvellous sequence covers Dunkirk, which feels incredibly real but also showcases a few wonderful flourishes, from Kinross’ speech praising the soldiers’ bravery to Shorty’s affectionately wry remark on the rivalry between soldiers and sailors. The final sequence brings us full circle, with the construction and launch of another battleship under Kinross’ command. We may lose a battle, but we are never beaten.

Coward takes on the lead role. To be honest, it’s a striking piece of miscasting that somehow works out – Noël Coward is no-one’s idea of a hard-nosed naval veteran. He lacks the range in particular for his scenes of domestic life, coming across as too detached and distant – particularly noticeable since his wife is played brilliantly by the radiant Celia Johnson, conveying layers of emotion under a controlled exterior. But, his quiet, buttoned-up professionalism and clipped Englishness work perfectly for the quietly emotional speeches he delivers. These he nails perfectly, his voice just giving the hint of cracking. It’s a curiously stagy, and in no way naturalistic, performance – but as a representation of a particular type of Britishness it’s perfect.

And Kinross is just the sort of man you would follow to the end – distant and authoritarian, but just and warm. Rescued from the ocean, he goes immediately to his men, moving quietly from wounded man to wounded man, collecting addresses, issuing quiet words of unexpressive comfort (“I’ll tell her you did your duty”). His closing speech (heavily based on Mountbatten’s own address to his crew) throbs with emotion just below the surface as he thanks his men – and it’s hard not to feel it as he shakes the hand of each man and is overcome with emotion, he can only nod a brief acknowledgement to his officers. Lean trains the camera on his back, as we see his shoulders seem to swell to support the pride, respect and love for his men. It’s peculiarly British, but this unspoken affection is hugely powerful.

The more naturalistic performances from the rest of the cast help to anchor the film – and also allow Coward’s more stylised acting to work effectively. John Mills is wonderful as Gunner “Shorty” Blake, a plucky, kind and witty man. He’s just the sort of unexpressive hero we’d all like to be, and his homespun love story with Kay Walsh is genuinely engaging and moving for its everyday normality. Mills also carries much of the film’s humour.

It’s the final sections of the film that really, really work. I can’t get through the scenes of the surviving crew being saved, the quiet courage of the dying men and the austere warmth of the captain, the speeches that burst with pride and respect under a reserved veneer, without feeling a lump in the throat. It’s a masterful piece of quietly powerful film-making, that pays off precisely because so much of what has gone before has been so normal. The fact that we’ve seen the lives of these people – and can see what, in their quiet way, they are fighting for – I found increasingly moving.

In Which We Serve is a wonderful piece of film-making, very well written by Coward and strongly directed (largely) by Lean. Coward himself, in the lead role, is far better at the speeches than as either a captain or husband, but the rest of the cast is excellent with Mills and Johnson both outstanding. It’s truly the stuff of spoofery in many ways today, but tune yourself up to the accents and the repressed Britishness and this is a heartfelt and deeply moving film. Perhaps one of the finest propaganda films you’ll ever see – and still so very British.
Email ThisBlogThis!Share to TwitterShare to FacebookShare to Pinterest
Labels: 1942, Bernard Miles, British Films, Celia Johnson, David Lean, James Donald, John Mills, Joyce Carey, Kay Walsh, Noël Coward, Richard Attenborough, War film, World War Two