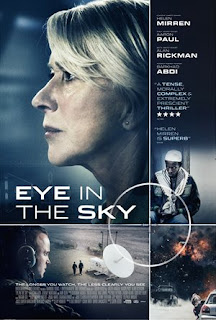 As Shakespeare said, sometimes we are urged: “to do a great right, do a little wrong”. Eye in the Sky is a film about that dilemma. Numbers 2, 4 and 5 on the terrorist “Most Wanted” list are meeting in a house in Kenya. They are preparing suicide bombers. A series of attacks could be minutes away. A drone strike will probably save hundreds of lives. Seems obvious doesn’t it? Unfortunately, sitting in the fatality zone is an innocent young girl, just trying to sell bread. Take out the bombers and you’ll save dozens of other children – but you’ll almost certainly kill this one child.

Your initial reaction to this sort of situation would probably be “thank goodness that’s not my decision”. Problem is, you get the feeling many of our elective representatives feel the same: as the situation escalates (from capture, to kill, to controlled strike, to a certainty of civilian casualties) so does the buck-passing, from politician to politician all unwilling to make a call.

Guy Hibbert’s well researched and thought-provoking script combined with Gavin Hood’s taut direction make this a gripping conversation thriller about the impossibility of moral debates. Hibbert’s script brilliantly piles moral debate on moral debate – just as we accept the desirability of one action, the circumstances change with bewildering speed. Everything, from a change of travel plans to battery failure on a vital piece of equipment, amps up the pressure and makes the situation more morally unpalatable.

The buck-passing becomes almost a dark farce in this expert script. A put-upon civil servant is repeatedly sent to communicate with a string of senior leaders, from the Foreign Secretary to the Prime Minister. Later a crucial decision takes place over a conference call, with an ever-expanding series of international attendees. It’s like a deadly serious Yes, Minister, with Jeremy Northam’s junior minister a flummoxed and vacillating Jim Hacker.

The military seems equally divided – senior officers focus on the big picture, aware of the evil they must do but seeing it as a necessity to prevent worse acts, but the junior ranks actually executing the strikes push back with increasing distress. Mirren’s colonel pressures a sergeant into effectively falsifying a fatality prediction for the girl, to push her superiors into authorising the strike on this vital target. A shallower film would have played great play of this. But Hood and Hibbert never take that easy route.

The film also explores distance conflict. Nearly all the participants are based thousands of miles away, watching on screens and pushing buttons. Rickman’s General has a knock-out final speech about his first-hand experiences of the horror of suicide bombings – and compares this to the moral objections of the greatest opponent of military action in the film, who has watched it all play out with “coffee and biscuits”. Remote warfare is neither in itself good or bad – and those objecting to actions are not angels, just as those pushing for action have their own moral reasons for doing so, and the film demonstrates that amidst all this, the “right answer” (if there is such a thing) can be almost impossible to identify.

Conversation thrillers like this are dependent on the quality of the actors – so it’s lucky we’ve got a great cast here. A gimlet-eyed Helen Mirren is as tough as you’ve seen her as the field commander who suppresses all doubt in pursuit of the greater good. In his last on-screen role, Alan Rickman gives one of his best performances as a wry, humane general who has come to terms with the hideous moral cost soldiers have to bear. His increased exasperation at the procrastination of his political masters adds some black comedy, but he also gives the character a wonderful humanity (a prologue in which he struggles to buy his grandchild a present is not only wonderfully witty, but humanises the character immediately).

Few actors do tortured conscience under the surface better than Aaron Paul – and his drone pilot turned reluctant killer provides much of the moral force of the film. Paul’s sensitive and anguished divide between following orders and living with the knowledge he’s wilfully condemning a child to death is beautifully done. Barkhard Abdi grounds his field operative not only with much of the film’s more conventional derring-do, but also layers the character with dedication and selflessness.

Eye in the Sky is a marvellous piece of tense and layered film-making. It makes high drama out of moral quandaries, and really makes us pause to stop and think about the impact of our decisions both in a wider context, and a very painful immediate one. The professional military figures – even Mirren’s cold Colonel Powell – are motivated by a painful familiarity with acceptable loss, rather than gung-ho aggression. The politicians struggle to reach a decision not only through reluctance, but with empathy for their potential victims. It overeggs the pudding with its final shots of the young girl who has unwittingly been at the centre of a major international incident, but other than that it hardly puts a foot wrong.
Email ThisBlogThis!Share to TwitterShare to FacebookShare to Pinterest
Labels: 2015, Aaron Paul, Alan Rickman, Barkhad Abdi, Gavin Hood, Helen Mirren, Iain Glen, Jeremy Northam, Political dramas, Post 9/11, War film