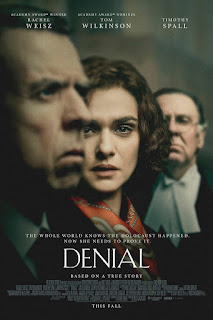 In 2000, historian David Irving (here played by Timothy Spall) was exposed as a Holocaust denier who forged and distorted historical records to help his pro-Hitler agenda. This came after his unsuccessful attempt to sue American historian Deborah Lipstadt (Rachel Weisz) for accusing him of Holocaust denial in her book Denying the Holocaust. The decision led to the destruction of Irving’s reputation, career and financial wealth. This film tells the story of this case. Lipstadt’s legal team are played by Andrew Scott (solicitor Anthony Julius), and Tom Wilkinson (barrister Richard Rampton). The publicity-hungry Irving famously acted as his own lawyer.

Denial has a fascinating story at its core, but bungles it by getting the focus wrong. Now I’ll admit I might know more about this trial than the regular guy-on-the-street. But the drama here was in the detail of the debunking of Irving’s denier bullshit. The film benches most of this, reducing Irving’s career of historical re-adjustments into a few simple sound bites. The fascination of this trial was the dissection of denier myths – but the film aims for more conventionally “drama”, by introducing a series of “could Irving win?” moments that never ring true. Not only does this detract from the drama – it also, arguably, makes it easier for Holocaust deniers out there to claim the film doesn’t give Irving a fair crack of the whip.

It’s a shame, as when the focus is on the facts of the case, it’s very good. Tom Wilkinson is excellent as the maverick Rampton, whose abrasiveness hides his humanitarianism. The drama skirts over the trial’s cut and thrust, but when it does tackle these moments it’s very interesting. The sequence where Rampton pins Irving to the floor over theories that the gas chambers were de-lousing stations for dead bodies (“then why are there bolts on the outside of the doors?”) or air raid shelters (“are we to imagine the SS running 2.5 miles from their barracks to a shelter in an air raid?”) are compelling, and far more interesting than anything else in the film. Even the Cliff’s Notes version of Irving and his views in this film is enough to repulse any sane viewer, and watching him skewered on the witness stand is fascinating and satisfying. There just isn’t enough of it.

One of the film’s greatest problems is pushing Lipstadt front and centre. This seems logical on paper but, as her lawyer says, “this trial is happening to you, it’s not about you”. Lipstadt was deliberately not part of the trial strategy, to keep the focus on Irving. But the film can’t accepts her “story” was to do nothing. It keeps wanting to give her a ‘Hollywood moment’, but the facts can’t provide one – so we get lots of scenes of Lipstadt jogging, or feeding her dog, or watching news reports – time that could have been much better spent elsewhere.

Despite this, Weisz’s performance is very good –she bravely makes Lipstadt prickly and hard to like . Similarly, Andrew Scott is excellent as Julius, but his character is poorly explained (“He’s using you for the publicity” Lipstadt is told – we see no indication for this anywhere) and his decision to exclude Holocaust survivors from the witness list to prevent them being harangued by Irving is botchily explained, the film not wanting to admit that this was a wise decision.

I feel a lot of the film ended up on the cutting room floor. Short scenes pop up now and again around paralegal Laura making you feel she must have been a more important character at some point. I feel huge parts of courtroom reconstruction got trimmed. I suspect there was more around Harriet Walter’s Holocaust survivor. Even Irving feels heavily trimmed – Spall is very good (and subtly vile, but with a persuasive old school charm) as the faux-historian, but the film needs more of him, if only to explore his views more, rather than just treating him like a demon.

That sums the film up: it’s ham fisted. Too much dialogue thunkingly introduces historical events or legal procedures. The film talks about the importance of research, but relies on characters “cracking the case” with flashes of inspiration. It handles the research trip at Auschwitz sensitively (and daringly, shows Rampton taking an aggressive questioning stance of the guides to prepare for the case) – but then the film can’t help throwing in Lipstadt imagining victims clawing at the gas chamber door for escape. I hated the final shot, lingering on the disputed holes in the gas chamber roof used to drop in Xyklon-B, as if we needed this to be confident that, yes, the Holocaust did happen.

I really wanted to like Denial, but it’s no more than an adequate dramatisation of a fascinating court case. It’s brilliantly acted, in particular the four principles. There is an interesting film to be made here about the increasing struggle we have with the abuse of free speech to give equal importance to views that are offensive or just plain wrong. But Denial never really becomes that film – instead it turns its fascinating historical event into a run-of-the-mill Hollywood tale of a plucky heroine vanquishing the bad guy.
Email ThisBlogThis!Share to TwitterShare to FacebookShare to Pinterest
Labels: 2016, Andrew Scott, Courtroom drama, David Hare, Holocaust films, Mick Jackson, Rachel Weisz, Timothy Spall, Tom Wilkinson