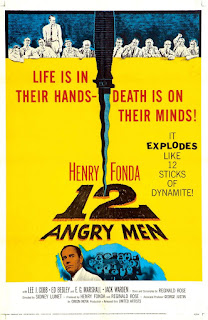 A young man is on trial for murder. The jury retires to consider. On the first vote, only one man (Henry Fonda) questions his guilt. The other jurors are convinced they are right – can Fonda turn them around?

Who hasn’t done jury service and dreamed of being Henry Fonda? 12 Angry Men is perhaps the most compelling courtroom drama ever, for that very reason: hardly any of us are judges or lawyers, but we’ve all got a decent chance of doing jury service. What would we do in this situation? How thoughtful would we be about the evidence? And, of course, that little stab of ego – could we be charismatic and persuasive enough to sway a room of people? I think this is why this film sticks with people and has become such a persuasive part of our popular culture – we all wanna be Fonda.

12 Angry Men is a film that I feel touches perfection. I thought quite heavily about whether I could identify any flaws in it at all: the closest I got at was the shot Lumet throws in of the suspect (a sweet looking kid). I suspect this shot was required so that the 50s audience could be confident that Fonda was crusading for someone who at least looked innocent (although it always makes me think, since so many of the other jurors make snap decisions, why doesn’t at least one of them look at that cute kid and think “he ain’t no killer…”). Aside from that, I don’t think there is a single mis-step in the filming, acting or writing of the film – and how many times can you say that?

Lumet is a director who doesn’t get a lot of public recognition. He subordinates his skills to the requirements of the story, rather than an auteur who imposes his style. This works perfectly for this compelling slow-burn. Lumet’s expert filming quietly lets the actors and dialogue stand front-and-centre, while cleverly using his camera language and shot choices to amp up the tension.

At first, Lumet uses wider and high angle shots, allowing us to get a sense of the room and the characters. But the real effect of this plays out over the rest of the film, as Lumet slowly moves to tighter angles at POV height, until the final sequences are played out over a series of close-ups cutting from juror to juror, at low angles. What this achieves brilliantly is to make the film feel tighter and more claustrophobic – the room feels like it’s actually shrinking in on the jurors as they argue. You can get a sense of it in the videos below, both early and later in the film.

The film also works so brilliantly because it offers a brilliant insight (and critique even?) of the legal system. The one legal professional we see is a bored judge. All references to the unseen lawyers mention either their showmanship or inadequacy. Even the jury system is subtly called into question: several of the jurors are motived more by prejudice and personal experience than by any analysis of the evidence. Others are flawed in other ways; #12 switches sides indecisively three times while #7 is so impatient and bored with the whole process, he follows the direction of the least resistance. Without #8, a decision would have been made with no discussion at all. Even the very process of taking the vote is shown to root many of the jurors down to “sides” and creates an atmosphere of competition that becomes as important as seeing justice done. And in a system of trial by your peers, only #4 in any way identifies himself as sharing the background of the man on trial. Is this a perfect system?

These ideas, though, are skilfully interwoven in the background of a gripping legal thriller. 12 Angry Men is completely objective. We never see the witnesses whose performance is the cause of such analysis. We never see the scene of the crime. We don’t have any confirmation at all that either side is right. It’s a film about the importance of reasonable doubt – and the need to be absolutely certain before sending someone to the chair. Fonda feels that doubt – and persuades the other jurors of it – but we never know if he was right or not. We never know if any of the suppositions in the jury room are true – the important thing is how high the possibility is that they might be true – and how much that affects our willingness to convict.

The film is one brilliant set-piece after another, as each piece of evidence is interrogated. I honestly can’t decide which one I like the most. What makes it work is the variation of how each case is presented. The film is as comfortable with the drama of #8 flinging a replica of the “unique” murder weapon onto the table, as it is with a careful dialogue-led dissection of the eyesight of a key witness. Who can resist Fonda limping around an approximation of the nextdoor neighbour’s flat to see if he can cover a certain distance within a certain time. It helps that the dialogue is incredibly rich – it has to convey a lot of information, but also manages to sketch out each of the characters so swiftly and carefully that each of them feels real.

And we’ve come all this way and not even mentioned the performances. Again, each viewing gives me a chance to appreciate a new performance: my eye was caught on this viewing by Robert Webber’s seemingly cool and collected advertising man, who has far less certainty than he projects. Needless to say each actor is brilliant. Fonda (who also produced) is the very image of moral authority – as well as a generous collaborator on the movie. Is this his best performance? It’s got to up there - #8 is a humanitarian, but he’s never smug or self-serving, just a man who feels a strong sense of his own obligation.

If Fonda is the superego, Cobb’s #3 (the primary antagonist, if there is such a thing) is the ego – raging, elemental, decisive, unshaken in his beliefs. Cobb’s performance veers the closest to a little too stagy, but it’s a character that demands it. His bluster and swaggering are vital to the character in order to make his later emotional collapse work as well as it does – and #3’s final emotional disintegration really rings true. It’s a ferociously intense performance.

Each actor gets his chance to shine. Voskovec’s sensitive immigrant has a wonderful speech on the responsibility of passing judgement. The most barnstorming speech is Begley’s racist outburst late in the film. It’s beautifully done as this loud-mouthed bully explodes with frustration, then slowly and even rather sadly collapses as he talks on and on, each sentence making him weaker and weaker, more defensive and vulnerable. But it’s never a scene about just one man – the reactions are as well judged as everything else. And I can’t tell you how much I love #4’s “I have [listened to you]. Now sit down and don’t open your mouth again” one-line response which caps the scene.

In fact just mentioning #4 brings on my love of E.G. Marshall’s performance in this film. #4 should be one of the least engaging characters in the film – coldly analytical, professional, assured and clear minded. But he’s always human, never an antagonist, but a respected citizen – the only one of the jurors who is motivated by judgement rather than prejudice. I love his calmness, his cool lack of regard for #3 and #10’s loud-mouthed berating, his patient, studied explanation of his convictions. I adore his calm puncturing and counterview of each point Fonda puts forward, until he is finally won over – and its his winning over which makes the film work. If this thoughtful, intelligent man has doubts, shouldn’t we all?

But I repeat they are all great. Jack Warden’s #7 is totally convincing as (the film’s real villain?) a man indifferent to right and wrong when compared to his own needs. Balsam’s decent but ineffectual #1 is the perfect mediocrity in above his head. Sweeney’s wry, observant and shrewd #9 is a delight (Sweeney was the only member of the original TV play to be retained). Fiedler’s #2 grows in moral force throughout, belaying his quiet appearance. Klugman’s #5 is quietly defiant and conflicted. Binn’s #6 reveals himself as a mild, humble and honourable man.

I think I could watch 12 Angry Men every week of the year. It’s brilliantly filmed (how could I not mention the oppressive rain soundtrack that accompanies the latter part of the film) and wonderfully directed. The script is simply perfect, Reginald Rose expanding and enriching his original TV adaptation. The acting is nearly flawless from all concerned. It’s, quite simply, a great movie. I simply can’t imagine anyone not reflecting on this movie when heading into jury service. It subtly comments on the legal system, but never gets bogged down in this, telling a gripping and compelling story about things we never see. It’s pretty damn near close to perfection.
Email ThisBlogThis!Share to TwitterShare to FacebookShare to Pinterest
Labels: 1957, Courtroom drama, E.G. Marshall, Ed Begley, George Voscovec, Henry Fonda, Jack Klugman, Jack Warden, Lee J. Cobb, Martin Balsam, Sidney Lumet