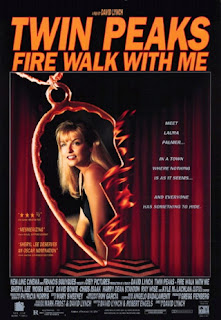 Twin Peaks was a mystifying, but very short lived, sensation. Its first series gripped America with its whodunit mystery around who killed Laura Palmer: it was an early 90s Broadchurch with added mysticism and twisted Lynchian psychosis. Just like Broadchurch, the second series stumbled from disaster to disaster as the answer to the mystery was revealed. Though this plot line was dark, disturbing and haunting, effectively contrasted with the surreal humour of the rest of the show, large chunks of the episodes were, to be honest, terrible. As Lynch’s attention turned elsewhere, the show fumbled through half a season of increasingly bizarre, pointless, laughable and plain rubbish episodes, before rallying at the end with a return to the mysterious dwelling on the nature of evil that the series is now best remembered for.

Twin Peaks is a rare anomaly – a show whose most die-hard fans would probably admit at least a quarter of the episodes were terrible. Ratings had dropped off a cliff as the series went on (sure enough it was cancelled). The cast and crew knew the show had lost something – several actors, most notably Lara Flynn Boyle (here replaced by Moira Kelly) refused to appear in the film. Even the show’s star, and Lynch surrogate, Kyle MacLachlan only agreed to return for this film for a few brief scenes (requiring an urgent re-write). However, Lynch’s interest in the concept had clearly been awakened during his writing and filming of (what would become) the final episode, surely one of the most surreal, unsettling, bizarre, intriguing and disturbing episodes of TV ever screened

Twin Peaks: Fire Walk With Me was Lynch’s final reclaiming of the series from the toilet it had dropped into. It also served partly as a “retcon” to tie the foundations of the original series plotline into the mythology the show had deepened in its final few episodes (built upon many surreal elements Lynch had introduced in the first episodes, otherwise hinted at rather than explored). As much of this mythology was unsettling, this movie very much follows that mood, losing much (if not all) of the dark, surrealistic humour that contrasted the darkness so well in the series. Twin Peaks: Fire Walk With Me is a strange movie that is more like an expanded extra episode of the series, rather than a stand-alone. It makes no attempt at all to appeal to anyone who hasn’t seen every episode of the series: I’d go so far to say it’s almost completely impenetrable without having sat through all of Twin Peaks.

The film explores two plot-lines: the first an investigation by FBI Agent Chester Diamond (Chris Isaak) into the murder of Teresa Banks, a plotline referred to many times in the series. The film then flashes forward a year to cover the final few days of the original murder victim Laura Palmer (Sheryl Lee) and her relationship with her father Leland Palmer (Ray Wise), who is possessed by a demonic presence known as BOB, driven by it to perform acts of sexual and physical violence. Laura is aware – and terrified – of the existence of BOB (a greasy haired face from a thousand nightmares) but seems unable to recognise that BOB and her father are one and the same. It’s the discovery of this in the film that will help to tip her over the edge into despair.

If the film is about anything other than expanding the mythology around BOB and the mysterious “Black Lodge” between dimensions, where evil and violence abound, it’s about the damaging impact of domestic abuse. The film intensely explores the personality damage Laura (an excellent and fully committed Sheryl Lee, leaving nothing in the locker room in a performance of fearless intensity) has suffered as a result of years of sexual abuse from her father (Ray Wise equally good as his personality veers wildly between gentle father and possessed evil rapist). Laura’s fractured psyche is the root cause, Lynch makes clear, of her sexual promiscuity, drug addiction and flashes of cruelty. She’s even aware of the damage, as seen in her desperation to protect others (especially the gentle Donna) from being sucked into the nightmare of her life.

The unremitting bleakness of Laura’s disastrous life is intermixed with the horror of the scenes where we witness Leland’s destructive behaviour to her, while the final scene of her eventual murder is haunting in its skilful nightmare imagery and suggestive editing. Lynch’s direction remains humane and tender, and despite putting Sheryl Lee through the ringer she never feels exploited. Instead, the film has an incredible empathy for both her suffering, and the confused, damaged actions she is driven to carry out. It gives us an understanding of the damage that can be done to even the strongest seeming people by abuse.

Alongside this, Lynch unleashes the full range of dark surrealism through a series of disturbing images to build up his mystical backstory. This is a flat out horror film, with twisted images of monkeys, blood and forests guaranteed to haunt your dreams. Nearly every scene in Twin Peaks repositions the often quirky town of many of the episodes as a nightmareish world of neon, darkened rooms and twisted sexual and physical violence. The portrayal of Laura Palmer’s fragile heart is as intensely moving as it is intensely filmed, while the views behind the red curtain into the hellish underbelly of Twin Peaks’ mystical mythology will stick with you for some time – and is sure to be central to the new third series.

Twin Peaks: Fire Walk With Me was met with intense hostility when it was released: “It’s not the worst movie ever made,” the New York Times review read, “it just seems to be”. David Lynch publically stated he had clearly done when the network couldn’t do, and successfully killed Twin Peaks. Of course that wasn’t the case – with the new third series finally coming to the screen 25 years after the screening of this film. The re-evaluation of the film has only grown in the intervening period. The nightmarish content (and the final scenes of the series) – the wicked BOB, the nightmare of the Black Lodge and the Red Room, the elements of psychological horror – these are the things that Twin Peaks is remembered as being about: the rotten core of the sweet pie of the town.
Email ThisBlogThis!Share to TwitterShare to FacebookShare to Pinterest
Labels: 1992, Box office bombs, David Bowie, David Lynch, Horror film, Kiefer Sutherland, Kyle MacLachlan, Moira Kelly, Ray Wise, Sheryl Lee, TV spin-off