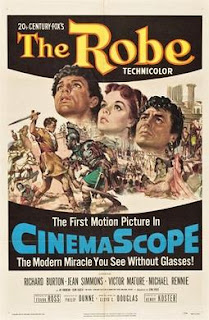 In 1953, Hollywood was running so scared of TV they needed a magic cocktail to win viewers back to the big screen. They settled on their main advantages over TV – a very big screen, colour and a lot of money. Sweeping epics were born – but in order to get as many people in as possible, gotta make sure it’s an important piece of filmmaking as well. What’s more important than religion?
Marcellus Gallio (Richard Burton) is a carefree playboy Tribune, interested only in splashing his cash on bets and slaves. After betting against heir-to-the-throne Caligula (Jay Robinson) for rebellious slave Demetrius (Victor Mature) – plus charming away Caligula’s betrothed Diana (Jean Simmons), also Marcellus’ childhood sweetheart – he is banished to Palestine. Marcellus is soon ordered to crucify a humble carpenter from Nazareth, leader of a new religion that Demetrius swiftly converts to. After being confronted by his former slave atop Calvary, Marcellus finds himself wracked with guilt about his actions – and on a journey towards conversion and martyrdom. The Robe of the title is the Turin shroud, here a red rag macguffin passed from pillar to post

By any objective standards, The Robe is a pretty terrible film. It’s long, self-important, slow, talky, episodic, poorly-structured and, above all, boring. Despite its length, nothing much really happens. Marcellus is a waster, he crucifies Christ, he feels guilty, he goes a bit barmy, he converts, he dies. That’s kind of it. When important moments happen, they flash past so quickly you start to think you missed something – I rewound Marcellus’ crucial conversation with St Peter where he finally converts as I assumed I’d missed something he changes his mind so quickly. I hadn’t.

The whole film is full of sudden, juddering changes like this. Marcellus and Diana are estranged for years – next thing we know they are in each other’s arms. Demetrius is a convert after one glance. Within seconds of screentime, Marcellus goes from unconcerned to wracked with guilt over Christ’s death. The whole first scene sets up Caligula as an antagonist only to have him disappear for almost an hour. Demetrius is suddenly being racked in a dungeon in Rome. The film keeps slowing down for lots of Christian reflection on the righteousness of the holy message.

Oh blimey, the Christian message of the film is not subtle. The film drips with sanctimony and wearying self-importance, with no trick missed. Angelic voices, light from the sky, actors staring upwards with awe, impossibly sweet youths frolicking with joy, wise old buffers droning on: it’s all here, every single note you would expect of the classic Hollywood “Swords, sex, sandals and sanctimony” epics. It’s all ridiculously on the nose, with Burton reduced to having to carry the entire weight of Christianity seemingly on his shoulders, with only the most bland and forgettable of lines to support him. Nothing eases up right into the final moments, when Marcellus and Diana walk towards the camera as the background fades away to be replaced by clouds. Yeah we get it: they are off to heaven. The big thing the film struggles to get across in all this is why the Christian message had such appeal to Marcellus and others, or why these people might have put so much at risk for it, but this sort of thing is beneath the film’s clumsy interest, as if any actual analysis would be sinful.

Burton, bless him, struggles through the role with the slightly disconnected air of a man who thinks the entire film is beneath him (he famously called the role “prissy”). He must have been stunned to get an Oscar nomination. But to be fair it’s a really tough part, with Marcellus required to go from a sort of relaxed dissoluteness, via disconnected pride, to a sort of catatonic series of fits before back to serene peace. Saying that, Burton’s fits over the robe itself aren’t going to win any awards for subtlety, done with a wild eyed hamminess that looks impossibly old fashioned today. But it’s all comparable – next to Robert Taylor in Quo Vadis, Burton feels like the height of emotional realism. It’s not helped that he’s paired a lot of the time with Victor Mature, who acts throughout with a sort of balsawood earnestness that requires a great deal of middle distance staring in awe. The video below gives a good idea of both performances. Watch how wildly varied the writing is of Burton's part and feel a little bit sorry for him.

Very few of the other performances make positive impressions. Jean Simmons as Diana is such a bland, forgettable character that her conversion only really makes sense because we have learnt so little about her over the course of the movie. Jay Robinson goes for overblown as Caligula but instead sounds like a shrieking child in a pretty woeful performance.

These two failed performances add to the film’s problems. Caligula is such a non-presence for most in the film that, as the nominal antagonist, his lack of impact makes the film shapeless, lacking any “villain” we can hate or provide any sort of obstacle for Marcellus to struggle against. Similarly Diana is so bland and anonymous a personality, that we neither root for their relationship, nor experience any concern for its outcome

The film is directed and framed in an equally dull way. Its only claim to fame today is its status as the first film to be released in Cinemascope. This ultra-wide screen was intended to be another rival to TV – never mind the little box, look at the mighty vistas! But the importance of widescreen hangs over every creative decision of the film. Nearly every shot in Koster’s turgid direction is either middle or long, with the camera held static, focused on getting as much of the background in as possible, the actors often reduced to focus or foreground interest around the scale. It’s no wonder few performances break through this overbearing backdrop.

Every so often you get moments where you think the film is going to burst in life. They’re rare but they are there. There is a great scene between Demetrius and a man revealed (eventually, but it’s pretty obvious from the start) to be Judas Iscariot fresh form Gethsemane (Michael Ansara as Judas might, in two minutes of screentime, give the best performance in the film). Marcellus has a pretty good (if inexplicable) sword fight with a former rival. A mission is launched to rescue Demetrius. But every time something happens like that, the film immediately doubles back into heavy-handed symbolism and dull, unrevealing chat, all of which is focused on hammering home the message.

The Robe is an impossibly dated religious epic, worthy, dull and lacking any real interest or reason to watch it. Its star seems a little embarrassed to be there. No-one else makes any impact. It’s directed with a flatness that turns it into a series of lifeless paintings. Its story turns a major moment of history into a boring, inconsequential series of events. It lacks even the campness that many epics of this genre carry that make it a good tongue-in-cheek watch. It’s just a yawnathon from start to finish, a crushingly tedious saga that has all the subtlety of being hit across the face by a prayer book for over two hours.
Email ThisBlogThis!Share to TwitterShare to FacebookShare to Pinterest
Labels: 1953, Biblical epic, Christian movies, Dean Jagger, Henry Koster, Historical epics, Jay Robinson, Jean Simmons, Michael Rennie, Richard Burton, Victor Mature