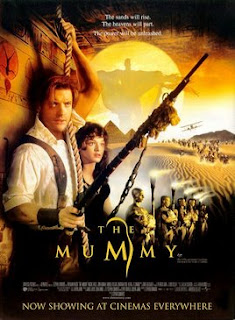 The Mummy came out so many years ago that it’s being “rebooted” again as a Tom Cruise vehicle, as part of a Universal “Monsters Cinematic Universe” (oh dear God, even writing it sounds terrible). I’ve no idea what the new Mummy is like, but I am pretty certain it won’t match this film for fun, excitement, wit or (most of all) honest, gee-shucks B-movie charm.

In ancient Egypt, High Priest Imhotep is cursed and buried alive after his affair with Pharaoh’s mistress; should he rise again, he will do so as an unstoppable monster. Flash forward to 1926 and adventurer Rick O’Connell (Brendan Fraser) is hired by Egyptologist Evie Carnahan (Rachel Weisz) and her chancer brother Jonathan (John Hannah) to guide them to the hidden city of Hamunaptra. There, in competition with a rival American team of explorers, they find the body of Imhotep, read aloud from the book of the dead, bring Imhotep back to life – and all hell breaks loose.

I’ll say it straight out: I think you’ve got to have a pretty hard heart not to have a soft spot in it for The Mummy. Tonally, it’s one of the few Hollywood family-action films that doesn’t have any major miss-step. It’s a silly, rather warm-hearted, B-movie action with intensely likeable leads and a series of entertaining set-pieces. Every frame has been shot and framed like an epic, old-school adventure movie – and the plot knowingly runs with its clichés. It’s a film with literally no pretensions, which embraces its status as a piece of entertainment. And, I’d say, it succeeds magnificently at doing that.

It’s helped by a hugely charming performance from Brendan Fraser as a combination of Indiana Jones and Humphrey Bogart in The African Queen. Fraser’s got the chiselled good looks, but also a great deal of timing. The film gives him plenty of bon mots (“Patience is a virtue” Evie cries while decoding hieroglyphics; “Not right now it isn’t” Rick replies, staring at the hordes of possessed Egyptians heading their way) and he delivers them with a perfect 1930s matinee idol charm. It also helps that he has terrific chemistry with Rachel Weisz.

Weisz plays her part with a sweet comic charm, but adds a growing toughness to the character that prevents her from being a damsel in distress. John Hannah is pretty good value as her comic relief brother, while Oded Fehr makes such a great impression in limited screentime as the representative of a group of ancient guardians, you are surprised he hasn’t had more opportunities since then. Arnold Vosloo plays the Mummy with a tinge of sadness round the edges that humanises a man who is literally a monster.

Stephen Sommers directs the film with a witty sense of visual humour. This ranges from the obvious comedy (a 360 shot that takes in Evie knocking over a series of bookcases) to the satirical (he has a lot of fun with the gun-toting, ill-fated American explorers throughout the film). He also keeps the film barrelling along, without overlooking opportunities for character development. Despite the constant stream of action beats you always feel you understand exactly what motivates Rick and Evie – and their growing attraction to each other feels carefully developed.

Perhaps in a way The Mummy shows how films have changed in the last 17 years. When it was released, it was denounced as a big, dumb action film. However, compared to some of the fast-cut, poorly scripted rubbish churned out now, it looks rather sweet, well structured and focused more on character than on effects. As such it’s a really enjoyable and charming film, miles head of crap like Batman vs. Superman. Release exactly the same film today and I think many would call it a breath of fresh air, without the wearying self-important tone that weighs down so many modern blockbusters.

No it’s not a work of genius and no it’s not perfect. Omid Djalili’s character sails perilously close to racial stereotype. The killing scarab beetles in particular sometimes go marginally too far for its family audience. The special effects look a bit dated at points. Logically of course the plot barely stands up to thinking about: who on each curses someone with a terrible curse that makes them invincible and immortal? Why not just punish Imhotep by killing him badly eh?

Sommers is no master film maker – later Mummy films would largely fail to recapture this magic – but when he gets his boys-own, B-movie style bang-on, as he does here (and in The Rocketeer), he is a wonderful entertainment merchant, who makes engaging, entertaining films. No it’s not going to win any awards or trouble any top ten lists, but it’s always going to put a smile on your face.
Email ThisBlogThis!Share to TwitterShare to FacebookShare to Pinterest
Labels: 1999, Action Films, Arnold Vosloo, Brendan Fraser, John Hannah, Jonathan Hyde, Monster films, Oded Fehr, Rachel Weisz, Stephen Sommers