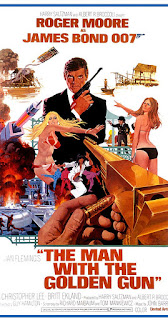 I sat down to watch The Man with the Golden Gun having just heard the news of Roger Moore’s death. It seems an odd one to choose, as this was easily Moore’s least financially successful, and least fondly received, Bond film. But it had just been on TV, and I wanted to raise a glass (or eyebrow) to Britain’s finest.

MwtGG was very much the formula trying to find its way in a post-Connery world, with Moore’s performance an odd half way house between his later light persona and the harder edge of Connery. Anyway, the plot, such as it is: Bond is sent a bullet with his name literally on it from Francisco Scaramanga (Christopher Lee), the world’s greatest hitman who only uses golden bullets and charges a (now rather sweetly modest-sounding) $1million per hit.  Bond goes to Hong Kong to find out more and gets embroiled in some complex (and not particularly interesting) back-and-forth about hijacking the world’s solar energy supply, hindered by incompetent agent Mary Goodnight (Britt Ekland). It all culminates into a duel of guns on Scaramanga’s private island.

The problem with this film isn’t so much that it’s a bit dull – it’s that it’s not really about anything at all. Does anyone really understand Scaramanga’s scheme? Even he seems confused about it. As far as I can tell it’s something to do with controlling solar energy, but how the heck he’s going to control access to the sun I don’t know. Scaramanga seems far more interested in a silly heat gun he’s got as a side installation. Anyway, whatever the heck this is about, lots of other people seem interested in it. It’s powered by “the Solex”, which looks like some sort of robotic cigarette pack. This Solex changes hands even more regularly than Bond changes love interests, but its purpose and why it’s important are such a poorly explained macguffin it’s really hard to care.

What the film is nominally about (but turns out not to be) is the duel between Scaramanga and Bond. Turns out, of course, Scaramanga doesn’t have a clue about the bullet. His motivations towards Bond are as unclear as the plot, alternating between indifference, admiration and envy. On top of that, to make a duel like this work we need the feeling Scaramanga and Bond are two sides of the same coin – that with a push at the right time in his past, Bond could have turned into the ruthless hitman Scaramanga is. This could have worked with Connery’s early Bond – or Dalton and Craig – but never do you believe Moore’s Bond has a streak of black through his soul.

This is despite some ill-fitting moments in the film, created solely in an effort to show Moore’s Bond acting tough, moments that feel horrendously out of place and against character. In particular, early in the film Bond quite viciously roughs up Andrea Anders (he slaps her, nearly breaks her arm, spies on her with the shower and threatens her with a gun in a weirdly sexual manner). It feels totally wrong for Moore’s gentle suaveness. At other points in the film, Moore plays with a hardness and general prickishness that isn’t present in his other films, and doesn’t match his light style. Throughout the film he feels annoyed at Goodnight, he pushes a kid off a boat, he treats his colleagues dismissively – it feels all the time Moore is struggling to play a Bond way against his style.

To be fair, I can see why Bond is annoyed with Goodnight: Britt Ekland is probably the nadir of Bond girl stupidity. Literally nothing she does in this film is any use, and most of the rest of the time it actively helps the villains. She’s stupid, clumsy and not funny. She’s so incompetent you need to keep double checking she is actually meant to be an MI6 agent. Ekland has indignities heaped upon her on this film, from being locked in the boot of a car, to being hidden in a cupboard by Bond mid-coitus so that he can do the nasty with Scaramanga’s girlfriend. Late on, she nearly kills Bond by backing into a button with her bottom. Ekland’s main reason for being cast was of course her physical assets in a bikini – so it’s lucky that Scaramanga keeps her on his island dressed only in a bikini for the last third of the movie. Only way to make sure she doesn’t have a weapon, doncha know!

As the plot drifts around, going either in circles or nowhere at all, the producers land Bond in a kung-fu training school in Hong Kong. Bond films as a genre have always gently ripped off as much as possible whatever was popular at that time in Hollywood (Blaxploitation in Live and Let Die, Star Wars in Moonraker, Bourne in Quantum of Solace etc. ), and so it merrily climbs on the Bruce Lee bandwagon here. Unfortunately, it’s all highly stupid and adds nothing (Scaramanga even comments in the movie about the ludicrousness of sending Bond to a school rather than just putting a bullet in him) and hits heights of ridiculousness when the entire school of elite trainers is bested by Bond’s sidekick and two teenage schoolgirls in school uniform.

That’s another thing wrong with this movie – the wildly varying tone. So at times we get Bond chasing down leads like Philip Marlowe. Next we have him roughing up a weeping woman. We’ve got Goodnight’s buffoonery, Scaramanga’s suave cruelty… It’s all over the shop. The comic moments of the film particularly grate. Was anyone waiting for Sherrif JW Pepper’s return from Live and Let Die? Didn’t think so, he’s as funny as a bout of gonhorrea. Even some of the good moments get undermined by bizarre tonal shifts: the classic car flip stunt (which is amazing, particularly because you know they did it for real after hours of careful calculations) is overlaid with a stupid “whoop” sound effect, like a Carry On film (even Guy Hamilton subsequently said this was a terrible idea).

However, it’s not all bad – no Bond film ever really is, such is the triumph of the formula. Christopher Lee is very good – you wish he was in a much better film than this one. The late duel in the film between Scaramanga and Bond is pretty good, even if it all ends a little too easily. Scaramanga’s funhouse seems totally bizarre (why the hell does he even have this on the island next to a power plant?) but its good fun. The MI6 base on a half sunk ship off the coast of Hong Kong, with all the corridors on the wonk is an absolute triumph of design. Bernard Lee gets lots more to do than he usually does – and delivers his exasperated boss lines with a sense of dry timing.

It doesn’t change the fact, though, that this is possibly one of the weakest Bonds around. It’s not a terrible film – I enjoyed watching it, though at least part of that comes from growing up with these films, making them as familiar as family members. But it’s way down there in the Bond list. It’s a slightly tired movie, in a franchise trying to find its feet under a new lead. Tonally it’s a complete mess for large chunks of it, and manages to make its plot seem inconsequential and dull. Nothing really seems that much at stake, and Scaramanga (despite Lee’s good performance) never feels like a villain we really understand. I’ve no idea what he wants, and no idea why he should be stopped.

The Man with the Golden Gun is only worth it for a doze in front of the television on a Sunday afternoon. Thank goodness that’s the only time it’s likely to appear on your TV. And putting all else aside, Moore was a terrific Bond and an even more terrific human being. Rest in Peace.
Email ThisBlogThis!Share to TwitterShare to FacebookShare to Pinterest
Labels: 1974, Bernard Lee, Britt Ekland, Christopher Lee, Guy Hamilton, James Bond, Maud Adams, Roger Moore, Spy thrillers