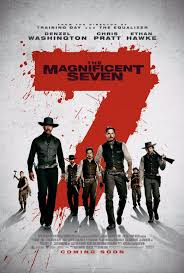 The Magnificent Seven is a much loved staple of BBC bank holiday weekend screenings. The original wasn’t a brilliant piece of film-making art, but it was a brilliant piece of film-making entertainment, and it had simple, wry, heartfelt (if sometimes on-the-nose) observations to make about the sacrifices the life of a gunslinger calls for. How does the remake measure up?

In 1879, the village of Rose Creek is besieged by would-be industrialist Bartholomew Brogue (Peter Sarsgaard), who orders the villagers to leave as he plans to expand the local mine. Newly widowed Emma Cullen (Haley Bennett) sets out to recruit gunslingers to help protect the town. Warrant Officer Sam Chisolm (Denzel Washington) is her first recruit, and he helps her to gather six others from drunken cardsharp Joshua Faraday (Chris Pratt) to legendary sharpshooter Goodnight Robicheaux (Ethan Hawke). But the battle to protect the village will lead to many good men six feet under before our heroes can have the chance to prevail…

One thing’s for sure. In 60 years’ time they won’t be playing this film every bank holiday weekend. That doesn’t mean this is a bad film, it’s just quite an average one. It’s decently done, has several good scenes and even one or two witty lines in among a fairly routine script, but there is very little imagination or inspiration behind this. It’s got a decent cast of actors, but you always feel they are lifting average material rather than working with the good stuff. While the original film combined a sense of boyhood heroics and some iconic performances with some exploration of the emptiness of the life of a gunslinger and the attraction of a normal life, this film manages to deliver much less on all these counts.

So first the good parts. Much of the gun-toting action is very well done. The first shootout as our heroes arrive in the town is terrific (see link below), full of thrilling beats and rewindable moments. To be honest, it’s the best moment of the film, and as close as it comes to capturing the excitement of old-school gunslinging action. The final battle scene is decent, but offers generally more of the same with additional (no spoilers to say) sacrifice. Even without the inspirations of the original film, many of the character beats will be familiar to the watching audience. I successfully predicted which of the cowboys would survive early in the film, and only one death is near to a surprise. It’s well done, but it’s not got the filmmaking expertise of Kevin Costner’s Open Range, with its final small-band-against-an-army structure, nor that film’s intelligent and low-key analysis of the cost of violence.

It’s that lack of human insight that I think is one of the film’s principal weaknesses. The original had more to say about the damage a life of violence can inflict on people, and the longing even the most hardened man of the world can find for  the simple life – as well as the lengths they will go to in order to protect it. This film offers none of that. The motivations for the seven in joining are incredibly thin, almost after-thoughts. At least two members of the team simply turn-up, as if dropped from the sky. Team leader Chris has a “very personal” motivation, signposted from the very start, that serves to undermine much of the depths we seem to learn about his character during the film – as well as making him just another “man looking for revenge” architype.

On top of that, a serious trick is missed when setting this film near the end of the Western era. Already the time of these lawless gunslingers is coming to an end, and they have no place in the modern world. The villain is a sort of corporate bully, launching a hostile take-over of the village for his mining company. There is plenty of thematic material to mine here of these men taking a stand not only against the strong persecuting the weak, but also against the onrush of time that is leaving them behind. Now I’m not expecting the film to be a serious socio-economic discussion, but I’d like to watch a film that at least tips the hat to ideas like this (or any ideas at all) rather than just push through a well-filmed but-by-the-numbers remake.

Saying all this, it is pretty entertaining in an unchallenging way. It does make you want to go back and re-watch the original version (which was itself, to be fair, little more than a crowd pleaser). But that’s kind of all it is – and it doesn’t have any ambition to be more. But it’s a good watch and some of the updating ideas work very well. The multiracial composition of the seven works very well, and Haley Bennett as the “Eighth” member of the team, is a strongly written role that feels like a character rather than an accessory. Washington can do this role standing on his head, but brings his customary authority. Chris Pratt is at his Harrison Fordish charming best, particularly on the edge of bursting out into a childish grin, in gleeful excitement at being paid to play cowboys. Hawke is saddled with the thematic content as a gunslinger with PTSD, but makes a good fist of it. Much of the rest of the gang are a collection of moments rather than characters, but do their jobs well.

The Magnificent Seven, it seems too easy to say, isn’t magnificent. It’s an unambitious film without any real thinking or imagination in its conception. It seems scared of introducing anything too conceptual or thought-provoking in its setting or plot. It’s just about entertaining enough to survive while you are watching it, but its life is going to be little longer than the two hours you watch it, not the 60 years of its predecessor.
Email ThisBlogThis!Share to TwitterShare to FacebookShare to Pinterest
Labels: 2016, Antoine Fuqua, Chris Pratt, Denzel Washington, Ethan Hawke, Haley Bennett, Peter Sarsgaard, Remakes, Vincent D'Onofrio, Westerns