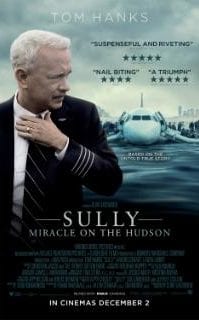 Eastwood’s emotional, skilfully made film brilliantly recreates this true-life event, with Hanks taking on the lead as Sully. The framing device Eastwood uses is the National Transportation Safety Board investigation into the crash, here re-imagined as an almost persecution, convinced that pilot error and failure to react quickly enough were the causes.

What’s most striking for me is this film’s tribute to the professionalism and heroism of everyone involved. Just as Sully states during his hearing, this was a team effort, not the work of a lone hero. This comes across strongly here. Air hostess is a profession which, god knows, it’s easy to mock: but this film shows their unflappable bravery, calmness and leadership. Similarly, the first responders are dedicated and compassionate. I’m not ashamed to say I felt myself choke up at one point, when a first responder tell one waterlogged passenger “no one dies today”. The film ends with a tribute to New York coming together to save lives – and it’s a message ringing through the film.

Eastwood knows the drama of the film is directly linked to the crash, so weaves this event throughout the film, returning to it at least four times from different angles. He opens the film with Sully’s nightmare of what could have happened if he had flown towards an airport (the plane ploughing into New York) – a grim reminder of what could have been, which hangs over the rest of the runtime. The evacuation of the downed plane is gripping, and is filmed with a restraint that lets the events speak for themselves. The emotional force throughout these sequences is compelling.

Tom Hanks is perfectly cast as the low-key everyday hero achieving the impossible with only quiet courage and years of experience behind him. To be honest, it’s a role Hanks could probably play standing on his head, but his quiet everyman quality is essential to the film’s success. He’s well supported by Eckhart and other members of the cast.

It’s good Hanks is so assured, as he is required to anchor much of the film’s plot. The plot is where the film struggles as, to put it simply, the story away from the crash isn’t actually that dramatic or interesting. An attempt has been made to make the investigation into the crash into a sort of inquisition into Sully’s actions, but it never really rings true (it largely wasn’t) and it’s never really interesting enough, certainly not when compared to the crash itself.

In fact, it’s hard not to think that there is some sort of message being built into the film here, contrasting the low-key individual Sully with the faceless, procedural suits who can’t imagine the importance of the human element. Maybe that’s reading a bit much into it, but either way it’s average drama: there is never any doubt in the viewer’s mind that Sully will be completely exonerated. It’s an attempt to add dramatic tension to a story everyone already knows.

Furthermore, Sully is too “normal” a man to sustain a drama around his life: in another film inspired by these events, Flight, Denzel Washington played a drunken pilot who saved an aeroplane in a moment of inspired flying. The drama of that film was based on the film’s exploration of Washington’s character’s lack of responsibility vs. his act of heroism. Sully doesn’t have this, so we don’t get that sense of conflict within the character or with others. Put simply, Sully is such a regular decent, guy that, outside these unique circumstances, he is not really a dramatically interesting character – and the film can’t create a plot that brings drama out of his situation.

So Sully is a mixed bag of a film. Hanks gives his best as ever, but the film can’t really get over the fact that it’s recreating a moment in history, and fails to give that moment an effective dramatic framework. There is some good supporting work, although many of the other roles are thankless (Laura Linney’s role in particular is literally phoned in), but the film only flies when the plane doesn’t. The reconstruction of the event, and the people who were involved in it, is inspiring and stirring – but the rest of the film is little more than a humdrum courtroom drama.
Email ThisBlogThis!Share to TwitterShare to FacebookShare to Pinterest
Labels: 2016, Aaron Eckhart, Anna Gunn, Biography, Clint Eastwood, Disaster Films, Laura Linney, Tom Hanks