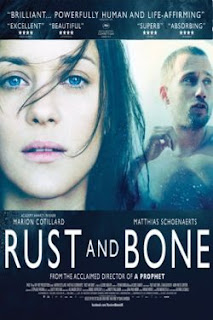 It’s the plot of a melodrama, staged like social-realism. Written down it sounds like the purest Hollywood schlock: crippled killer whale trainer Stéph (Cotillard) enters into a friendship that grows deeper with would-be kickboxer Ali (Schoenarts), who has a troubled relationship with his 5-year-old son. But the realistic portrayal of the pain of losing your limbs (in a scene of raw intensity from Cotillard) and Ali’s troubled homelife, penchant for casual sex and occasional resorting to violence when frustrated, pegs the film style farcloser to a hard-edged Bicycle Thieves. The film also has a lyrical poetry about it, as their relationship gently develops from friends with benefits to genuine feeling, which stops it from feeling gritty or hard-edged.

The film’s main strength is the brilliance of its two leads. Cotillard is outstanding as a passionate free-spirit whose entire world ends overnight. Her expressive face carries a host of confused feelings which shift and reform across her like a human kaleidoscope. Stéph’s vulnerability is married with a great strength of character, but Cotillard avoids many of the clichés of movie paraplegics by making her a woman who adapts without anger to her new condition. Instead, after overcoming depression, Stéph is looking actively (and with a curiosity) for something new to fill her life with.

Cotillard is so wonderful in the role, it’s very easy to overlook Schoenaerts’ skilful underplaying and Brandoish physical mastery. Ali is, I’ve got to be honest, a hard character to like – selfish, childish, in many ways thoughtless, blunt and fixated on himself. He’s also a terrible dad. Not malicious or cruel, just easily bored and frustrated with his kid. This frustration appears with anyone who doesn’t react the way he wants – “You’re so annoying!” he whines at both Stéph and Sam. Despite this, Schoenaerts’ is the heart of the movie. The film is his story, and he makes a difficult character engaging enough to carry the audience with him.

Rust and Bone is a film constructed around brilliant scenes and striking moments. In a wonderful sequence, Stéph repeats the arm signals she used to train the whales: at first she seems sad, then a warmth of enjoyment crosses her face. It’s the prompt for her to revisit the zoo, but the visit seems bittersweet: we see hugs with her friends, but Audiad cuts out the dialogue, adding to Cotillard’s own confused feelings about her return. Later she visits the whale that crippled her. Her mood here (with the camera to her back) is hard to read – is she forgiving the whale? Is she saying goodbye to this part of her life? Moments like this work so well because of the brilliance and humanity of the performances of both leads and Audiad’s patience and control as a filmmaker.

Audiad packs this beautiful film with moments like this. I particularly liked the bookend images he uses for each act. Each sets up the act thematically, from a bloodied tooth spinning on a pavement to the cover of a transit van flapping in motion. Audiad bathes the film in a series of cool blue colours, interspersed with flashes of light at moments of suggested revelation. He also has the discipline not to belabour the points of scenes or hammer home the feelings of characters (sometimes leaving you wanting more definition for the emotions they experience).

For a film immersed (to a certain degree) in a social realist world, there are odd gaps in logic: after throwing Ali out of her home (at gun point!) over his serial disregard for Sam, his indirect responsibility for her losing her job and his stroppy temper, would Anna really happily allow Sam to visit him a few months later? The disappearance of Stéph for much of the final reel of the film also pulls the focus from the central relationship and makes the final ending both rather sudden and slightly pat, out of step with the rest of the movie.

Audiad does bring a degree of engaging ambiguity to the story. The relationship between Ali and Stéph is intriguingly hard to define. She seems drawn to him for his lack of guile and his treatment of her disability with a matter-of-factness free of pity or embarrassment (qualities that linger around many of her other interactions). However, shifts in her character over the course of the film are deliberately kept low-key and open-ended, allowing moments where she surprises herself and the audience with the strength of her feeling. Similarly, the lack of depth in Ali’s personality makes his emotional development halting and discordant – he is attracted to her physically, but which qualities in her cause those feelings to deepen? It’s not immediately clear watching it – and I suspect many viewers would have different opinions from watching this curiously inscrutable film.

It’s a thoughtful film, but somehow never quite as moving as you expect. I think a lot of your connection with it depends on how much you feel Ali deserves redemption, or if you can forgive the constant stream of selfish and thoughtless things he does. I’m not quite sure I did. Similarly Stéph remains, for all the expressive humanity Cotillard brings to her, strangely unknowable.

That’s partly the problem with the film. Despite its beauty, it’s a little too enigmatic to be completely engaging. Wonderfully shot, and strangely haunting as it is, I think this is one every viewer will have a personal reaction to. I can imagine many would be deeply moved by its blue-tinted mystery and fragile dissection of damaged souls. For me it didn’t quite have the impact I think the film needs, and I didn’t feel this love story quite coalesced into a something truly profound in itself. It’s a beautifully made and intelligent film but not one I fell in love with – though I can imagine many people have.
Email ThisBlogThis!Share to TwitterShare to FacebookShare to Pinterest
Labels: 2012, Disability films, French cinema, Jacques Audiad, Marion Cotillard, Matthias Schoenaerts, Romance films