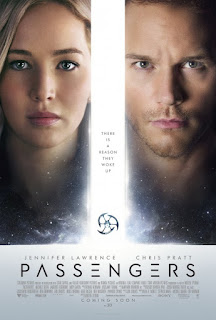 The Avalon is a spaceship carrying over 5,000 passengers and crew to a new planet for resettlement. With the flight due to last 120 years, everyone is in suspended animation. After an accident, passenger Jim Preston (Chris Pratt) is woken 90 years early. Trapped on the ship, unable to return to cyrosleep or change the direction of the ship, and with the round-trip time for messages to Earth being 76 years, Jim faces living the rest of his life alone on a spaceship. After over a year of isolation, with only android bartender Arthur (Michael Sheen) for company, Jim succumbs to temptation and wakes another passenger, Aurora (Jennifer Lawrence), for companionship. They fall in love over time – but how will Aurora react when she finds out the truth?

Passengers was a film that received a negative reaction perhaps because it managed to successfully not spoiler its plot in advance. While the trailer seemed to promise this would combine mystery and romance in a space setting, it’s actually more about the effects of isolation and the moral quandary of relieving your own despair by placing someone else in the same position. While the film is never going to win awards for its exploration of psychosis, it certainly tries to tackle this idea and explain – but not excuse – why Jim takes the decision he does.

A lot of people felt this suggested Aurora effectively falls in love with her kidnapper-cum-stalker, and that Jim’s actions are glossed over. Well I’d argue against this. Firstly, the film never shirks the repercussions of Jim’s decisions – indeed that’s really what the film is about: can you forgive the unforgiveable? A large chunk of the film is a build up to Jim taking a decision he acknowledges is wrong, and feels tremendous guilt and shame about. The later section of the film revolves around the impact of this action coming to light. Discovery of the truth destroys Aurora and Jim’s relationship, and it’s uncertain for much of the rest of the film whether there will ever be any forgiveness for Jim. If the film had shelved the issue, or Jim had been forgiven within minutes of screentime, that would be another question.

Secondly, the film works hard to show the savage psychological impact of complete isolation, and (after a year of this) the dangerous temptation of having a companion a push of a button away. Jim is clearly not in his right mind when he makes his decision – and later when Aurora faces the prospect of similar isolation, she responds with similar despair. If there is a fault with this, it is that the film shies away from defining the time progression explicitly enough – and doesn’t quite have the courage to increase its timeline (imagine if Jim had been alone for 3-5 years rather than one. Imagine if Jim and Aurora had not spoken for 2-3 years rather than one etc. Straightaway, I think the actions in this film could have been more readily understood by people).

Thirdly, these questions of isolation and morality are not as black and white as your casual internet moaner would like. Trapped alone with no human interaction, with literally zero chance of being rescued, is a psychological situation it’s just impossible to comprehend. Expecting people to behave as they would normally is simply unreasonable. Jim and Aurora do not fall in love after the truth comes out – they fall in love well before this (sure Aurora doesn’t know what Jim has done, but her feelings for him are real) – so it becomes a question of forgiving someone you love who, in extraordinary circumstances, has done something they normally would never do.

As such, Passengers is actually the sort of film where it will benefit you to discover more about what the film is going to be about before you go into it (and how often do you hear that?). Because, once you know the sort of film you are going to get, it’s not that bad a film. It’s handling of these moral issues is, I’ll readily admit, not the most effective or thought provoking (and the lack of mention of it before the film’s release, and its slight fudging through the film, suggests the “suits” weren’t happy with it either) but at least this is a film with some ideas behind it. If it had really seized the effect of isolation as its theme, and really explored the moral issues behind Jim’s actions, it might well have avoided much of the criticism. But it does enough to make some of that criticism unfair.

Away from this main plot point, Passengers is an entertaining, high-budget, character piece. Whatever your view of the character, you can’t argue against Pratt’s charisma and wit as a performer and Lawrence is also good. It’s not their best work, but they make the relationship – with all its peaks and troughs – work, and it’s endearing or tense as required. Michael Sheen is also excellent as the humanish-but-not-human-enough android bartender. The design of the ship is imaginative and the film looks gorgeous. The second half of the film delivers a fine series of tense set-ups (even if many of them are echoes of things we have seen before), and Tyldum does well to ensure that the often swiftly changing mood of the film (despair-romance-anger-tension-danger-terror etc.) seems like a smooth progression rather than a jarring one.

Passengers doesn’t have the courage of its convictions to really explore its “Ben Gunn in Space” set-up, and much of the criticism of its plot stems from its not-completely-committed exploration of the effects of isolation. But, if you know what you are going to get, it’s an entertaining film.
Email ThisBlogThis!Share to TwitterShare to FacebookShare to Pinterest
Labels: 2016, Chris Pratt, Jennifer Lawrence, Laurence Fishburne, Michael Sheen, Morten Tyldum, Science fiction