Okay Kingsmen. I’ll hit a beat later on which explores a major problem I had with this movie, but let’s talk about the rest of the film first shall we? 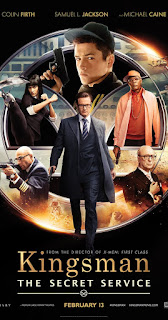 Firstly, Kingsmen is for the most part rather good fun (even if it is too long). It’s an excitable, teenage-focused riff on James Bond films that throws in ultra-violence and foul language alongside the overblown villains, insane plots and super-spy skills (all themselves amped up to 11). “Eggsy” (Taron Egerton) is a drifting, working-class young man from a council estate who is recruited as a candidate for super-secretive espionage firm “The Kingsmen” by Harry Hart (Colin Firth). Bucking against the system, Eggsy must prove himself against the privileged, public-school types he is competing against for a place. Meanwhile, Hart investigates sinister plans from tech billionaire Richmond Valentine (Samuel L. Jackson), aiming at reshaping the world to fit his own insane ideas.

Kingsmen basically has a teenage sensibility, with a “too cool for school” love for swearing and extreme (if comic book) violence. It deliberately sets itself out as a grimy, modernish, street version of Roger Moore’s Bond movies (at one point, Hart and Valentine even discuss “old spy films” – presumably copyright prevented a namecheck for Britain’s finest). The plot (and the cascade of exploding heads, satellites, sinister cross world signals, world leaders in danger etc.) all have the air of the sort of stupidity you found in Moonraker or The Spy Who Loved Me: the joke being that these fantastical elements have been mixed in with a sweary working-class hero and graphic violence. It has a pop-culture knowingness about it which it just (by the skin of its teeth) manages to prevent becoming too smug or self-satisfied.

This is partly because it is so well made. The violence and fighting are rather well done in their overblown, excessive excitement. Vaughan shoots it with a loving camera, revelling in the dynamism and speed of his agents (and their ruthless efficiency) in a way that’s very hard not to find entertaining. Some interesting music choices also add an ironic commentary to the killing. Vaughan’s also to be commended for spotting the potential for ass-kicking super-spy in Colin Firth (even if Firth himself probably plays the whole film marginally too seriously). The film's main set piece a jaw-droppingly violent but slickly made fight sequence in a church is probably the only thing it will be remembered for in ten years time - but is certainly worth remembering. The fighting is fun to watch – it’s a shame it’s not married with a wittier script, as if the wit of the visuals couldn’t be carried across to the dialogue in case we got bored.

Vaughan’s script also wants to fight the corner of the working class – although saying that, since every other working class character in the film except for Eggsy and his Mum are criminals, wannabe gangsters or thugs, it could just as well be fighting the corner of the “deserving poor”. Some rather obvious notes are hit during Eggsy’s training as he clashes with the chinless wonders that populate the Kingsmen candidates. It would perhaps work better if Eggsy himself was a more engaging and sympathetic lead – but as it is, the parts of the film without Firth (and Strong as a Scottish, grumpy Q) do drag a bit, which is unfortunate when your film is already over two hours long. It’s hardly Saturday Night, Sunday Morning but it pushes through its Pygmalion plot line reasonably well.

For the most part, Kingsmen is stupid, teenage fun. It takes place in a spoof James Bond world of huge bases in mountains and plans to destroy the world that can only be foiled by dynamic acrobatic fighting. If you were a male teenager watching this it would probably be your favourite film ever. It’s probably a little too knowing and isn’t really as charming as it really needs to be to work really well, but it’s entertaining enough. I was happy to leave it like that. And then this happens quite late on in the film:

Now it’s important to remember when watching this, that the video contains all the interactions in the movie between these two characters. Now I suppose you could just say it’s a smutty joke that, like the rest of the movie, takes the elements of a Bond movie (“Keeping the British end up sir!”) and amps them up to 11. But it’s cruder and (in my opinion) too clumsy and sexist for that. Not only that, but it’s the sort of exploitative, sexualised rubbish that makes you suddenly address the entire film’s attitude towards women.

The film has five female speaking roles (at a push). Each of these roles fills a specific stereotyped, trope-based function. One is a victim in an abusive relationship (the mother). Another is a standard “hot action chick” (the villain’s henchperson). Another exists solely to die early on. The character in the clip only exists to provide the hero with anal sex as a reward. None of these characters serve any purpose in themselves, other than how they relate to the male characters of the movie. All of them to varying degrees require protection from a man, or exist purely to service his needs. The cliché of a physically-strong-but-still-really-hot woman being created in place of an actual character is so tired, I’ll just leave it here as I can’t be bothered to type up why this isn’t a good balance.

That leaves Roxy, Eggsy’s fellow candidate. On paper, Roxy is a strong female role – only of course she isn’t. There is the standard hand wave that she is “the best in the class” during training – but she’s also established as the only candidate to have a genuine fear (of heights) that she has to be coaxed through by the hero. Her role in the conclusion is conquering this phobia again. The subtle implication is that Eggsy to some degree sacrifices coming top of the class himself to support Roxy.

I’m sure this is all po-faced political correctness and I’m being the sort of humourless prig sitting among the “20% of offended people” Matthew Vaughn said should basically get a sense of humour. But I mean, come on. The last shot of the film is a woman’s naked bottom rearing towards the camera. And yes I know, I know, I know it’s all riffing on Bond films but at least there the heroine was a presence throughout the film. I actually would have much less of a problem if these two characters had spent at least some time throughout the film together – but jumping straight to anal sex? It’s too much. It also seems to be fighting battles of the 1960s. Overt class consciousness from the rich is terrible – but women? Nope they’re just there for the sexier times.