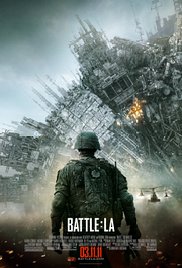 We are not alone, and the visitors do not come in peace. But then in films like this they rarely do. They don’t even want to be taken to our leaders. They just want to kill us. An alien invasion strikes, and Los Angeles is one of several cities on the frontline against the seemingly indestructible alien hordes. Staff Sgt. Michael Nantz (Aaron Eckhart), a veteran whom many blame for leading members of his platoon to their deaths on his last tour, is hurriedly reassigned to a platoon of fresh recruits and sent into the city to rescue a group of civilians. But they quickly find themselves trapped behind enemy lines, fighting a rear-guard action against the invaders.

Battle Los Angeles has received little love from the critics. It’s not hard to see why. The characters (such as they are) are a collection of ill-defined military types, who give voice only to the purest of clichés. Literally nothing in it is new or original, with Liebesman combining the offcuts of Saving Private Ryan, Black Hawk Down and District 9 into an alien urban shoot-‘em-up cocktail. The plot is so predictable it could be comfortably guessed in advance with only a brief description of the characters. Will Aaron Eckhart’s Distant-but-Dedicated-Haunted-Sergeant win the respect and love of his men? You betcha.

So why, despite this, did I actually quite enjoy this film? Possibly because it has no pretensions at all but solely sets out to entertain. It presents its clichés with such steel-jawed commitment, it makes them fairly entertaining. It has more heart in its affection for its staple characters than a host of other, bigger blockbusters and certainly more fun. It’s a short and high-energy ride. Despite its Michael Bay-ish, fetishistic love for the military, it’s not afraid to present the marines suffering from fear and anxiety. It’s a simple, unbloated story. Sure it’s not very good at all, but it’s not offensively bad, and catch it in the right mood and you’ll enjoy its corny heroics and “man on a mission” dynamic.

Part of this probably comes from Aaron Eckhart’s acting, which is at least several degrees better than the movie deserves. Replace him with an action lunk and it would slip into militaristic tedium, but Eckhart gives his performance a certain humanity – and inspires, I think, some decent, realistic work from his fellow actors. They more than service the “Men/Women gotta do” structure – and rather winningly the film shows all the characters as competent and all willing to go the distance to help each other.

So we get a decent, B-movie cutting of a modern war film, with the frame full of bangs, crashes and chaos. Sure, many of the characters remain indistinguishable and the plot is nothing at all to write home about, but there is an unabashed, unpretentious simplicity about the film I found strangely winning. Liebesman is no artist, but he is a solid craftsman and while he lacks any originality, he does have a schlocky sense of fun that really works here.

It’s not fit to lace the boots of any of the films it’s ripping off (you can chuck in Independence Day, Aliens and almost any war film made this century) but it’s perfectly content with being a bootroom reserve. It wants to entertain you: sit back and let it do so and it probably will. Critical thinking off!
Email ThisBlogThis!Share to TwitterShare to FacebookShare to Pinterest
Labels: 2011, Aaron Eckhart, Bridget Moynahan, Jonathan Liebesman, Michael Pena, Michelle Rodriguez, Science fiction, War film