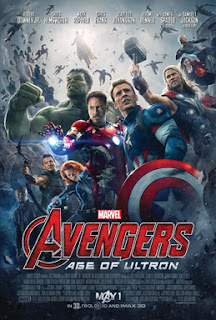 The Marvel Cinematic Universe: with the wrong director, it can be top a heavy mess, but Whedon showed with the first Avengers film that the right writer/director can weave the competing plotlines into a story that win overs an audience and leave them thrilled and entertained. His problem here was repeating that trick with the sequel.

After (it seems) finally defeating HYDRA, the Avengers relax at last – little knowing that Tony Stark (Robert Downey Jnr) is using multi-film-macguffin Loki’s staff to explore the possibility of creating an intelligent army of robots to defend the Earth. Instead, he creates Ultron (James Spader), a deeply flawed robotic version of his own personality, who grows to believe the best way to save the world is to wipe out mankind. Time for the Avengers to saddle up once more!

The greatest nemesis the Avengers faced here was that the first of these superhero smackdown films (2011’s Avengers Assemble) was far better than anyone had a right to expect. It was witty and had a plausible script, a very good villain in Tom Hiddleston (much missed here), and a winning structure that saw our heroes initially far apart and later drawn together into a family. On top of that, it gave all the jaw-dropping action and geeky thrills of watching iconic characters fighting together (in every sense of the word) that the fans expected. It worked so well that, consciously or not, Whedon ended up imitating it its structure here.

Both films open with a piece of shady alien tech: it’s stolen, and our heroes’ noble intentions for its use which   backfire. The villain is an outcast with a personal (familial) connection to one of our heroes (Ultron is, to all intents and purposes, Stark’s son). A first attempt to take on the villains ends in chaos as no-one works together, leaving the gang disheartened. Hulk is unleashed, causes chaos and needs to be restrained. A pep talk from Fury perks the gang back up. They head back into a battle over a city, against overwhelming odds, where they finally work together and turn a weapon of mass destruction into their salvation. With some small thematic twists and some adjustments to the plot they are fundamentally the same movie.

This might be connected to the greater studio interference Whedon dealt with. This conflict of visions results in a wonky balance between pay-off from past films and build up to future ones, and several plot lines being poorly developed. Most obviously most of Thor’s sub-plot ended-up on the cutting room floor. What was meant to be a series of revelations about infinity stones turns into essentially Chris Hemsworth sitting in a puddle. Whedon confirmed that the studio instructed he delete either this sequence or the sequence set at Barton’s log cabin (the emotional heart of the movie) so it’s not surprising that this paid the price. Needless to say, not a frame of the terrifically dull and overextended Iron Man vs. Hulk battle was allowed to hit the cutting room floor.

This confused cutting down of ideas is present throughout the movie. Villain Strucker, introduced with fanfare at the end of the last movie, is unceremoniously bumped off off-screen. Andy Serkis pops up to serve as an introduction to a future movie. The creation of Paul Bettany’s Vision is only vaguely explained. Ultron is never really given time (despite a pitch perfect performance of cold smarm from James Spader) for his plans to fall into shape, or for the audience to really understand him as a character. A backstory for Natasha is fitfully sketched out – but with hardly any time to explore it, the final product was so clumsily done that the film drew heavy (unfairly personal) criticism from the Twitterati, claiming Whedon was denouncing any woman choosing not to have children (“I’m a monster” says Natasha remembering her brutal education, which included GBH, murder and her voluntary sterilisation). He clearly isn’t, but as the plotline is rushed, it becomes easier to read an unintended message in it.

The area Whedon does handle well is juggling the huge number of characters he needs to keep tabs on at any one time – with careful plotting and some decent, fleet-footed scripting, he manages to allow each of the heroes a moment in the sun and a chance for the actors to breathe and perform. Those moments where the film takes five and doesn’t worry about the explosions and comic lore are the ones that work best – and also, perhaps, the ones most warmly embraced by the fans (never the best judges of what they think they will like – in advance they would probably have named the bland Iron Man-Hulk battle as the movie’s big sequence).

There’s a reason why most people would probably remember sequences like the party scene, where our heroes playfully take it in turns to lift Thor’s hammer: they feel real and they deal with emotions and friendships that we can understand and relate to, in a way we can’t with a giant robot man hitting a big green guy for no real eason (can you tell I didn’t like that bit?). It’s why the sequence Whedon fought so hard to keep in the film – Barton’s log cabin – feels genuinely rather sweet and moving. These are sequences where our characters behave like human beings, and they are the sequences that make us connect with the film.

Anyway take a look at these two scenes - which is more interesting and engaging? Make up your own mind!

The best Marvel films have always had an eye for the incongruous insertion of our heroes into a real world. And by placing Barton (an empathetic Jeremy Renner) front and centre as the moral cornerstone of the film, contrasting his (albeit well-trained) normality against the Gods he fights with, Whedon allows elements of relatability to anchor the film. Renner makes an awful lot of Barton’s wistful longing for something away from Avenging, while his relationship with his wife (who “fully supports your Avenging”) is one of the first relationships in these films that feels like it could be from a regular movie.

It’s strengths like this that Whedon brings to these films. It’s not directorial vision – at heart Whedon is quite a televisual director, using simple camera set-ups without much visual flair. The action the film provides is entertaining enough, but in truth we’ve seen all this super action before, and few of the set pieces are really memorable. Even a few days away I’m struggling to remember them all. Which is not to say they are badly staged at all – they’re just nothing new or special, and in many ways just higher budget developments of things from the first film. Whedon’s real visual strength is in his instinct for a comic beat or sight gag – and the film delivers several of these.

Whedon also crucially forced through (against studio objections) the death of Quicksilver. Marvel strongly urged a cop-out final shot of Quicksilver either in a hospital bed or in recuperation, but Whedon wisely stuck to his guns. It was an important struggle, as it forces a sense of peril into this world and gives the viewer the sense that sometimes things might not always turn out well. This is particularly important, since Stark’s entire plot about his fears would make no sense in a world without stakes or consequences. It also allows Whedon to do some very neat audience misdirection with Barton – how many of us, watching Barton solemnly promise his wife that this will be ‘one last mission’, were expecting him to bite the big one later in the film?

Avengers: Age of Ultron is a compromised film, but still a decent one. It’s not in the top five Marvel films, let alone the top five superhero films, but it’s entertaining, has some decent action – and, above all, Whedon manages to put a bit of heart in heart, enough for us to care about the characters. It’s this factor so many of these films miss out on – and it’s a reason that, while Age of Ultron is flawed, it’s not fatally so, and will continue to entertain for a good many years yet.
Email ThisBlogThis!Share to TwitterShare to FacebookShare to Pinterest
Labels: 2015, Chris Evans, Chris Hemsworth, Comic books, James Spader, Jeremy Renner, Joss Whedon, Mark Ruffalo, Marvel Franchise, Paul Bettany, Robert Downey Jnr, Samuel L. Jackson, Scarlett Johansson