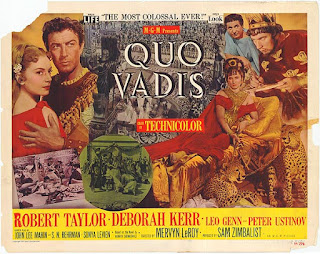 In the 1950s, epic films were the way for the movie studios to defeat the onslaught of television. What better way to best the creeping presence of the small screen in every home than offering more action, sets, crowds and colour than could ever be squeezed into that small box in the corner of the room? Quo Vadis was the first film that started a wave.

Returning to Rome after years on campaign, Marcus Vinicius (Robert Taylor) falls in love with a Christian hostage, Lygia (Deborah Kerr). Gifted Lygia as a reward by the decadent Emperor Nero (Peter Ustinov), Marcus slowly becomes fascinated by her religion – and more aware of the insanity of Nero. Petronius (Leo Genn), Marcus’ uncle and Nero’s cynical retainer who hides his barbs under double-edged flattery, unwittingly plants in the Emperor’s mind the plan for a Great Fire in Rome. After the mob reacts with fury, Nero kicks off a persecution of Christians that will end in slaughter in the arena…

There is a charming stiffness to some of this film which actually makes it rather endearing. Like many films that followed it, this balances a po-faced reverence for Christian history with a lascivious delight in sex, destruction and violence. This means the audience can be thrilled by Rome burning, entertained by Nero’s decadence, watch Christians mauled by Lions and burned alive – while also being comforted by the triumph of good-old fashioned Christian values and persuaded the film has some sort of higher purpose because it ties everything up with a nice faith-shaped bow.

Of course this all looks rather dated today, but back in 1951 this was the studio’s most successful film since Gone with the Wind and the biggest hit of the year: it started a nearly 15-year cycle of similarly themed religious epics. The money has clearly been chucked at the screen – the sets are huge, the casts sweeping, the staging of the Roman fires and Christian sacrifices very ambitiously put together. Perhaps the only surprise is that the lush, attractive cinematography isn’t in wide-screen – this was the last film of this kind to not be filmed in the widest lens available.

Despite its nearly three-hour run time, this is quite an entertaining story, laced with enough real history to make it all convincing (even if it telescopes the last few years of Nero’s reign into what seems like a week or so). Despite this, the storytelling does feel dated at times as we get bogged down in back and forth about Christianity (told with an intense seriousness by the actors, mixed with long-distance-stares type performances), and the homespun simplicity of its message lacks the shades of grey we’d expect today (as well as being a little dull) but it just about holds together.

The main problem is the lead performers. Robert Taylor is an actor almost totally forgotten today – and it’s not difficult to see why here. Not only does he speak with the flattened mid-Atlantic vowels recognisible from American leads in historical films from this era (the jarring mixture of accents in the film is odd to hear) but he is an uncharismatic, wooden performer sorely lacking the power a Charlton Heston would have brought to this. Marry that up with his character being a dull chauvinist and you’ve got a bad lead to root for. The relationship between him and Deborah Kerr’s (equally dull) Christian hostage is based on a terminally dated, borderline abusive, set-up: he kidnaps her from her home and wants her to change her faith, she won’t but never mind she loves him anyway without condition and surely her love will make him a good man, right!

Despite the efforts of the leads and some decent supporting actors (Finlay Currie in particular makes a very worthy Peter) the Christian story never really picks up. There are some nice visual flourishes – the recreation of some Renaissance paintings is well-done, and the stark image of Peter crucified is striking – but the Christian story isn’t what anyone will remember from this film. It’s all about the corrupt Romans.

Not only do they have the best lines and all the best scenes, but in Leo Genn and Peter Ustinov they also have the only actors who perhaps seem to realise they are not in a work of art, but a campy popcorn epic. Both actors give wonderfully complementary performances. Genn’s dry wit as the cynical Petronius (whose every line has a cutting double meaning) underpins his wry social commentator to fantastic effect, delivering many of the films laugh-out loud moments. He elevates many of the best lines in a dry but educated script.

Genn’s low-key performance also brilliantly contrasts with Ustinov’s extravagance as Nero, making the emperor a sort-of sadistic Frankie Howerd. Ustinov has enormous fun in the role, cheerfully going up and over the top with Nero’s man-child depravity, bordering on vulnerability and a needy desire to be liked and respected by the people and his underlings. Depictions of his singing are hilarious, his petulant sulking extremely funny. Yes, it’s an absurd performance – more a comic sketch almost – but it somehow works because (a) everything else in the film is so serious and (b) Genn’s world-weary cynicism anchors the character for the first two-thirds of the film, giving Ustinov much freer reign to go over the top.

So it’s all about the baddies – as was often the way with films of this era. You’ll remember the scenes of Nero holding court, and the archly written dialogue between Petronius and Nero. Ustinov and Genn are, in very different ways, terrifically entertaining (both received Oscar nominations). The Christian message of the film is on-the-nose (to say the least), and the lead actors are more like kindling for the Great Fire than actual characters. It’s a strange film, at times a bloated far-too-serious religious epic, at others a campy tragi-comedy with a dry wit. Yes it’s dated and far from perfect, but it’s also strangely entertaining and even a little compelling.
Email ThisBlogThis!Share to TwitterShare to FacebookShare to Pinterest
Labels: 1951, Christian movies, Deborah Kerr, Felix Aylmer, Finlay Currie, Historical epics, Leo Genn, Mervyn LeRoy, Patricia Laffan, Peter Ustinov, Robert Taylor, Roman films