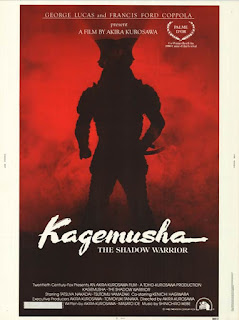 In his late career, Kurosawa made two epic “samurai” films, both sweeping broad canvas stories, crammed with epic visuals and tackling big themes. Kagemusha was the first of these – and Kurosawa himself claimed that the film was a dry run for his real aim: to make an epic Japan-set version of King Lear, which would become Ran. How does it hold up as film in itself?

Kagemusha means Shadow Warrior, and the film follows the life of a convicted criminal (Nakada) saved from crucifixion because of his uncanny resemblance to warlord Shingen (also Nadada). When Shingen is mortally wounded on campaign, the Kagemusha is recruited to pretend to be the warlord, to guarantee the peace and security of the Takeda tribe – whose enemies are kept in check by their fear of Shingen’s reputation. The Kagemusha struggles at first to fill the role, but gradually becomes more and more consumed by the identity of the warlord.

Kagemusha is a beautiful film to look at. It’s totally visually stunning. Kurosawa had spent years planning the film, struggling to raise the cash, he had even attempted suicide when it looked like he would never make another film again. Kurosawa had painted many of the scenes in advance, and his film captures this effect brilliantly in a swirling, breathtaking display of colour and imagery.

Battle scenes take place against blood red or pitch black skies. Armies march in silhouette past a burning sun. The colours of the sects of the Takeda army contrast and dance together. Foliage and bodies intermingle on deserted battlefields, with the camera taking in the destruction of battles with a cool, imposing stillness. A marvellous tracking shot early in the film follows a soldier running through a sleeping army in a castle, each group of soldiers waking and rising behind him as he proceed. Even the still (one shot held for seven minutes) opening shot is brilliantly framed and strangely compelling.

The final battle sequences have a strange, dream-like quality. Kurosawa films charging horses and men, gunshots, but no coming together of these things – we see waves of men going forward, see the guns firing, cut to the shocked reactions of the Takeda generals – we never see men mown down. The imagination alone presents what the generals are seeing – and makes us share their helpless horror. The final image of a body floating past Shingen’s personal banner, abandoned in a blood-stained lake, as the camera pans up and away is brilliant – hammering home the tragic loss of lives for the hubris and pride of a clan leader.

Of course, the most extraordinary use of colour is the Kagemusha’s dream, where he sees himself chased by the embalmed corpse of Shingen. The dream takes place in an explosion of painterly colours, a huge backdrop completely unrelated to anything real. This really ties into your unworldly memory of dreams – while Shingen’s relentless movement forward and his meaningless, unclear emotions (is he angry? Is he looking to take possession of the Kagemusha?) have the terror of a nightmare. The scene ends with the Kagemusha trapped in a pool of water, the motions of the waves breaking his reflection, a neat commentary on his own lack of identity. You’ve not really seen anything like it before.

In terms of storytelling, Kurosawa also uses some interesting techniques. I was surprised how many key events happen off-screen. Along with the two major battles (the one described above and the one fought under the Kagemusha’s “leadership”, which occurs mostly at night in confusion a distance away) we never see the Kagemusha’s training, Shingen being wounded (instead we see a sniper tell his master how he did it), never see the Kagemusha’s ill-fated attempt to ride a horse. Time seems to slide unclearly throughout the film – years seem to go by in minutes. The whole structure of the film flows in slight fits and starts – it feels rather like (guess what!) a dream, where the logic of events and time never quite holds together. Perhaps fitting in with Kurosawa’s love of visual language, it’s like looking at a series of canvasses by a master-painter – a series of snapshots or moments, or comments on moments, with the viewer left to fill in the gaps.

The film’s visuals are its real strength, but it touches on questions of identity and of leadership. As the Kagemusha, Nakada’s acting style has much of the expressionistic wildness of many of Kurosawa’s leading men, but married with a subtler quietness, making the Kagemusha a lost, gentler soul struggling to define himself within the role of Shingen. Nakada’s Kagemusha is a conflicted contrast to the ramrod certainty of his Shingen – a humanist, who grows to love his position – who perhaps even grows to believe he is Shingen – but has an ease with Shingen’s grandson the warlord never had (“He’s not so scary now!” the boy exclaims – and he is the only character who suspects a change). Is he a better man than the warlord but a worse leader? When unmasked, does he haunt the court because he has grown to care or because he can’t let go of the illusion of being Shingen?

Kurosawa also explores the Kagemusha’s success as Shingen – expressly linked to his ability to voice key slogans with commitment (“The mountain does not move!”) and sit calmly during battle. Kurosawa seems to be criticising implicitly the deference inherent in much of Japan’s past. These soldiers are devoted to the Kagemusha, but he says and does nothing. When revealed, they reject the same man totally and instead follow with the same dedication the orders of Shingen’s inadequate son (many even while believing it will doom them). Identity is a theme we cling to in the West, but I think for Kurosawa it’s the blankness of our leaders that interests him – the idea that we follow people because of what they represent, rather than what they necessarily are. It’s an idea that feels subservient to the mood of the film, but it’s there.

Kagemusha is a film of wonderful visual style and accomplished cinematic grace. However, the main blockage to calling it a masterpiece (as opposed to just a very, very good movie) is the slight sense of intellectual emptiness at its core. Despite touching some of the monumental themes I’ve mentioned, I’m not sure the film really has that much to say about any of them in. Questions of personal identity and the function of leaders in our society are skirted around but never truly tackled. Considering the epic runtime of the film, its story and ideas are surprisingly simple and transparent, its focus split between those and the inspired visuals. To be fair, Kurosawa never lectures us, which is a comforting change from many mundane filmmakers, but he also doesn’t strike me as having much original to say on his themes – or that he aspires to do so.

That’s always the clash of priorities with Kurosawa: he is at heart a painter and a visualist rather than an analyst, a director telling large stories in broad, beautiful brushstrokes. The Kagemusha always remains a cipher: of course this is part of the point, but the character’s internal struggle and clash still seem rather glossed over, as if mentioning them was the same as actually exploring them. Some of this is intentional, and I suppose could say the film is inviting us to reach our own conclusions without prompting, but it’s hard to shake the feeling that this is a film that hangs out with ideas rather than really getting to grips with them.

Kagemusha, like Rashomon, is a film I’ve have been hard on – and Kurosawa is a director I expect so much from, because he is so overwhelmingly talented. Visually he is up there with Lean, but I feel Lean gets a better balance of depth and images. Kurosawa’s visual language is sublime, but this film is also strangely empty in places, a mighty epic and beautiful piece of cinema that says things but isn’t really about things. I don’t feel it truly explores its points, or gives us anything to really think about after.

Saying that, this is a vital and impressive piece of cinema and one of the most beautiful films you are going to see. Kurosawa is not the most profound film maker, but he is more than thoughtful enough compared to most and while he doesn’t claim the potential of some of his ideas, what he offers us is a true artist’s vision, a graceful mastery of the camera and enough feeling to immerse you in the story. He also – and I feel sorry for not dwelling on this earlier – brings out some wonderful performances from his actors: Nakada is superb and there is wonderful work from Yamazaki, Hagiwara, and in particular Ōtaki who is marvellously genial but imposing as Shingen’s closest general. Kagemusha isn’t his masterpiece, but for the vast majority of film-makers it would be.
Email ThisBlogThis!Share to TwitterShare to FacebookShare to Pinterest
Labels: 1980, Akira Kurosawa, Historical epics, Japanese cinema, Tatsuya Nakadi