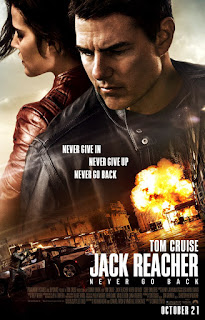 Titling a sequel to any film Never Go Back is a real hostage to fortune. It’s not a great surprise that a quick internet search for reviews of this film throws up a plethora of puns around the film’s subtitle. It’s pretty obvious: but considering the general meh nature of this film, it’s also kinda fair.

Jack Reacher (Tom Cruise) travels back to Washington DC to visit Major Susan Turner (Cobie Smulders), a Military Police officer who has helped him with a number of problems in the past. He arrives, however, to find her under arrest for espionage – and after he starts asking questions, he quickly joins her in lock-up, under arrest for murder. Busting out of prison, they go on the run together to try and find out who has framed them.

Now I loved the first Jack Reacher film: I’ve seen it three times now and it has a brilliant combination of well-cut action sequences, witty lines, an involving plot and some interesting eccentric fringe characters (not least Werner Herzog’s Russian mobster mastermind), which fleshed the movie out into an entertainingly different man-gotta-do movie. This sequel shakes up the formula – but in doing so makes itself much more of an identikit movie, full of tropes we’ve seen before.

For starters, the main appeal of the first Reacher film was the character himself: a loner who plays by his own rules, operating like some sort of master-less samurai, was interestingly different; it was hard to predict how he might react in different situations. Here, teaming him up with Turner (good as Smulders is in the role) and a character who may-or-may-not-be his daughter turns Reacher into just another leg of a mismatched trio, an odd bunch on the run. Cruise tackles well Reacher’s conflicted reactions to taking on a father-child bond that has never crossed his mind before, but adding this parental element to the mix makes the movie start to feel like a high-class Taken reprise.

Secondly, Zwick’s direction doesn’t have the zing that the rather dry and uninvolving plot needs to bring it to life. There is very little of interest in the script, and no memorable lines at all. The best scene in the film is Reacher’s introduction – practically the only scene that captures the character’s slightly cocky defiance of authority, his seemingly omniscient awareness of how events will unfold and his simmering potential for violence coupled with a strong moral code. The storyline that built up to that opening scene sounds really interesting: I wish the film had been about that. No scene after that point really comes to life again. Zwick’s action directing is perfunctory and he can’t add the visual wit that Christopher McQuarrie introduced to such great effect in the first film.

Thirdly the story is just plain not that interesting. The conspiracy is hard to fathom (or care about) and the villains are poorly defined ciphers. In fact, outside of Smulders and Cruise, not a single actor makes an impression in this film: each supporting character is little more than a plot device, sketched with broad strokes. The family dynamic between Reacher-Turner-Dutton feels rather old-hat and robs us of Reacher’s most unique asset as a character – all part of turning the film into another run-of-the-mill thriller. For a fourth or fifth film in the series, doing something very different with the character might have worked: here we still want to explore the loner.

That’s really harsh: it’s not a bad film, just a disappointingly average one. There are some decent scenes and some grins. Cruise and Smulders give good performances. I’m glad they made a Reacher sequel. I just wish it had been a better one. I’m sorry, I can’t resist – this is one film that you will probably Never Go Back to.
Email ThisBlogThis!Share to TwitterShare to FacebookShare to Pinterest
Labels: 2016, Cobie Smulders, Edward Zwick, Thrillers, Tom Cruise