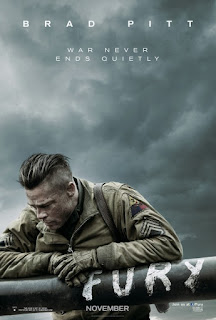 The Second World War. How many times has it been placed on screen? And  how hard is it now to tell an original story about the conflict? This film proves it is, in fact, very hard indeed. Norman (Logan Lerman) is a young clerk sent to join a tank crew as a replacement machine gunner. He joins the crew of the tank Fury led by “Wardaddy” (Brad Pitt), a famed veteran whose crew are a tightly loyal crew of old hands: Logan’s reluctance to fight quickly makes him a target for anger. But when they are sent on a mission to hold a crossroads, will he prove himself?

There isn’t much original in this rather dull remix of elements from other war films – most notably The Dirty Dozen, Saving Private Ryan and elements of Inglorious Basterds, with Pitt in particular essentially offering a second version of the same Nazi-hating wild guy he played in Tarantino’s film. As a result, there is almost nothing in here that you haven’t seen in several – often much better – Second World War films before. Nothing seems fresh, nothing seems original and as a result nothing is ever particularly exciting or engaging.

Added to that, this “coming of age in a time of war” drama is undermined by the fact that none of its characters are particularly sympathetic, engaging or likeable. The film wants to partly show that constant conflict and war has dehumanised its principle characters– and we see the effect it starts to have on  young Norman – but that doesn’t change the fact that the tank crew we are saddled with for the course of the movie are boorish, unpleasant, swaggering, bullying assholes. The small amount of shading added to them doesn’t change that, and it’s pretty hard to feel anything at all when they start getting killed off late in the movie.

The final confrontation scene also flies in the face of logic – one broken-down tank takes on 200 German soldiers? Why don’t the troops outflank it? More to the point, as everyone involved acknowledges the war is nearly over, why bother with the risk – what is at stake? Why the kamakazi final stand? Never are the stakes clearly explained – instead it’s just lazy “men gotta do” action rubbish. Ayer may feel that he making a point with Norman’s character about innocence shattered by conflict, but it’s a pretty murky point that's been made many, many, many times before, and I don’t think he is swift in criticising or condemning some of the terrible things Wardaddy and his soldiers do in this film, despite their undoubted efficiency at combat. But like many films of this genre, slap the label Nazi or SS on anyone and it justifies any level of violence directed at them.

I’ll give the film a nod for some good photography and some impressive sound and visual effects. In terms of showing tank warfare, this is pretty impressive, and the deadly firepower of these weapons is brought very well to life. The characters may not be engaging, but this is decently acted – even if many of the scenes rely too heavily on grandstanding performing. Brad Pitt is good enough to even sway some interest in a 2D character he could play in his sleep: quieter scenes of reflection allow us to think that there is more to Wardaddy than a love of fighting.