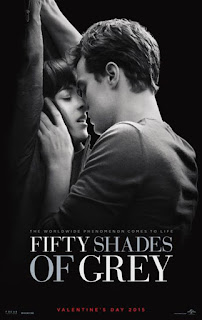 Anyway, it came at last (so to speak): the film of the book. With it came EL James’ atrocious dialogue (full disclosure here: I’ve not read the book, but I looked up some quotes and read the synopsis on Wikipedia, so I reckon that’s probably better than reading it), paper thin characters and event-less action. Along, of course, with the sex. Anastasia Steele (Dakota Johnson) is a young student who encounters Christian Grey (Jamie Dornan), a mysterious billionaire. He likes spanking. She’s never done anything down there (“You’re a virgin”, “yes”, “but you’ve done other stuff?” “no” “oh my god” – goes one classic exchange between the two). Bless, she doesn’t even know what a butt-plug is. I guess she will find out.

I’ll be blunt. This is possibly one of the worst, most offensive, horrible films I’ve ever seen. I’m actually rather angry I watched it. Nearly everything about it stinks: the acting and film-making craft are as vile, tasteless and revolting as the ideas behind it. First and foremost, Jamie Dornan honestly looks like he vomited with shame after completing every scene. Dakota Johnson does a reasonable job with a character who is as well-developed as the stains on Grey’s bedding, but since she is merely required to look alternately sad, timid or (god help us) “aroused” (expressions which bear a distinct resemblance to each other, mostly involving biting her lip and opening her eyes really wide beneath her “frumpy geek girl” fringe), she hardly needed to be much more than competent to bring this sad excuse for a protagonist to life. Ehle and Harden hopefully picked up big paycheques for selling their talents to this dreck.

The original author of the novels, EL James, had unprecedented creative control, and the tension between her demands for the film and the film-makers’ ideas is evident throughout. The film is a real hotch-potch: James had rejected one script by Patrick Marber (of Closer fame) for deviating too strongly from the book. That script presumably attracted Taylor-Johnson’s involvement as director – she wanted, it seemed, to make a serious relationship drama. EL James wanted an illustrated edition of her book. While I respect James’ insistence to get what she wrote on screen, I would also say she’s not a film-maker, and has no idea about what works on screen. What ends up here is a compromised mess – about half a Taylor-Johnson/Marber style “serious exploration of an unsuitable relationship” film, half James’ soft-porn spankathon shit.

The sex is one of the main problems with this film – there is nothing remotely enjoyable, titillating or even amusing about the joyless couplings in this film. Jamie Dornan looks like he’d rather be literally anywhere else during the sequences, a constant expression of embarrassment behind his eyes. The poor guy looks like he’s desperate to take Anastasia home to meet his mother. Both the sex and the spanking in this film are pretty tame, but he sets about both with a grim eyed determination, as if he was already thinking of getting back to his trailer and phoning his real life wife and kids. In fact, the film would make a perfect cold bath – I simply can’t imagine ever wanting to have sex again watching this film, let alone indulge in any of the “erotic” games it features, which it manages to make look as enticing as root canal.

The big thing missing from this film is any fun whatsoever. A large slice of the blame for this must go to Taylor-Johnson. I suspect she wanted to make a film that was a serious examination of relationships, and the unexpected dangers desire can lead us into. However, she was pushing against the source material (and the all-powerful author), and her efforts were always going to be doomed. This is taken from a book that is, to put it bluntly, a piece of sub-Cinderellesque shit with extra spanking. What it really needed was not an artistic approach, but more of the camp “I know this is rubbish, just enjoy it” direction – in other words, it needed an efficient (even knowing) hack director, not an artist at the helm.

By trying to look at the dynamics of power relationships in a serious way at least part of the time, Taylor-Johnson (assisted by Dornan’s fantastically awkward performance) manages to highlight what a humourless, manipulative, controlling wanker Christian Grey is. By any objective measures, he is clearly a controlling and abusive boyfriend. Filmed entirely seriously, with moody music in the background half the time and none of book-Anastasia’s laughably cheesy descriptions of the latest antics of her “inner goddess” (usually to be found dancing the hula or turning cartwheels), this film throws into sharp relief what is actually happening in this story: an experienced, controlling man finds a naïve, inexperienced younger woman and coerces her into servicing his desires. The “negotiation” talk is one of the most uncomfortable examples of this: “we can negotiate” says the man who holds all the cards, to the girl who doesn’t even know what she can or should ask for.

Throw in the fact that he is multi-billionaire who gets his rocks off by fucking his girlfriends the same way he (presumably) fucks his business rivals, only makes him seem even more of an unredeemable asshole. His ostentatious gifts of new cars, his controlling forbidding of Anastasia to drink on her nights out with friends, his insistence on coming to remove her from one of these nights out when she’s only met him twice and has not asked for his help or his presence, his demand for her to sign a contract, his following her to her parents’, his not taking no for an answer…  Need I go on? The more the film focuses on these darker sides of the relationship, the more you look at Grey less as a messed up Prince Charming, and more like an abusive predator.

Grey is also clearly purchasing his new part-time live-in mistress like a piece of meat, and he treats her like a piece of property throughout. Tragically (and I’m not sure the film realises this) Anastasia is so sweet and vulnerable she seems to think that she just has to accept all this spanking and rope game malarkey as just part and parcel of having a boyfriend (“Do we still get to go to the theatre” she rather sadly asks when enquiring into the new rules of their relationship). I don’t get overwhelmed with sympathy with her though: every hesitancy is overcome by a new extravagant display of Grey’s wealth. The film does build towards her walking away – but she hardly does this with any decisiveness. Despite the film’s best efforts, she in no way comes across as an equal partner or a strong character.

So the film’s serious tone is a major problem in that sense. It’s also a major problem as Taylor-Johnson just ends up turning this into a totally dull, lifeless film. Almost nothing happens in this film. Trivial events and dull conversations are interrupted occasionally by the actors rutting with all the passion of two people eating a microwave meal. The film’s sex scenes are, incidentally, totally unbalanced: throughout his session in the red room, we see endless shots of Johnson’s assets but Dornan politely keeps his jeans on almost throughout. The camera’s perfunctory, joyless efforts to capture Johnson’s nipples in every scene it can (never miss a chance to edge them in at the corner of a shot!) just builds this feeling of no-one enjoying their work, but shovelling onto the screen what the readers might want so they can all go home.

The only way this fucking piece of garbage could ever have really worked on the screen is if someone had basically accepted it for what it was: a steaming pile of manure written to titillate those scared of searching the Internet for real porn. If it had been treated like the ghastly, campy piece of crap it was, then the film itself could have been the ultimate “bad” film. But Taylor-Johnson’s attempt to create a serious relationship drama crashes up against EL James’ dire, pig-eared prose and depthless characters, and instead creates a film both tedious in the extreme and offensive.