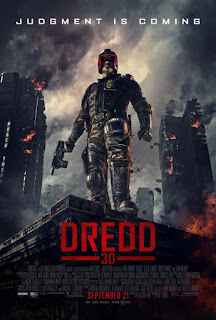 Dredd is the second attempt to bring the brutal post-apocalyptic lawman to the screen, after a disastrous 1990s version starring Sylvester Stallone. Famously, that film gained the undying enmity of the comic book fans by having Dredd remove his signature helmet (and show his face) at every opportunity. Here, Karl Urban dutifully keeps the helmet on at all times.

In a future USA, Mega-City One is a sprawling metropolis of 800 million residents and 17,000 crimes a day. To combat crimes, the Judges are a police force with the powers to sentence and execute criminals on the spot. Judge Dredd (Karl Urban) is the most feared and experienced Judge on their books, a man of rigid rules who sees the world in black and white. Given a new psychic recruit, Anderson (Olivia Thirlby), Dredd makes an arrest at Peach Trees, a 200-storey slum building ruled by brutal crime lord Ma-Ma (Lena Headey). After Dredd and Anderson arrest one of Ma-Ma’s key lieutenants, she locks down the building, isolates the Judges, and demands their execution by the residents.

Dredd is a super violent but entertaining siege movie, with the twist being that the siege involves the heroes being locked in with their opponents – the heroes trying first to get out, then to stop their enemies getting in. Now I know very little at all about the source material, but, unlike the Stallone film, this film succeeds as a Dredd movie by simply treating its events as a “regular episode” rather than a ground-shifting, world-at-stake mega-movie. As such, it can focus on the events that are relevant to the immediate, simple story and loosely sketch out the other elements of the future (enough to keep us interested and to understand the context). It focuses on a fast-paced, exciting story and enough character detail and interest to keep you involved.

The film is snappily directed by Travis with a decent, stripped down script from Alex Garland, and has a good performance at its centre from Karl Urban, who has the collaborative lack of ego to make Dredd, rather than his own performance, the centre of the story, . Urban also manages to make a character who is an imposing and lethal killing machine into someone we also respect for his adherence to a firm moral code. And he adds enough texture to the part to suggest a certain softening in his attitudes towards Anderson (a very effective Thrilby) across the course of the movie. Headey also makes a great enemy, a sort of Cersei Lannister on heroin and acid, a totally remorseless megalomanic.

The film packs a great deal of punch and its design is very impressive. The Peach Trees setting is an imposing vision of a crap-sack future, while also having a very clear navigation for the deadly game of cat-and-mouse Dredd and Anderson play throughout the film. The film doesn’t have much in the way of wit to it – the source material is apparently more satirical, not something that comes across here to be honest – but it does understand the rigidity and certainty of its lead character and it doesn’t flinch from the dark consequences of its hero’s actions.

I’m no expert on the original but this is rather a lot of simple, unchallenging fun that manages to swiftly establish characters – through neat writing and good acting – that make sense, are complex and feel very true to the tone of the source material. It’s violent and bloody, and yes it has many beats in it that are slightly predictable or twists on many similar “one man against an army” movies we’ve seen, but it has more than enough merit to be worth your time.
Email ThisBlogThis!Share to TwitterShare to FacebookShare to Pinterest
Labels: 2012, Alex Garland, Dystopia, Karl Urban, Lena Headey, Olivia Thirlby, Pete Travis, Science fiction