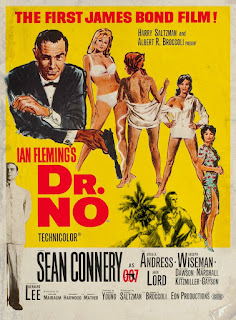 It’s hard to believe now, but there was a time when the launch of James Bond novel was nothing more than a little B-picture event – rather than the major cultural landmark it has now become. But James Bond started off as a slightly higher budget B-movie of a character largely unknown to those who don’t read spy fiction.

After the murder of a British agent in Jamaica, James Bond (Sean Connery) is sent to investigate. Arriving in Jamaica, Bond quickly finds himself the target of a series of increasingly outlandish attempts to take his life: from a fake embassy driver to a series of assassins pretending to be blind and a sinister geology professor. Eventually, Bond detects the hands (forgive the pun) of Dr No (Joseph Wiseman), who is experimenting with radioactivity on a nearby island.

What is striking is how much of the Bond-movie formula is in place here right from the start – or rather, how much the style and tone established here fitted so naturally with the source material and character, meaning it would be used repeatedly throughout the rest of the series. Most striking of course are the music cues, all perfect and immediately cool. Is it any wonder that no-one has felt the need to change the James Bond Theme since? But it’s not just that: Bond’s flirtation with Moneypenny and cheeky-protégé exchanges with M? Check. Exotic locales, car chases, shoot ups and wise cracks over dead bodies? Check. The villain being a suavely charming wannabe upper-class type with a creepy deformity, a vague plan and a ridiculously overblown layer? Check. Wave after wave of heavies attempting to bump Bond off with overblown schemes? Check. The villain monologing rather than killing Bond? Check. It’s all there – the formula was in place, and would remain for the next 60 years.

Of course, it probably wouldn’t have worked without getting the casting of Bond himself right – which they certainly did with Connery. Not exactly a conventional choice for a character Fleming imagined as a mixture of Noel Coward, Cary Grant, David Niven and Christopher Lee, Connery brought to it the earthy violence, the roughness and sense of danger that made you believe he could not only merrily kill a room full of goons, but that he would hardly break a sweat doing it. The film’s writers downplayed the self-doubt, anxiety and fear that Fleming’s book-Bond often displayed, repositioning the character as a serenely cool and charismatic superspy, with Connery granting him an additional charm and sex appeal all rooted in his charisma as a performer. He’s magnetic here – whippet thin, dryly deadpan and ruthlessly violent. He established completely the template the character would follow through the next five actors.

What’s interesting watching this film is how close it is to being a one-man movie cum character study. Bond’s principle love interest, Honey Ryder, doesn’t appear until half way through the film and Dr No himself doesn’t pop up until the final act. Felix Leiter has just a few bare scenes. Instead, the focus is front and centre on Bond himself, and Connery’s perfect mix of suave sophisticate and brutal remorseless brawler. The character’s comfort with sex and violence (often close together) is in every scene – Bond sleeps with at least four women, flirts with a couple more, ruthlessly offs a wave of heavies sent by No, and cold bloodedly guns down defenceless doofus Professor Dent. Perhaps fitting for a film that promoted itself as “the FIRST James Bond film”, it wants us to understand (and above all, enjoy the company of) this guy, with the hope that we will sign up for multiple movies to come (which of course we did).

As a standalone film, Doctor No makes a pretty good fist of things. Its plot avoids a clumsy “Bond: Origins” story, instead throwing us straight into events (despite being the first Bond film, it could basically be watched in any order with Connery’s other Bonds – only his first discovery of SPECTRE has any bearing on the timeline). Its plot is certainly a lot more stodgy and wordy than later films would be – but the balance is Bond actually gets to do quite a bit of investigating. The pace is kept up, even if (as noted) most of the film’s principle characters don’t appear until late in the film.

The rather low budget is clear in the rather rudimentary car chases (back screen projection ahoy!) and fights, which rely heavily on sped-up film to get their impact across. I suspect most of the money went on the glamourous Jamaican location, but that does look fantastic under Ted Moore’s photography.

The film does though have a certain mastery in its direction, not least in the introduction of its leading characters. The introduction of Bond himself (held off for the best part of 10 minutes) is a lovely example: a camera tracks into a casino, settling on a table before craning up to reveal the lady Bond is playing against. A medium shot of the same table: Bond’s hands can be seen but nothing else. The camera focuses on the lady again and tracks back over Bond’s shoulders – we see the outline of his neck. Several shots of his hands follow flipping over cards – finally he speaks (“I admire your courage Miss uh –“ being the character’s immortal first onscreen words). She retorts and then the camera finally jump cuts to Connery nonchantly lighting a cigarette with practised cool – while the Bond theme gently underplays, swelling throughout the rest of the scene. From here now we cut to Connery’s face every few seconds. It’s a masterful building of tension and aura. Similar skill is also of course shown in the later entrance of Ursula Andress’ Honey Ryder.

Dr No is an extremely enjoyable B-movie, which successfully sets up the tropes that would play out so well in future Bond movies. Ken Adams’ imposing set design for Dr No’s secret base set the tone for the sort of futuristic locations Bond would find himself in, and would only grow in imagination as the film series expanded. It’s not just the visuals – the tone of the series is pretty much there straight away, and if the plot is not always the most gripping and the action not always the most compelling, that would only develop as the series got more and more money pumped its way. Indeed the follow-up, From Russia with Love, would build perfectly on many of the concepts and ideas introduced in this film. Dr No is not in the top 10 best Bond films, but it continues to reward and entertain – and for starting such a huge ball rolling so confidently, it deserves plenty of praise.
Email ThisBlogThis!Share to TwitterShare to FacebookShare to Pinterest
Labels: 1962, James Bond, Joseph Wiseman, Sean Connery, Spy thrillers, Terence Young, Ursula Andress