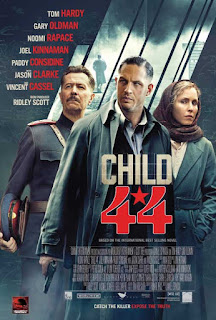 Adaptations of bestselling books are tricky things. Your source material already has a pre-existing fan base but you also need to bring new faces into the multiplex. Is that easy to do? Not always – and many films fail to strike a balance between telling the story for newcomers and satisfying the old fans. This is one of those failures.

Leo Demidov (Tom Hardy) is a war hero and NKVD officer in 1950s Stalinist Russia. Initially complacent and sure that he is a good man doing his best in the system, his life is shattered after his wife Raisa (Noomi Rapace) – a woman who secretly hates her husband – is maliciously reported as a traitor, and Leo refuses denounce her. Banished to the outbacks of Russia, Leo feels compelled to find some redemption by investigating a child murderer. But Stalin has ruled murder is a capitalist crime “impossible” in the paradise of Communist Russia, making it a crime the all-powerful state has decreed cannot exist.

It’s hard to put your finger exactly on why this film never comes to life. It ticks nearly all the boxes of the original book’s plot (it in fact changes the one part of the book I found a “shark jump”, the identify of the killer itself). It’s well shot. There are some very good actors in it. It’s a good story. But it just doesn’t work – you never really invest in it. Perhaps the problem is the film has to jettison the interior monologues of the characters, so we lose much of the context of the action.

The book’s strength was its exploration of the nature of investigating crime in Stalin’s Russia: where crimes only exist if the state agrees they can, where investigation is largely unnecessary as the perpetrator is always proclaimed at the start, where those investigating the crimes are constantly in fear of being denounced for failures (“if the man I follow escapes, I will be accused of working with him”). The film fails to get this Stalinist tension across, so is left with just the bare workings of the plot without the novel’s context, making it seem like a “murder of the week” TV movie.

The attempt to get all the plot ticked means many actors get wasted in heavily reduced parts. A particular victim is Gary Oldman, who can’t be on screen for more than 15 minutes, and switches from obstructive boss to confidante as the plot requires. For the leads, Hardy and Rapace give quality performances (Rapace in particular is very good), and I did like the way the film really explored how Raisa’s feelings for Leo change from disgust and fear towards true affection. But you never really feel or care for them as you should.

However, they, along with the rest of the cast, suffer from the decision to give all the actors thick Roosian acksents. Why was this decided? Not only does this make some lines hard to hear (particularly Hardy’s) and stifles variance in delivery, but there is no need for it. Every character is Russian. They are all talking Russian. It’s all set in Russia. Why not have them use non-strongly accented versions of their own voices? Do we really need thick Slavic vowels to remind us we are in Russia?

Child 44 is a disappointing film, and perhaps the worst thing about it is, if you watch it before reading the book, you’ll probably wonder what all the fuss was about. By largely failing to get across the full complexity, danger and madness of the Stalinist system, it reduces the book’s plot into something flimsy and everyday. The whole adaptation has almost completely missed the point of what made the book so different and compelling in the first place. By doing so it turns the story into something that feels much more derivative than it actually was.
Email ThisBlogThis!Share to TwitterShare to FacebookShare to Pinterest
Labels: 2014, Daniel Espinosa, Gary Oldman, Jason Clarke, Murder mystery, Noomi Rapace, Paddy Considine, Thrillers, Tom Hardy, Vincent Cassel