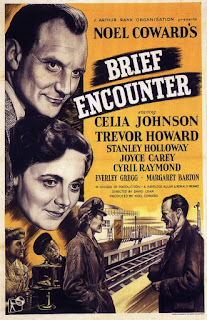 Brief Encounter is often hailed as one of the most romantic films ever made. This is astonishing really, as it’s actually a film about an affair where two married people with young families toy seriously with the idea of walking out on these families to run off together. Put like that, you can imagine thinking, how could I sympathise with this situation? The film’s magic is that you do.

Laura Jesson (Celia Johnson) is a middle-class woman, married to loving but dull husband Fred (Cyril Raymond) with two young children. Every Thursday, Laura travels to Milford for the day for shopping and a trip to the cinema. One day she meets Alec Harvey (Trevor Howard), a married doctor who works one day a week at the Milford hospital. Enjoying each other’s company they agree to meet again, but quickly find their ease and comfort with each other developing into a deeper relationship – with infidelity on the cards.

Brief Encounter in many ways gets close to a perfect film. Its impact on people seems to be pretty near to universal. Perhaps because the film speaks to a certain universal truth: who hasn’t, at some point in their life, found themselves attracted to someone they shouldn’t be, and who hasn’t been tempted at some point to throw their life up in the air and embrace something new and exciting? The film carefully presents these temptations in a totally non-judgemental and empathetic way, and acknowledges the romance and enticement of the forbidden.

The film also perfectly captures the magical discovery of falling in love, the tingling excitement of every second spent in the company of that new found love-interest. It’s there throughout Johnson and Howard’s interactions: their smiling eagerness, the way their eyes light up and body language opens out when they speak to each other (compare to how closed off they are when speaking to anyone else). There is a relaxed pleasure about it – an innocence and spring-time joy that makes you forget that this is a couple toying with shattering their families in a passionate affair. There is a reason the film is set in a train station – it has a transient, chance-meeting sense about it, with the station being a “neutral” ground far away from both characters’ homes where it is easier for them to pretend to be “other people” – it removes many of the possibilities for the film’s would-be affair to be perceived as sordid or wrong.

The plot also hinges effectively on fleeting moments of chance that cause either joy or pain (usually the latter). Most obviously we have Doll’s interruption of their final moments – enough to make any of us scream at the screen – but their very first meeting is caused by the random chance of a piece of grit flying up at the right place at the right time. The relationship is only unconsummated due to Alec’s friend returning to a flat early (and his sneering contempt for Harvey’s planned adultery is the only scene where a third party shatters the illusion of a perfect romance that could cause no harm to anyone). The lovers encounter friends and have to concoct unconvincing spur-of-the-moment reasons for why they’re together. It’s this constant feeling of chance and chaos around the edges of the drama that provides the sense of danger that keeps this relationship alive and empathetic.

Laura and Alec are grown-up and intelligent adults, aware of the consequences of their actions, and the film keeps this constantly at the forefront. Part of the reason we can “relax” into this would-be affair is that we have already seen at the start that the relationship will end, meaning we can simultaneously root for this meeting of hearts and minds, while knowing that no one (other than the couple themselves) will be hurt. Imagine if the film had opened with Fred’s tear-stained face? Would all the romantic boat rides and illicit kisses on a country bridge still have made us feel warmly towards Laura and Alec?

Watching this film again, I actually started to think about how Lean developed as a director from these smaller scale, script-led Coward films to the sweeping, grandiose epics that he is best remembered for today. In Brief Encounter his command of mise-en-scene is so complete – and in Celia Johnson he has such an expressive actor – that the dialogue in voiceover (for all of Johnson’s excellent delivery) often feels superfluous; it tells us nothing that simply looking at the picture hasn’t already communicated.

Look at the scene after Laura flees Alec’s borrowed apartment: Johnson’s stunned, panicked, guilty face is the camera’s focus, as we follow her, head down, moving fast through the streets without aim or direction, the score swelling behind her. Later she sits smoking on a park bench. Her conflicted emotions of guilt, shame and shock that she should do such a thing are clear, not just from the acting, but also the construction of the scene. Although the score helps, you could watch the scene silent and know exactly what was happening and what Laura was thinking about. But the film continues with Laura’s voiceover as she details everything her face is telling us. Take a look at the sequence here (64minutes and 42 seconds in):

Was it at points like this that Lean started to move towards his later films, where the language of cinema took the place of the language of speech? Later he would place so little information about the real Laurence of Arabia in that film’s script that nearly everything is interpreted from O’Toole’s expressive face. I think you can see the roots of it here – brilliant visual touches that capture the immediate intimacy between Alec and Laura, or the way the camera holds itself steadily on Laura while she prepares her evening make-up and calmly lies for the first time in her life to her husband. In the entire construction of this film, its detailed and perfectly paced building of a sense of Greek tragedy around a slim story, you see a master film-maker, a genius of visuals and compositions. You don’t need the extra explanation, it’s all there on the screen for us.

Camera choices are sublime: look at the staging of Alec/Laura’s final meeting: first time round, the camera moves lightly past them, focused on Holloway and Carey’s characters. Despite that, we get an overwhelming sense that something important is happening just out of shot – reinforced when Dolly interprets them. Flash forward to the end of the film, as the scene is restaged – now Dolly practically forces herself into the frame (in one great shot, the camera watches Alec leave through the door before Dolly literally walks in front of the shot to sit down at the table). The careful, comfortable composition of Alec and Laura sharing the frame together – and the way she never does so with her husband (until the very end of the film) alone tells us visually as much about the relationships as any dialogue could.

What is fascinating is that this is remembered by so many people as being about the control of emotions. Watching it again, I remembered how far this was from the truth. Alec and Laura speak their feelings for each other with an almost wild abandon once the floodgates are open – Alec’s expression of devotion while they dry off in the boat house is as frank and heartfelt a declaration of love as you are likely to hear. Laura’s emotions – her joy and her pain – are not only written across her face, but spilled out across the screen in voiceover. The characters button this up when with others, but alone they are as high on love as a pair of first-date teenagers. Throughout, the writing of their dialogue is spot-on – from their initial slight shyness to the way their lines interlock and complement each other. Again, compare how Laura talks with Alec – naturally, freely, each line developing smoothly from the other – with how she communicates with everyone else in the film (haltingly, distant, talking at cross purposes, subject matter changing from line to line). I could do without chunks of the voiceover, but the dialogue is sublime, both in its style and its construction.

You can’t go far wrong either when you have actors as good as this, with such chemistry. Celia Johnson gives one of the most perfect, iconic performances in the history of cinema. Does she strike a wrong note once? I’ve already waxed lyrical about her expressiveness – but watch her in every scene, you always know what she is thinking. Her understanding of Laura is complete, and she brilliantly shows throughout the torn loyalties between the life she has and the one she could have – between making herself happy and doing “the right thing”. The film is really her story and Johnson creates a character I can’t imagine someone not relating too. Her voice is in a way ripe for parody with its crisp 1940s tones, but along with her beautifully expressive eyes under the surface of that stiff-upper lip sharpness, there are wonderful beats of emotion and desperation.

Trevor Howard is equally good as Alec Harvey – it’s amazing to think this was only his second film role. Harvey is a character we are slightly distanced from in comparison with Laura – it’s arguable that, since the film is delivered through Laura’s voiceover, we only see him (except in the opening moments) as Laura perceives him. Howard has a charm, a gentleness and an honour about him that make him a man we can relate to, but the actor also brings an edge of danger to him that make him a plausible would-be adulterer. Early in the film it’s Alec who makes the running, pushing for dinners and bunking off work for cinema trips. It’s he who sets up the possibility of consummating the relationship, and makes the first formal declaration of affection. In fact you can see, in that slight edge that Howard gives it, why some have plausibly argued that Harvey could be a serial seducer. But that’s subtext – like Johnson, Howard is perfect.

Brief Encounter is one of those films that rewards constant reviewing. It’s a brilliantly told, tightly structured and beautifully shot story that is also deeply moving and emotional, because it feels so real. It’s possibly one of the best expressions on film of falling in love, and all the excitement and danger that it brings. Perhaps that is why it moves us, and continues to have such appeal – all of us have had that excitement of spending every moment you can with someone else, of sharing everything with them. It’s an addictive and exciting feeling, and this film captures it perfectly. It also moves us because, deep down, we like sad tragic endings – they have real impact when we have related so strongly to the characters, and they stick with us. Because, you always remember when you have been heartbroken – and seeing it so vividly brought to life by Celia Johnson in a truly great performance helps to make this film permanently rewarding.
Email ThisBlogThis!Share to TwitterShare to FacebookShare to Pinterest
Labels: 1945, British Films, Celia Johnson, David Lean, Joyce Carey, Romance films, Stanley Holloway, Trevor Howard