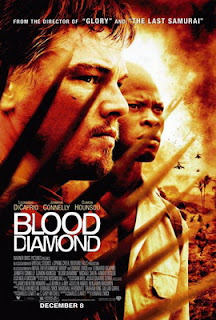 Hollywood films set in Africa often have a difficult conundrum – they want to tell a story about that often troubled continent, but struggle to do so without feeling impossibly worthy – and often need to filter the story through the experience of white westerners in the region. Blood Diamond tries to avoid these traps very hard – but largely ends up falling into them.

In 1999, Sierra Leone is ravaged by Civil War. Fisherman Solomon Vandy’s (Djimon Hounsou) village is attacked by rebels, led by Captain Poison (David Harewood), and his son is taken as a child soldier. Captured Vandy is forced to work at the diamond mines, where he discovers a priceless “Blood Diamond”. After concealing it, Vandy is captured by government troops. Overhearing of the diamond’s existence from a confrontation between Vandy and Poison in prison, Rhodesian arms trader Danny Archer (Leonardo DiCaprio) enlists Vandy to claim the diamond – promising to help find Vandy’s lost family with the help of journalist Maddy Bowen (Jennifer Connolly).

The only thing that elevates this rather shallow film is the excellence of its two lead performers. Both DiCaprio and Hounsou give committed, energised and emotional performances way beyond the clichés and mundane predictability of the rest of the film. DiCaprio has a fairly standard redemption cycle, but invests Archer with an inner pain, a supressed sense of honour and a bitter anger at the world that acts as a shield against opening himself up to affection and friendship. Hounsou takes on the difficult task of effectively representing Africa, but makes Solomon a living, breathing man, a loving father but also a rash man, defensive but burning with emotions.

It’s a shame the rest of the actors aren’t given the time to build these sort of real human portraits out of this stodgy script. Jennifer Connolly in particular is cursed with a lousy part – every third line is either a plot device or a method of communicating facts and figures from the writer’s research. The film is bookended by tedious “G8” meeting scenes where (mostly white) politicians effectively sanctimoniously read the contents of Wikipedia’s Sierra Leone pages at each other.

The film manages to tick most of the expected boxes of African-set Hollywood films, with poverty, violence, blood diamonds, war lords and child soldiers all mixed in. It’s very clear all involved were of the opinion they were making an “important” film. It’s this “on the nose” seriousness that prevents the film from being a really effective piece of message-film making, not helped by Zwick’s careful but uninspired direction. It’s not a bad film by any stretch, but it is only a competently well-made, average one.

Throughout, messages are heavily delivered and metaphors hammered home (a metaphor about the blood in the soil is whacked over our head at a crucial dénouement). The film overeggs the pudding for its emotional moments – the final scene certainly goes too far. Many of these problems come back to the script, which is so wedded to its research and earnestness, that it keeps getting in the way of the moments when the film tries to come to life. We never really feel we are actually sharing the experience of those most affected by events (even Vandy is really a supporting actor in his what should be his own movie, his experience filtered through the impact it has on Archer).

So this is a flawed film, but it still sort of works – and most of that praise needs to go to the leads, who deserved a far better film. It’s predictable and sanctimonious, keen to be a landmark piece of cinema, but really it’s just another Hollywood “message” piece. DiCaprio and Hounsou sell the hell out of the predictable story and stodgy script, and make it one that keeps your interest throughout, even if it never really hits you with the impact it desired.
Email ThisBlogThis!Share to TwitterShare to FacebookShare to Pinterest
Labels: 2006, Arnold Vosloo, David Harewood, Djimon Hounsou, Jennifer Connelly, Leonardo DiCaprio, Michael Sheen