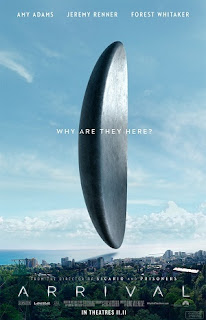 Aliens in Hollywood movies don’t often seem to mean well. For every ET you’ve got a dozen Independence Day city destroyers. But few films have really dealt directly with the complexities that might be involved in engaging with a species for the first time. How would we talk to them? How could we find out what they want?

Those are the questions that Dr Louise Banks (Amy Adams), the world’s leading linguist, has to juggle with after she is called in by Colonel Weber (Forest Whitaker) to establish communication with the inhabitants of an alien ship, one of 12 that have appeared across the globe. Working with physicist Ian Donnelly (Jeremy Renner), Banks strives to build trust and a basis for common language with the aliens. Throughout, she must deal with her military superiors’ lack of understanding of the painstaking nature of her work, the paranoia and fear of the nations of the world, and her own increasingly intrusive dreams and memories.

This is grown-up sci-fi, directed intelligently by Denis Villeneuve, whose confidence and artistry behind the camera oozes out of every shot. It’s a film that wants us to think, and urges us to consider the nature of humanity. Communication between humans and the “heptapods” is the film’s obvious focus, but it is equally interested in demonstrating how distrust and paranoia undermine how we talk to each other. Not only is this in the clashes between nations, but on a smaller scale by the communication between military and science, the uniforms in charge largely failing to grasp the slow and painstaking nature of Banks’ work. On a personal and emotional level, we see the slow growth of understanding between Banks and Donnelly, their increasing ease with each other as they break down the barriers between them, and between humanity and the aliens.

Far from the bangs and leaps of inspiration that science normally sees itself represented by onscreen, this film attempts to follow the methodical process of building an understanding of a concept from nothing, and the careful hours of work that underpin sudden revelations. The film is very strong on the complexities of linguistics and the difficulty of conveying exact translations, including intent, context and meaning, from one language to another. In fact it’s a wonderful primer on the work of linguistics experts, offering a fascinating breakdown of how language is understood, translated and defined between two groups without a common tongue.

This is also helped by making the aliens truly alien: I can’t remember a set of Hollywood aliens as otherworldly as these are. Not only is their language completely different (based on symbols and strange echoes like whale song), but physically they bear no resemblance to humans at all (I confess that I was momentarily distracted here, as their tentacles and residence in a gas-filled box rather reminded me of The 465 in Torchwood: Children of Earth). They lack clear arms, legs or even faces. Their technology is advanced and immediately unsettling. Jóhann Jóhannsson’s wonderfully eerie and imposing score brilliantly helps to capture this otherworldly sense, as does the crisp photography and unique production design of the alien ship. The film walks a brilliantly fine line between wonder at the aliens and a sense of unsettling dread that means we (like the characters) are never comfortable in making assumptions about their motives.

Much of the film’s success as a viewing experience also depends on knowing very little about it. For me this film delivered one of the most effective late-plot re-evaluations I’ve seen: I had no inkling of this gear shift, or how a late piece of information demands that we adjust our understanding of everything we have seen so far in the film. This is actually one of the best done examples I’ve seen of a twist (calling it a twist seems somehow a little demeaning, as if this was a Shyamalan thriller, but a twist it is) – I in no way saw it coming, but it suddenly makes the film about something completely different than you originally believed it would be. I won’t go into huge details, but the film raises a number of fascinating questions around pre-determination and fate that challenge our perceptions of how we might change our lives if we knew more about them. To say more would be to reveal too much, but this twist not only alters your perceptions of the films but deeply enriches its hinterland.

I would say the film needs this enrichment as, brilliant and intellectual as it is, it’s also a strangely cold film that never quite balances the “thinking sci-fi” with the “emotional human drama” in the way it’s aiming for. Part of this is the aesthetic of the film, which has a distancing, medical correctness to it – from sound design to crisp cinematography – and which, brilliant as it is, does serve to distance the viewer emotionally from the film. Despite the excellence of much of the work involved, I never quite found myself as moved by the plights of the characters, or as completely wrapped up empathetically with Adams’ character, as the film wanted me to be. While the ideas in the film are handled superbly, it doesn’t have quite as much heart as the plot perhaps needs to strike a perfect balance.

What emotional force the film does have comes from Amy Adams. It’s a performance that you grow to appreciate more, the longer you think about it. It’s a subtle understated performance, soulful and mourning, that speaks of a character with a deep, almost undefinable sense of loss and sadness at her core. You feel a life dedicated to communication and language has only led to her being distanced from the world. Adams is the driving force of the film – though very good support is offered from Renner as a charming scientist who also convinces as a passionate expert – and the film’s story is delivered largely through her eyes, just as the aliens’ perception of humanity becomes linked to her own growing bond with them. I will also say that Adams also has to shoulder much of the twist of the film – and it is a huge tribute to her that she not only makes this twist coherent but also never hints at the reveal until the film chooses to.

Arrival is a film that in many ways is possibly easier to respect than it is to love: but I find that I respect it the more I think about it. It does put you in mind of other films – the aliens have more than a touch of 2001’s monolith to them and Villeneuve’s work is clearly inspired by a mixture of that film and Close Encounters. But this is a challenging, thought-provoking piece of work in its own right and one that I think demands repeat viewings in order to engage the more with its complexity and the emotional story it is attempting to tell. It may well be that on second viewing, removed from puzzling about the mystery in the centre, I will find myself more drawn towards it on an emotional rather than just intellectual level. That is something I am more than willing to try and find out from a film that I think could become a landmark piece of intelligent sci-fi.
Email ThisBlogThis!Share to TwitterShare to FacebookShare to Pinterest
Labels: 2016, Amy Adams, Denis Villeneuve, Forest Whitaker, Jeremy Renner, Michael Stuhlberg, Science fiction