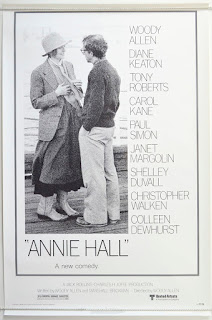 Why is love so damned difficult? And, as it is, why do we keep setting ourselves up for a fall with it? Why are we all such relationship addicts? These are questions that Woody Allen tackles in Annie Hall, the film that elevated him from comedian to Oscar-winning cinematic super scribe (he won three Oscars for the film – Picture, Director and Writer). Does it deserve its reputation? You betcha.

Alvy Singer (Woody Allen) is a neurotic New York comedian (is it any wonder he was seen as synonymous with Allen himself?), twice divorced and incapable of maintaining a relationship. He meets Annie Hall (Diane Keaton, Allen’s ex-girlfriend playing Allen’s character’s eventual ex-girlfriend, using Keaton’s real name as a character name – confused?) over a game of mixed doubles tennis, and their immediate chemistry and shared sense of humour leads to a romantic relationship. Their only problem? Their innate neurotic self-analysis that stands forever in the way of maintaining a relationship.

Annie Hall is a deliriously funny film – I actually think it might be one of the funniest I have ever seen – with an astounding gag-per-minute hit rate. Allen uses multiple techniques to deliver gags: commentary, voiceover, celebrity cameos, an animated interlude, “what they are really saying” subtitles, flashback, direct to camera address – and the blistering parade of delivery styles never seems jarring, but ties together perfectly. Large chunks of the film are inspired high-wire dances where a punch-line is a few beats away, and the film never settles into a style or becomes predictable. So many of the jokes have become so familiar due to their excellence that it’s almost a shock to see them minted freshly here – and the fact they all land so effectively is a tribute to the performers.

In many ways, Annie Hall is a series of sketches loosely tied together with an overarching plot line. In fact Alvy’s constant commentary on events (a brilliant playing with conventional cinematic storytelling form), add to the feeling this is in some ways an illustrated stand-up routine by a gifted self-deprecating comedian. The material seems so synonymous with Allen’s personae (and the characters of Alvy and Annie so close to what we know about the actors who play them) it’s very easy to see the whole film as auto-biographical. Not that there’s anything wrong with that – particularly as the hit rate of the gags here is so phenomenally high.

But what makes this film such a classic is that it is more than a collection of excellent jokes. Allen is also telling a story about romance – or rather or need for romantic connection, and how easily we can sabotage or undermine this through our own mistakes, errors and (above all) neuroses. Alvy Singer is almost chronically incapable of embracing happiness and contentment, with every good thing merely an interlude between crises. Annie is the most promising opportunity he has had for long-term contentment – and still his neurotic self analysis gets in the way. As such the film is about the quest for love – and the title Annie Hall (not the character) is a metaphor for this – to Alvy Annie Hall represents the perfect relationship, something he (and indeed she as well) will never accomplish.

The film perfectly captures the dance of first meeting – the shy, stumbling early conversations of people who are attracted to each other but are both trying too hard (the subtitles here are a brilliantly funny choice – we’ve all thought to ourselves “what am I saying?” in that situation!). There is a wonderfully playful scene where Alvy panics over the cooking of lobsters – clearly playing up for Annie’s delighted engagement in it, as she photographs his distress. These photos appear in the background, framed on their wall, as their relationship breaks up relatively amicably later. At another point, Alvy attempts to recreate the same moment (same location, lobsters again) with a new girlfriend – only to be met with unamused, annoyed confusion. It’s a perfect little vignette that captures the magic of chemistry – and the difficulty of finding it or holding onto it.

Because what is striking is that Allen allows the relationship to break apart surprisingly early. Roger Ebert has written about Annie almost “creeping into” the film – and this is true. She is only briefly seen in the first 25 minutes (the first third of the film almost!) as the focus is on Alvy’s discussion of his background and childhood, and his past romantic failings and sense of disconnection from people. Then very swiftly after its establishment, the relationship is past its prime, with both parties finding it hard to keep the interest going. The second half of the film follows them amicably drifting apart – meaning this is probably the most romantic film about a long break-up ever made.

The film has a beautiful little wistful coda of Alvy and Annie meeting outside a cinema, each with new partners. In long shot we see them engage in an animated and engaged conversation while their new partners look on, nervously smiling. The magic link between them hasn’t faded away, and their importance to each other, and natural chemistry, hasn’t changed – but, the film seems to be saying, their natures work against them. It’s one of several touching moments in the film that demonstrate the heart that underpins the jokes. After their first break up, Annie calls Alvy round to get rid of a spider in the bath. He does so with comic incompetence, then in a still medium shot he comes to Annie in the corner of the frame sitting on the bed. They reconcile and then embrace tenderly – it’s a beautiful, moving, gag-free moment, all the more effective as its reality is contrasted with the humour throughout the rest of the film.

The film is a full of tender and real moments like these in between the jokes: it’s a nearly perfect balance between them. The parts are perfectly written for the actors: Allen is so brilliantly good here as Alvy that the character has essentially become the public persona of Allen (and allegedly his desire to never make a sequel was linked to his unease with the association between Alvy and himself). Diane Keaton (her real surname being Hall and her nickname Annie) also had this part perceived as a loose self portrait (her past relationship with Allen not helping). Truth told, it’s a very simple part and Keaton actually has to do very little in the picture beyond react (the focus is so strongly on Alvy) and deliver the role with charm – but she captures the sense of an era shift, a woman stuck between transitioning from the hedonistic 60s to the ambitious 80s, an ambitious free-spirit. The Oscar for the role was generous, but not undeserved.

For all the film’s emotional understanding and complexity, it’s the jokes though that you will remember, and they are glorious: Alvy’s schoolfriends telling us what they are doing now as adults; Alvy’s description of masturbation; the accident at the cocaine party; Christopher Walken’s monologue on driving; the puncturing of the pretention of a loud-mouth know-it-all in a cinema queue – it’s a blistering array of comic genius and it will have you coming back for more and more. It’s Allen’s most garlanded movie and it’s certainly the best balance he ever made between “the early funny ones” and his “later serious ones”. It’s simply shot, but told with heart, feeling and emotional intelligence and with dynamic, comic wit – it’s one of Allen’s greatest movies.
Email ThisBlogThis!Share to TwitterShare to FacebookShare to Pinterest
Labels: 1977, Carol Kane, Christopher Walken, Diane Keaton, Romance films, Romantic comedy, Shelley Duvall, Woody Allen