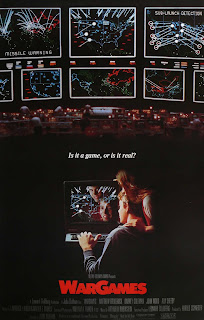 If you worked in a nuclear launch centre and received orders to launch out of the blue, would you want to make a phone call to confirm? That’s the compelling idea that opens this tense but engagingly playful film on nuclear politics that successfully balances teen high-school drama with the possibility of Armageddon. For the record, the man who wants to make the call (played by Leo McGarry himself, John Spencer) outrages his subordinate so much with this breach in protocol that the subordinate pulls a gun on him and demands he follows the orders.

David (Matthew Broderick) is that staple of high-school drama, the geeky genius who coasts through school. He’s a computer genius and, attempting to impress cool girl Jennifer (Ally Sheedy), one-day he finds a back-door into NORAD’s weapons control system WOPR (aka JOSHUA). Thinking he’s found a computer games company, he accepts its invitation to play “Thermonuclear Global War”. Before he knows where he is, he’s in custody and bombs are fueling in their silos.

The opening of the film (a brilliantly self-contained mini-movie) perfectly encapsulates the swiftness of escalation in a nuclear war. At least three more times in the movie, we see how swiftly events can push on from DEFCON 5 to 1. This is a film that questions the very purpose of both the nuclear deterrent and nuclear war itself. There isn’t a single character who truly advocates the purpose of the weaponry, and none of them is anything but terrified at the prospect of pushing the button. But this questioning is handled lightly, and Badham’s direction never allows it to dominate proceedings. The film tackles such a big topic with such a sharp and fun script, and at such a rollicking, enjoyable pace with laughs and thrills, that it must count as a some sort of minor classic.

The film is also of course about computers and hacking. There is actually a lot of charm in watching, on my tablet, a film where a computer takes up the space of a room and an actual telephone is used to hack into an external network. This is probably one of the first films ever to demonstrate hacking and the potential influence of computers. Thrillingly, the film has both a warm acceptance of the advantages computers could bring, and a suitably sci-fi dread of what they may (unwittingly or not) unleash on the world if granted full power over us.

Because this film recognises, arguably ahead of its time, that the mechanisation and omnipresence of computers is terrifying. Like John Spencer in the film’s opening, most of us (I hope!) would want to speak to another human being before pressing the buttons. JOSHUA is scary because it is so benignly controlling – it believes that nuclear war is just another game, and has no understanding at all of the impact on the world its actions will have. JOSHUA isn’t a villain at all – it’s literally an ill-educated child that hasn’t learned its actions have consequences and can’t tell the difference between simulation and reality. It’s the nightmare scenario of having all the empathy and emotional intelligence removed from the world of decision-making.

This isn’t just a film about technology and nuclear politics though – far from it. It’s an engaging human story, told in a tight and streamlined way, and staffed by a very well written selection of characters who all feel tangible and real. Broderick and Sheedy are wonderfully engaging leads, with a great deal more depth than the cliché: David is far more assertive and determined than you might expect, while Jennifer has much more sense and humanity than a high-school Queen. This extends to our NORAD location: Dr McKittrick is far more empathetic and willing to listen than first impressions suggest, and General Beringer is a thoughtful, sensitive man at odds with his obstructive, gung-ho first impression. John Wood (a great stage actor who never quite got the film roles he deserved) plays Dr Falken with wit and a knowing wink, his disillusionment with the world sitting alongside a wry delight.

I was actually surprised how much I enjoyed this film and how well it stands up. It’s thought-provoking but it’s also a lot of fun and very well written, acted and directed. There is a very good mixture between “action” sequences – a wild drive and run to get into NORAD before it is locked down is particularly exciting – and conversation scenes that, due to their high stakes and impassioned acting, play like verbal action scenes. It’s superbly designed too, with the NORAD “war room” in particular setting the pattern for all such locations in future movies.

This is a perfect marriage between the blockbusting mindset of the 1980s and the cynicism of the 1970s. Because it’s a blockbuster and has kids in leading roles, it’s never got the credit it deserves – but this has as much merit as many political and conspiracy thrillers of the cynical 1970s.
Email ThisBlogThis!Share to TwitterShare to FacebookShare to Pinterest
Labels: 1983, Ally Sheedy, Dabney Coleman, High school drama, John Badham, john Wood, Matthew Broderick, Nuclear tension