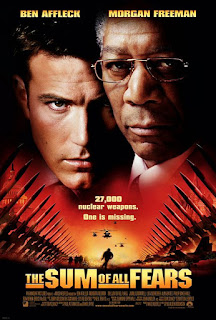 In the aftermath of 9/11, people debated whether that atrocity would lead to a change in how Hollywood made blockbusters. Would the public still have the taste for American landmarks being destroyed in the name of entertainment? I guess the answer was “sure they would”, because less than a year later Baltimore was being wiped out by a nuke in The Sum of All Fears. And people generally did find it entertaining. As they should: this is not a smart film, but it is fun, and with hardly any violence or swearing it’s a perfect “all generations” viewing thriller.

The fourth entry in the on-again, off-again Jack Ryan franchise, a series of loosely connected but enjoyable films based on Tom Clancy’s novels, this reboots the saga after two entertaining airport-novel style films starring Harrison Ford. Ryan (Ben Affleck) is now a young CIA analyst who is suddenly thrust centre stage in the Agency when Alexander Nemerov (Ciarán Hinds) rises to power in Russia. Before he knows it, he is working closely with CIA chief William Cabot (Morgan Freeman) and briefing the President (James Cromwell). Working with agent John Clark (Liev Schreiber), Ryan investigates rogue nuclear weapons in Russia, little knowing that it is part of a fiendish plan by European neo-Nazis, led by Richard Dressler (Alan Bates), to plunge Russia and the US into a nuclear confrontation.

First off the bat, Tom Clancy hated this film. He even does a commentary on the DVD which is a scene-by-scene breakdown of all the things he doesn’t like and the terrible changes he felt had been made from his book. I can see why he’s upset, but this is actually a very entertaining, solid, slightly old-fashioned piece of film-making. Clancy’s books aim to be “a few degrees to the left” of reality, to present something that could happen. This film is more of a Bond movie, not least in its choice of baddies. The book uses Arab terrorists. Wisely (I think) the film changes this to a set of Bond-villain like Nazis, embodied by Alan Bates’ enjoyable scenery-chewing performance as a slightly camp chain-smoking Nazi (“Ze Fuhrer vasn’t crazee. He vas stoopid”). There is even a scene where one of the plotters, Goldfinger-style, announces ’I will have no part in this madness’ only to be swiftly bumped off. Clancy hated it, but it’s something a little different and also enjoyably silly.

Besides, you might have felt there was enough vibe of reality in there for Clancy with the reaction to the big one being dropped on Baltimore. The build-up to this sequence is very well done, cut and shot with tension, and Jerry Goldsmith’s score really effectively helps with this build. It’s also quite shocking to actually see the plan succeed: and the shots of a mushroom cloud over the city are presented with a sombre sorrow. There is probably more Clancy criticism for Ryan’s effortless travel around the irradiated city (and his totally unaffected cell phone) but this sequence is still damn good.

Similarly skilfully done is the reaction of the politicians. Daringly, the US politicians are to a man sweaty, stressed old white guys (Air Force One takes off to the accompaniment of them screaming at each other). One of them even has a heart attack. The American politicians may be reluctant – but they are the fastest to rush towards pushing the button. They are also shown to be hopelessly lacking judgement when it comes to appraising the likely reactions to their decisions: one reassures the President that the Russians won’t respond to a full nuclear strike against military targets! The fast build from angry words to a bombers is terrifically done.

The Russians are similarly twitchy – and unlike the Americans, far more susceptible to bribery and collaboration with our villains – but interestingly their President is the “reasonable man”, whom Ryan (and the audience) respects. Charismatically embodied by that wonderful character actor Ciarán Hinds (the film deservedly brought Hinds to America’s attention and he hasn’t looked back since), Nemerov is the wisest, smartest guy in the room – a realist and level-headed man. Hinds is actually the stand-out in the film, superbly backed up by Michael Byrne as a shady (but surprisingly cuddly) KGB fixer.

The build-up to the remorselessly exciting nuke and aftermath sequences is pretty traditional fare but well directed by Phil Alden Robinson and a very good cast of actors largely deliver in their roles. Affleck at the time was heading into the height of his Bennifer unpopularity: he gives a decent performance as Ryan, but Ford is a tough act to follow and Affleck doesn’t quite have the same “ordinary-joe” quality Ford and Baldwin brought to it earlier. He also doesn’t quite have the leading man charisma the part needs to carry the film (Affleck’s best work is as a character actor, but he is trapped by his leading man looks). Fortunately Morgan Freeman, calmly contributing another of his wise mentor roles, offers sterling support. Schreiber and Cromwell are also good in key roles.

This is a very traditional, quite old-school thriller, inspired by a combination of Goldfinger and 1970s political thrillers. It’s not a special film – and not even the best in the franchise – but it is invariably entertaining, has a host of well-done scenes, and barrels along. Robinson also has an eye for tension in smaller sequences – a marvellously tense scene simply involves Ryan trying to get a card swipe machine to work – although he is less confident with some of the action. But in showing how quickly our trigger happy masters can push towards Armageddon, this is a film that seems to be endlessly relevant. And wouldn’t you rather have Nemerov of even Fowler running the US than Trump?