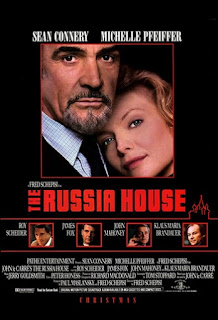 Based on John Le Carré’s novel, The Russia House was one of the first espionage thriller films released after the fall of the Soviet Union, and therefore found itself exploring the curious impact of Glasnost on the games of one-upmanship that East and West played with each other.

Barley Blair (Sean Connery) is an over-the-hill publisher with connections in Russia, who is enlisted by MI6 to recruit the mysterious “Dante” (Klaus Maria Brandauer, a little too mannered for the film and under used), whose manuscript about Russian nuclear readiness has been intercepted en route to Blair by the intelligence services. Blair’s main contact is Dante’s former lover Katya (Michelle Pfeiffer), a woman trapped in political games.

Second-tier Le Carré is brought to the screen in a film that perfectly captures the authorial voice, but missing  narrative drive. Tom Stoppard’s adaptation masterfully captures the nuances and rhythms of Le Carré’s writing – the conversations of the CIA and MI6 operatives, their lingo and phraseology, are a perfect evocation of the author’s style, while Barley comes to the screen as almost the quintessential disillusioned middle-aged romantic: scruffy with a drink problem and a public school disdain for the prefects of the intelligence service.

The film’s other major positive is the central performance of Sean Connery. The former James Bond (then in the middle of a five-year purple patch of great roles which ran from The Name of the Rose to The Hunt for Red October) brilliantly plays against type as the dishevelled Barley, a man who feels like he has spent a lifetime circling failure and unreliability. Connery tones down his athletic physicality as an actor, playing Barley as a shuffling, hunched figure, often a step behind those around him. He’s also able to capture the romantic defiance behind Blair as well as a sadness and a self-loathing, his eyes showing years of shame at his own unreliability and the disappointments he has inflicted on people. It’s one of his least “Connery-like” performances, and a real demonstration of his willingness to stretch himself as an actor.

He’s well matched by some fine supporting performances. Pfeiffer is a very good actress who balances Katya’s vulnerability with a shrewd understanding of the compromises and dangers of the world she is in. Having said that, the chemistry between her and Connery doesn’t quite click into place during the course of the film. There are also good performances from James Fox and Roy Scheider as feuding intelligence boffins, and an eye-catching “love it or loath it” one from Ken Russell playing one of Le Carré’s quintessential campy, eccentric public-school intelligence operatives.

The film’s main weakness is that the actual story just isn’t quite interesting enough. The stakes never feel as high as they should be, and the unfolding of events seems unclear rather than carefully concealed from the audience. Despite the actors’ performances, Blair and Katya aren’t quite characters we can invest in enough and the momentum of the film too often gets bogged down in a reconstruction of intelligence agent squabbles. Schepisi films the Russian locations extremely well, but too often the camera lingers lovingly on a series of locations like a travelogue, slowing down the pace of the film as the film revels in its status as only the second Hollywood production allowed to film in Russia.

It’s an intelligent and faithful adaptation, but it doesn’t quite come to life. Stoppard’s script doesn’t carry enough narrative thrust and you simply don’t care enough about the fates of many of the characters. In many ways, a less faithful adaptation – such as the BBC’s recent production of The Night Manager – might well have made for a more compelling movie. As it is, although the film feels like an immersion into the author’s universe, it also feels like a dip into one of the less engaging and memorable offerings in his back catalogue. Along with the book’s strengths, it also carries across weaknesses. It’s satisfying enough and doesn’t outstay its welcome – but it also never really seizes the attention.
Email ThisBlogThis!Share to TwitterShare to FacebookShare to Pinterest
Labels: 1990, Fred Schepisi, James Fox, John Le Carré, Ken Russell, Klaus Maria Brandauer, Literary adaptations, Michelle Pfeiffer, Roy Scheider, Sean Connery, Spy thrillers, Tom Stoppard