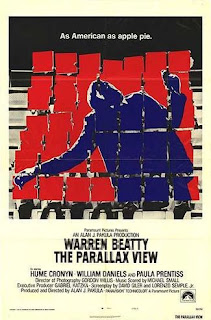 The 1970s. The decade that made the conspiracy theory popularly accepted. We all love them now – but the 1970s, with its growing disillusionment, was when it first became fashionable to openly question the reality placed before us. The Parallax View is perhaps the greatest conspiracy film ever made, an “experience” movie that captures the mood of the time so well because nothing in it is real, but everything about it feels like it could be real.

The film opens with the assassination of a reforming senator at the Space Needle in Seattle. A senatorial enquiry reports the act was the work of a lone gunman. Three years later, reporter Joe Frady is tipped off that many of the witnesses have been killed in “accidents”. Looking for a big scoop, Frady launches a one-man investigation. This suggests the assassin was someone else entirely, recruited by Parallax, a corporation in the business of identifying and training possible assassins. Or is it? Too late, Frady realises what he has got himself into.

The Parallax View is an unsettling, haunting piece of film-making with an impossibly glum view of the world as one where the goodies don’t have a hope in hell. It works despite (because of?) its lack of conventionality: it’s an investigative film where the investigator finds almost nothing out. It’s a tense thriller with no real plot. It tricks us throughout into thinking Frady is completely in control, when he is just a rat in a maze. It’s a film about plot rather than character, but it actually has very little plot as such in it. It’s more like an experience, an immersion in the shady underbelly of America.

Pakula’s direction is masterfully controlled. Every shot is carefully organised. Every scene builds the complete picture. There is no fat on the film at all: everything we see is relevant. Sequences crackle with tension – most famously, a sequence where Frady finds himself on a plane he knows is carrying a bomb: wordlessly he scrambles desperately for a method to communicate this to the staff. The final sequence at a rehearsal for a senatorial rally is also nearly wordless, but is shot and edited with a relentless inevitability in it, Frady a powerless onlooker.

Warren Beatty gives an intriguing performance as Frady. He isn’t afraid to make Frady slightly unsympathetic: an arrogant loner, nowhere near as clever as he thinks he is. His investigation is, when you look at, hilariously ill-prepared and blindly headstrong. He goes up against the system with little more than a complete faith in his pluck and resourcefulness. It’s not enough. Beatty has a cocky hipsterish quality, which only occasionally cracks when he realises he is in over his head. His attitude is summed up perfectly when he is confronted by a drunk cop in a bar: the cop tells him he’s got a hair like a girl; yup, replies Frady with casual defiance and contempt, that’s right I’m a girl. This is more infuriating than any angry retort would be – cue a barfight. It’s a nice, unflashy performance, full of subtle observances, that allows the plot to be the central character.

Gordon Willis was one of the leading photographers of the 1970s and created the visual language of the era’s best films (he also shot The Godfather and All the President’s Men). His photography became synonymous with an impression of the era as one of muddy colours and oppressive architecture, with well chosen streaks of colour throwing these into perspective. His framing throughout the film is exquisite. Events are framed to throw the principal characters into the corners of the frames. Unusual angles show buildings and architecture as oppressive monoliths. Long shots are combined with deep focus to give striking images – my favourite is a long shot from the roof of an air hanger, as a dead man’s golf buggy continues its unguided path, crashing quietly and slowly through tables and chairs. An interesting breakdown of the visual language of the film can be found here.

Sound is also brilliantly used. The score is practically the dictionary definition of spare. Silence is wonderfully used. Background noise dominates several scenes. Life and death events happen silently, lost among the sound of the world around them – whether that be waterfalls, parades or political speeches played over loudspeakers. The effect throughout unnerves and disorientates. It’s all part of the film’s device: the plot is actually extremely simple and the film is a punchy hour and a half. The key thing is the unsettling experience of watching the film, not revelations about our world like in, say, JFK. There is no mystery as such to unravel. Instead we are thrown into this world with no helping hand to guide us through it.

I have to mention the extraordinary assassin recruitment film Frady is brought in to watch by Parallax. It’s a fascinating triumph of editing, a deeply disturbing arrangement of images that slowly switch from positive to negative, subliminally building a message of the need for the individual to take decisive action. I won’t go into all this now – a well-written breakdown of its meaning is here and you can watch it here.

It’s an unnerving experience because Pakula edits it into the film so we have the experience of watching it with Frady. We never see his reaction to it: we see him enter a dark room in long shot, take a seat – and then the film is played as part of the movie, entirely from Frady’s POV. For a brief spell we literally are Frady, being tested by this company.

And Frady is being tested. His arrogance, his go-it-alone independence, his lack of real relationships or friendships make him (unknowingly) a perfect Parallax subject. Unnervingly we are given no idea of Parallax’s aims. We never learn anything about them and why they do what they do. Are they in it for the personal gain? Are they hired guns? Is their whole programme not about recruiting assassins but recruiting plausible patsies to cover for the real hitmen (that certainly seems to be the impression from the film’s bleak ending)? It’s all left up to the viewer to decide from the scant evidence supplied.

What is clear is that The Parallax View is a deeply troubling film, which presents a haunting and disturbing image of a country where justice is dead and power talks. The film is bookended by a senate commission in session (seemingly floating towards the camera in a brilliant camera effect), giving almost identical reports on assassinations. It’s a chilling film, where even the heroes are not particularly sympathetic or heroic and where hope and change are distant dreams. It’s perhaps the perfect 1970s film.
Email ThisBlogThis!Share to TwitterShare to FacebookShare to Pinterest
Labels: 1975, Alan J Pakula, Conspiracy, Thrillers, Warren Beatty