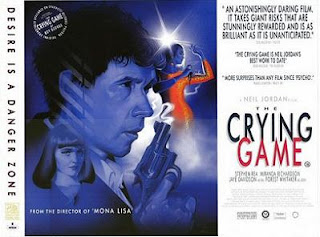 The Crying Game is one of those little movies that could: a small scale British/Irish drama about human nature and dangerous relationships, which suddenly burst into the world big, was nominated for five Oscars and won one for its creator, turning him into a widely respected writer/director.

The film follows Fergus (Stephen Rea), an IRA soldier who, over a long night, bonds deeply with Jody (Forest Whitaker) a British soldier his unit are holding hostage with the intent of killing him if their comrades are not released. When Jody is accidentally killed trying to escape his execution, and British soldiers wipe out his cell, Fergus escapes to a new life in London, aiming to track down Jody’s girlfriend Dil (Jaye Davidson) whom Jody asked him to find. Fergus discovers things about himself and Jody in London he little anticipated – and also finds that his IRA companions, especially the dangerous Jude (Miranda Richardson), are not as deceased as he believed.

When it was first released in the UK, The Crying Game was a critical and box-office disaster. This was linked to its IRA plotline, largely on account of the film’s unwillingness to stick an unequivocally clear condemnatory label on the IRA. Of course, the film is not a film about terrorism at all – and whatever it says about the rights and wrongs of the British presence in Ireland (very little indeed), I think it’s pretty clear that it shows killing and violence are completely wrong. However, the film was saved by its huge success in America. There, its subject matter didn’t provoke the same level of controversy it was re-marketed as the biggest “twist” film since Psycho.

And ever since then I would say it has stayed in that list of great “twist” films – up there with The Usual Suspects, The Sixth Sense, Planet of the Apes, Fight Club and of course Psycho, among many others. Most of its mystique at the time was due to the fact that the twist was revealed just over halfway through the film and was based around a theme that has gained far more familiarity to us today. I won’t say what the twist is (just in case), as seeing it unfold is a pleasant surprise that turns what we think we know about several of the characters on its head. I’ll simply say that it is a question of identify and leave it at that.

Identity is appropriate, as that’s what this film is about: the images we build about ourselves and how we project those to the people around us. The way our environment, and the people we spend time with, help to shape the people we are. The sometimes unexpected depths that we discover within ourselves. The film is dramatically opposed to label altogether: hence it can present a gunman for the IRA who is a sensitive and kindly soul, whose relationships with others are based on gentleness (and Fergus is just one of three characters in the film who turn out to be very different from our initial perception of them). Many of these reveals are connected to understanding how love and affection can overlap with feelings of attraction and how we express these feelings. This is all parts of the film’s fundamentally humanitarian outlook.

The film has a poetic, at times almost dreamlike, quality about it. There is a lyrical ambience to many of the scenes, with the camera drifting comfortably through the action. Visions of Jody plague Fergus throughout, both day-to-day and (tellingly) during a sexual encounter with Dil. Jody’s image haunts the film, ghost-like, through the many photos of him in Dil’s flat. Many of the events have a similarly haunting sense of being a few degrees out of reality. It’s got the sense of a violent bedtime story or fairy tale in London.

Jordan’s script is outstanding – humane, witty, deeply felt – and the actors embrace the opportunity to play such multi-levelled, difficult-to-pigeonhole characters. It’s also brilliantly constructed into three clear acts, each of which comment upon and deepen the others: we have Fergus and Jody together in Ireland, a tragic growth of friendship and respect between two men; Fergus and Dil in London, a sweet and tentative romance built on secrets; and finally the return of the IRA to London, a destructive thriller. Each act feels like a natural development and there are no juddering changes of tone, as Jordan keeps the focus on the characters and their personal stories and feelings.

A large part of the film’s success is linked to Stephen Rea’s thoughtful and sensitive performance as Fergus, a man who has clearly stumbled into a life of violence despite his sensitive and rather tender nature (and our underlying natures guiding our actions is a major theme of the film). He’s a true lost soul, and his deep (and sudden) friendship with the kidnapped Jody has an ease about it that reveals depths about his character. His relationship with Dil has a sweetness to it, while Fergus is engagingly nervous and tentative of openly expressed love (not to mention that he lies to her – non-maliciously – from the start, as he knows far more about her than she realises). It’s a low-key but commanding performance with a real depth of feeling, and Jordan gives the character a powerful redemptive arc that Rea plays to the hilt.

There is also terrific work from the rest of the cast. This is one of only two films Jaye Davidson ever made, and the untrained naturalness of the acting adds a huge amount to the mystique of the character, as well as making Dil truly sympathetic and intriguing. Davidson’s short career also preserved the unique mystery around the character that was so essential to the film’s success. Forest Whitaker’s English accent is an up-hill battle, but the actor brings his force-of-nature charisma to the part so completely you overlook that he isn’t convincing as a Londoner, a solider or a cricketer. What you do believe is his connection with Fergus, while Whitaker is able to suggest dark hints throughout that his bond with Fergus is as least part manipulation.

Miranda Richardson has the grandest role as a death-dealing IRA hitwoman, which she delivers with aplomb, her dark eyed fanatical fury making her a dangerous antagonist for the film. Jim Broadbent also shines in an early role as an enigmatic barman, but there is hardly a bum note in the acting, although Tony Slattery is perhaps a little too broad as Fergus’ worksite boss.

The Crying Game is a hugely rewarding film to watch, a deep and thoughtful film, packed with wonderful scenes, great acting and guaranteed to lead to discussion and debate after it has finished. Yes it’s a film with a famous twist – but it is not a film defined by that twist. Instead that is only part of the rich tapestry of the film’s exploration of identity, desire and self-knowledge, in which the images we are present to others are as difficult to interpret as the images we present to ourselves.
Email ThisBlogThis!Share to TwitterShare to FacebookShare to Pinterest
Labels: 1992, Forest Whitaker, Irish films, Jim Broadbent, Miranda Richardson, Neil Jordan, Stephen Rea, Thrillers