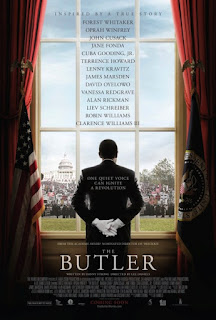 Cecil Gaines (Forest Whitaker) grows up on a plantation in the South; after his mother is raped and his father killed by the son of the house, the family matriarch (Vanessa Redgrave) takes him on as a house servant as a token gesture of regret. His training here sets him on the path to working in a succession of increasingly wealthy hotels and, finally, the White House. Over 30 years, he serves the Presidents in office, never involving himself or commenting on policy, proud of his service to his country. This often puts him in conflict with his Civil Rights activist son Louis (David Oyelowo), with his wife Gloria (Oprah Winfrey) stuck in the middle.

This is the sort of film that feels designed to win awards. It’s based on a vague true story (it changes nearly all the events of course) and it’s about a big subject. It’s got big name actors doing acting. It aims at big themes. What it actually is, is a film that misses its marks. It’s a film that spends time with big themes but has nothing to say about them, or in fact anything interesting to say full stop. It assumes that the historical context will do the work, and leaves it at that. Instead, it settles for trite sentimentality and cliché, personal stories played on a stage that makes those stories seem slight and inconsequential rather than giving them reflective depth.

The biggest problem about the film, leaving aside its heavy-handed sentimentality and mundane predictable storytelling, is that all the way through it feels like we are following the wrong story. It’s such a vibrant and exciting period of history, so full of events, passion and struggle: and instead we follow the story of Cecil, essentially a bland passive character who achieves very little and influences even less. There are vague references to leading “the regular life” and how working in domestic service is like some sort of subversive act to demonstrate the education and hard-working possibilities of the minority, but to be honest it never really convinces.

The film promises that Cecil was a man who had a profound impact on the people he served – but this doesn’t come across at all. Instead, the parade of star turns playing US Presidents are there it seems for little more than box office: we see them speaking about Civil Rights issues or planning policy, but we get very little sense of Cecil having any bond with them. The cameos instead become a rather distracting parade, as if the film was worried (perhaps rightly) that Cecil’s story was so slight and bland that they needed the historical all-stars to drum up any interest in it. It doesn’t help that the cameos are mixed – Rickman, Schreiber and Marsden do okay with cardboard cut-out expressions, but Cusack in particular seems horribly miscast. A braver film would have kept these pointless camoes in the background and focused the narrative on Cecil and his colleagues below stairs, and their struggles to gain equal payment with their white colleagues. This film is seduced by the famous events and names it spends the rest of the time backing away from.

The performance at the centre is also difficult to engage with. Forest Whitaker is such an extreme, grand guignol actor that it’s almost sad to see him squeeze himself into a dull jobsworth such as Cecil. Whitaker seems so determined to play it down that he mumbles inaudibly at great length (it’s genuinely really difficult to understand what he is saying half the time), slouching and buttoning himself into Cecil’s character. It doesn’t come across as a great piece of character creation, more a case of miscasting. Oprah Winfrey does well as his wife, although her character is utterly inconsistent: at times a drunk depressive, at others level-headed and calm. The link of either of these characters to the hardships of life as a Black American or their role in racial politics is murkily unclear.

The star turn of the film – and virtually all its interesting content – is from David Oyelowo, who ages convincingly through the film from idealist to activist to elder statesman. His story also intersects with the actual historical events that are taking place in America and he is an active participant – unlike Cecil the passive viewer, just as likely to switch the TV off as follow the news. Often I found myself wishing the film could follow his character rather than Whitaker’s.

That’s the problem with the film: what point is it trying to make? The film seems to want to honour Cecil’s service in the White house – but the film is a slow journey towards Cecil’s sudden revelation that maybe his son’s campaigning for Civil Rights was the right thing to do. This flies in the face of the film’s tribute to Cecil’s decades of quiet, unjudging service: the film can’t make up its mind whether it wants to salute Cecil for being an unjudging, dedicated servant to a long line of Presidents, or for having the courage to take a political stance towards the end. It’s having its cake and eating it. It’s this shallow lack of stance that finally makes it an empty and rather dull viewing experience.
Email ThisBlogThis!Share to TwitterShare to FacebookShare to Pinterest
Labels: 2013, Alan Rickman, Cuba Gooding Jnr, David Oyelowo, Forest Whitaker, Historical epics, James Marsden, Jane Fonda, John Cusack, Liev Schreiber, Oprah Winfrey, Robin Williams, Terrence Howard, Vanessa Redgrave