The Adventures of Buckaroo Banzai Across the 8th Dimension (1984) 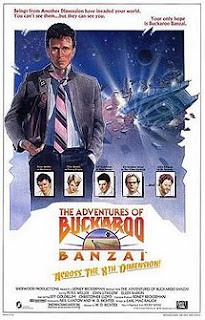 Okay so watching that was strange. If you looked up “cult movie” in the dictionary you would probably see an embedded video of this film. It’s so cult it has literally no interest at all in appealing what so ever to anyone outside of its established sci-fi crowd. If Star Wars was sci-fi for the masses, this is camp sci-fi for the cultish elite.

The plot is almost impossible to relate but Buckaroo Banzai (Paul Weller) is a polymath genius – surgeon, rocket scientist, rockstar – who perfects a device that can travel through solid matter and dimensions. But creating the device makes him a target for a race of aliens, led by Lord John Whorfin (John Lithgow) who live in the gaps between dimensions and want to use the device to escape.

The film is part straight-laced 1940s sci-fi serial, part tongue-in-cheek romp, part comic book, part satire. In fact it’s nearly impossible to categorise, which is certainly in its favour: you’ve certainly never seen anything like it before. It’s bursting with ideas and straight faced humour and clearly had an influence on sci-fi still today (for starters there are more than a few beats of Moffat-era Doctor Who here, while Banzai himself would fit in as The Doctor). It bursts out of the screen with a frentic energy, not massively concerned with narrative logic or consistency, its solely focused on being entertaining. It throws the kitchen sink at the screen with all the passion of fan fiction.

Despite all this I think you have to have a very certain sense of humour and set of interests to really enjoy it – and I’m not sure that I did. If you don’t have an encyclopedic knowledge of comic books and sci-fi you’ll probably feel like you are missing something (and you probably are). I’m also not sure there is much there to attract the “muggle” fan – Weller plays the lead with a smoothness and a charming straightness but he’s not the most interesting of characters (to be brutally honest). Lithgow counter balances him by going utterly over the top in a performance of ridiculous Mussolini-like bombast. But it’s not completely engaging. Basically if you don’t love it within the opening 25 minutes, you aren’t going to won over by anything else that happens. Every frame of the film is setting itself up as a chance for cult fans to speak to each other.

It actually rather feels like you are being invited to a party but then are left with your nose pressed up against the window. All the actors are clearly having a whale of a time with the other-the-top setting and bizarre half-gags. But I’m not sure all that enjoyment really travels across the screen to the viewer. While it’s sorta sweet in it’s almost sexless innocence (Birkin plays the lost twin of Banzai’s wife but there’s never a hint of real sexual buzz anywhere). Characters sport guns and hang around in a nightclub, but Banzai’s gang are essentially a group of 11 year olds who have taken adult form. So it’s gentle and has an innocent chumminess, but also a bit hard to engage with it.

I think in the end I just found it a little too eager and straining to be an outlandish, deliberately cultist film – it’s like an inverted elitest piece of modern fiction, that uses narrative tricks, devices and style to make itself harder for the regular viewer (or reader) to be part of its experience. So while this is something very different and almost insanely off the wall, it’s also something that is never going to move you or appeal in the way Empire Strikes Back will do.
Email ThisBlogThis!Share to TwitterShare to FacebookShare to Pinterest
Labels: 1984, Box office bombs, Christopher Lloyd, Cult movies, Ellen Barkin, Jeff Goldblum, John Lithgow, Paul Weller, Science fiction, WD Richter