Rosencrantz and Guildenstern are Dead (1990) 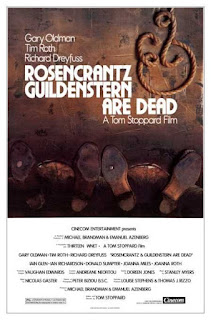 The original production of Rosencrantz and Guildenstern are Dead made Tom Stoppard a sensation overnight. It’s a dazzling high-wire act of theatrical and artistic invention that deconstructs both Hamlet and the nature of theatre itself.

The events of Hamlet are re-told from the mis-understood perceptions of Rosencrantz (Gary Oldman) and Guildenstern (Tim Roth). Their time is spent in discussions about life and struggling to understand their role in both. Throughout, they are prodded towards understanding they are just plot devices by the Player King (Richard Dreyfuss). This film essentially replicates large chunks of the play, with a few humorous editions and revisions and drops it from its theatrical home onto the big screen.

The acting from Roth and Oldman is terrific. The friendship between the actors really comes across in their chemistry with each other, and both are clearly relishing the script. The characters are a brilliant contrast: Roth’s Guildenstern is the bossy, confident driving force who is not as intelligent or incisive as he thinks he is; Oldman’s Rosencrantz is a sweet, passive savant-like follower with flashes of insight he isn’t quite capable of understanding. Both have excellent comic timing, Oldman in particular making his character completely endearing. They also have an affinity with the language that makes the more reflective passages highly engaging. Even if the film isn’t perfect, you should watch it for these two performances – cast against type (neither of them is thought of as a comic actor, or associated with either Shakespeare or scripts like this) both actors are sensational, surely one of the best pairings for any production.

The rest of the cast is also strong. Richard Dreyfuss (a late addition) is witty, larger than life and also subtly sinister as the Player King. Some of the “clips” of Hamlet we see could have made an excellent production, with Glen, Richardson, Sumpter and Miles all giving very strong performances.

Tom Stoppard directed the film at least partly because he felt if he didn’t no-one would. Clearly his experience with actors throughout a lifetime has really paid off, as judging from the excellent performances. What he doesn’t quite have is either a true sense of filmic pace or a real ease with using the camera. Scenes work individually, but the play feels like a series of sketches. So the scenes with the coin tossing, or the questions game (a link below), or the sequences where the players recreate the plot of Hamlet work very well. But the actual plot (such as it is) of the play doesn’t always quite hold the attention – it’s slow paced and the overall impact never equals the sum of those parts.

The attempts to open the play out also don’t really work. The actors move from location to location in Prague castle and some scenes are shot outside, but it feels like just moving stuff from inside a theatre to outside. Other than that it’s basically a staging of the play exact – without really changing or replacing the meta-theatrical devices of the play with filmic contrasts, it feels much more like the filming of a stage production. Saying that, the changes Stoppard made to the script got a mixed reception, but many of them work quite well: in particular a running joke of Rosencrantz accidentally discovering or inventing concepts as wide ranging as the hamburger and Newtonian physics (only to have these discoveries dismissed or ignored by the impatient Guildenstern) frequently raise a smile.

So it’s a stagy and slightly slow piece with some wonderful scenes but overall can outstay its welcome. It’s very clever of course, but that cleverness is so tightly linked to the nature of theatre that its impact can never be the same in another medium. But it has some wonderful scenes and two brilliant performances in the title roles. If you have any interest in theatre or Shakespeare, or admire either of the two leads, watch it. But maybe take an interval.
Email ThisBlogThis!Share to TwitterShare to FacebookShare to Pinterest
Labels: 1990, Gary Oldman, Iain Glen, Ian Richardson, Joanna Miles, Play adaptation, Richard Dreyfuss, Tim Roth, Tom Stoppard