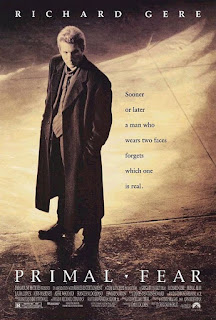 Courtroom dramas are the bread and butter of film drama. You get to deal with good vs evil, right vs wrong – and you even have two advocates on each side there duelling it out on camera for you. Primal Fear came at a time when John Grisham and his like were ruling the bestseller charts, and it’s a fine demonstration of that very late 80s to mid 90s genre: the all-star court case film.

After the murder of a beloved archbishop in Chicago, bloodied altar-boy Aaron Stampler (Edward Norton) is found near the scene. There seems no doubt that he’s guilty. Top city lawyer Martin Vail (Richard Gere) takes his case for the publicity of a big trial, but finds himself believing the boy to be innocent. As the trial begins though, Vail’s psychiatric investigation reveals Stampler has a split personality – his gentle main persona and a violent defensive personality, “Roy”, who admits to the crime.

This is an advanced, well-written trial thriller which, through a combination of some neat lines and some very good performers, manages to bring a lot of life and originality to what could have been a collection of stock characters. Instead, each character in the film feels real and their actions seem part of a coherent personality. The mechanics of the plot also move very smoothly, with a well-handled twist. And as a bonus it has something to say about human nature, about our need to believe in something and how easy it is to tell lies about ourselves and believe them from others.

The film is shot with a good eye for grimy real-life locations and muddy shade-of-grey morality. Hoblit’s direction is crisp and straightforward and he avoids getting any pyrotechnics in the way of the actors – here the performances are the special effects. It’s also a brilliant twist movie that doesn’t telegraph the fact it contains a twist until it suddenly pulls the rug out from under your feet. Hoblit doesn’t give us any advantages over the characters and has the restraint not to show his hand too early – instead he sucker punches us with a sudden downer ending. It’s a masterpiece of genre craft film-making.

Richard Gere at first glance is playing well within his range – a smirking hotshot focused on the win, willing to defend anyone and anything. However, what Gere does really well here is play his persona as an actual persona of the character. The “real” Martin Vail, it becomes clear, is actually almost naïve in his underlying faith in the justice system. He has a touching faith in people and the twist of the film works because we believe how much Vail unwittingly allows himself too be manipulated and conned. He’s the sort of true believer who can playfully mock his faith because his belief in it is absolute. It’s even more crushing, then, when that faith is so cruelly used and abused. The final shot of him alone on the street all but screams “My God, what have I done?”.

But though this film has some of Gere’s best work, this is Ed Norton’s movie. Incredibly, this was Norton’s first ever film, and he seizes the film absolutely by the scruff of the neck. Re-watching the film now, it’s less of a surprise when Aaron’s “Roy” personality bursts out – Norton is so well known now you are almost waiting for him to really let rip – but he nails the contrasts between the stammering, gentle Aaron and the ferocious Roy. You always know which one he is at any time – and even better than that, Norton drops subtle hints throughout to set up the film’s twist (which I won’t give away). His performance is largely a triumph of masterful control of acting tricks and a brilliant demonstration of range, as well as a swaggering display of confidence, rather than a subtle piece of character work, but it’s still an absolute knock out for all that – and totally believable.

Strong performances also come from Laura Linney, making an awful lot of the role of Gere’s courtroom nemesis and part-time lover. Andre Braugher is particularly good as an investigating officer. Alfre Woodward is stern and authoritative but fair minded and just as the judge. Frances McDormand makes what could have been a wet liberal doctor feel like a genuinely caring and dedicated intelligent professional. There isn’t a weak link in the cast, and every character beat feels well observed and natural. How many genre films have failed to manage that?

It all works extremely well and offers all the courtroom fireworks you could want with maximum efficiency. All the actors are working at the top of their game, and the direction keeps the action taut and intriguing. Here’s the thing: the plot makes little sense if you think about it, and Norton’s plan depends on so many variables he could never have known that it would success. But the film is made with such confidence and assurance that it never really matters. The twist still has a lot of impact today – and the film bravely offers no happy endings, only hammers home the system’s corruptness. A very good example (perhaps one of the best) of the courtroom genre.
Email ThisBlogThis!Share to TwitterShare to FacebookShare to Pinterest
Labels: 1996, Alfre Woodard, Andre Braugher, Courtroom drama, Edward Norton, Frances McDormand, John Mahoney, Laura Linney, Richard Gere, Thrillers