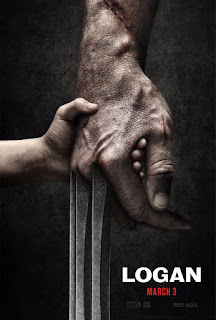 What were you doing 17 years ago? Personally, I was still at school: but Hugh Jackman was being parachuted into X-Men to take on the role of Wolverine after Dougray Scott’s shooting schedule on Mission Impossible 2 forced him to drop out. Since then he has appeared in eight films as the clawed superhero, some good, some shockingly bad – and this is his swansong. Taking a paycut, Jackman wanted to make the Wolverine “you’ve seen in the comics”: did he succeed?

The year is 2029 and mutants are nearly extinct. Logan (Hugh Jackman) lives in Mexico on an abandoned farm, caring for former X-Men leader Charles Xavier (Patrick Stewart), now suffering dementia and brain seizures with lethal effects on those around him. When young mutant Laura (Dafne Keen) arrives needing their help, Logan and Charles find themselves (reluctantly in Logan’s case) on one last adventure, travelling to reunite Laura with other new-born mutants – with a band of lethal mercenaries on their tail. Naturally a string of bodies follows in their wake.

Firstly I think its fair warning to say this is a bone-crunchingly, head-skeweringly, blood-spurtingly violent film. It’s easily more violent than every other X-Men film put together quadrupled. It’s also littered with strong swearing. To be honest, I’m surprised it’s not an 18 certificate – lord knows what strings they had to pull. Mangold’s intention is to show us what battle would actually be like if you were fighting with impossibly sharp knives for hands: limbs are hacked off, chests ripped to pieces, heads are punctured, bits of brain litter the floor.

There is no romanticism of any of this violence – and the film needs to show it, as its primary theme is the impact a life full of this sort of extreme slaughter would have. Even Logan, his regenerative powers severely decayed, stumbles and limps through the action, often totally outmatched by those he fights – even a gang of car thieves get the jump on him in the opening scene. In fact, that scene serves to establish the mood of the film very quickly: Logan is slow and out of shape and eventually has to resort to extreme and brutal violence to desperately end the fight as quickly as possible.

The action in the film is impressively filmed but never triumphalist in execution, and the overriding emotion is pain and sorrow. In many ways, it’s a bleak and depressing film, with precious little hope (it does find some peace and optimism in the final frames, but it’s almost the first time this happens). It has a huge body count, and many of the deaths hit home as both deserving and undeserving suffer. In this world there are no good decisions – whatever Logan decides to do, people around him suffer: and it’s the truth of this throughout his life that has led to such pain behind his eyes. The film’s comparatively small scale compared to previous films in the franchise helps keep the focus intimate and personal.

Its setting of course brings Westerns to mind, but also in its sense of the grim passing of an age. Emotionally, both Logan and Charles are exhausted and struggling under impossible burdens of guilt and sorrow., it’s a nihilist Western, a homage to everything from The Searchers to Unforgiven. Mangold’s direction seizes these contrasts and infuses every frame of the film with visual and stylistic homages to this iconic American genre: even the inclusion of X-Men comic books “in-universe” gives the heroes the feeling of being, Wyatt Earp style, living legends, struggling to carry that burden.

Interestingly this is probably one of the first films that feels like a post-Trump movie. The future America it shows is grim and depressing, with big corporations ruling the roost and the little guy trodden down. The health system is a mess. The film is set partly across the border in Mexico (with brutally tight border control preventing easy passage). A large section of the plot even revolves around a desperate attempt to flee across a border before it is closed down. Of course it’s probably just part and parcel of the standard cinematic crapsack future, but right now the tone and mood of the film feels very much in sync with modern America.

Hugh Jackman is of course front and centre in this film, and you can see straight away this project is a deeply felt one for him. Unlike any other X-Men film before, this is a character study and allows Jackman to first and foremost act. And he is terrific. With Logan’s powers failing, not only is he able to offer a very different physical performance than ever before, he also allows the character’s vulnerability, defensiveness and fear to come to the fore. Jackman explores the continual conflict in the character between his rage and isolation and his empathy and desire to be good. His protectiveness of Charles is balanced throughout by his deliberate distancing himself from Laura, as if he knows anyone whom he allows to get close will suffer. Jackman makes Logan feel old and beaten down, without losing the sense of fire under the surface.

There are in fact terrific performances throughout the film. Patrick Stewart similarly has never had a better written X-Men role in 17 years, and he makes the witty, profane, bitter but still optimistic and kindly Charles Xavier a stand-out. The interplay between him and Jackman is superb, drawing on the emotion of that years of working together on these films. Dafne Keen is a real find as Laura, convincingly feral and never less than compelling, even though she barely speaks for 2/3rd of the film – Mangold’s direction of her is perfect, drawing maximum impact from her performance. She perfectly captures the sense of being a younger version of Logan, struggling to understand the world and the impact of killing: is it any wonder Logan feels uncomfortable looking at her? Boyd Holbook is very good as a dry mercenary while Richard E Grant draws the maximum from limited screentime as a frightingly calm “mad” scientist.

While this is something very different from previous X-Men films, it’s not a perfect film. In terms of violence, I would argue it sometimes goes too far, like an excited child looking to see how far it can push us. It’s main problems are with narrative: far too many plot devices in the film are signposted like Chekov’s Guns, drawn to our attention in a forced way (often twice in case we forgot) so that most audiences could guess where events are going (there is only one real surprise in the film, and that one I defy you to really see coming). Similarly, while the film’s debt to classic Westerns is clear, to have the characters actually sit down and watch Shane seems a little too much (as well as giving a massive hint about the eventual destination this film is heading towards). Mangold’s direction is good but he lacks the profoundity of a Christopher Nolan to give these comic book happenings a shattering depth – their emotional impact comes from our familiarity with these actors in these roles over many years, not quite so much the film itself.

Saying all that, this is something strikingly different and showpieces some terrific performances. It also feels like it has something it wants to tell us about the burdens of violence on a man and how the past always eventually catches up with us.
Email ThisBlogThis!Share to TwitterShare to FacebookShare to Pinterest
Labels: 2017, Boyd Holbrook, Comic books, Dystopia, Hugh Jackman, James Mangold, Patrick Stewart, Richard E. Grant, Stephen Merchant, X-men